A short documentary series created by Bloomberg Philanthropies provide a behind- the-scenes look at how four cities are using temporary public art projects to bring together local government and artists to increase access to the arts, elevate critical issues, foster community engagement and highlight creativity across local industries through the Bloomberg Philanthropies Public Art Challenge. Each of the three-minute shorts, which feature interviews with mayors, artists and cultural leaders working together to develop risk-taking public art projects, showcases the unprecedented levels of contact and cooperation between the arts and civic leaders.

Created to show the challenges and ambitions behind the cities selected to participate in the foundation’s Public Art Challenge, the video series can be viewed on YouTube via the hyperlinked titles below. Additionally, these and other videos are available on bloomberg.org.

In this video, Gary, Indiana Mayor Karen Freeman-Wilson discusses the economic, political and social challenges that have affected the city and introduces a culinary and visual arts center conceived by artist Theaster Gates with an innovative approach to addressing the complex challenges facing Gary.

Seeing Spartanburg in a New Light 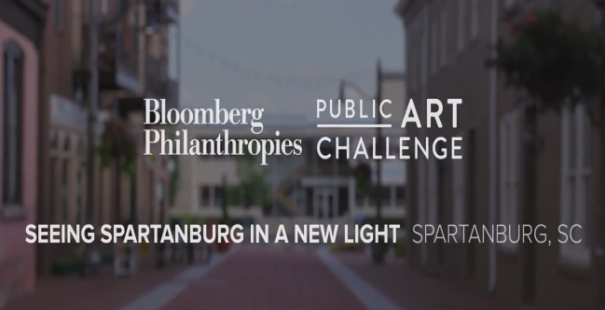 Spartanburg, South Carolina’s project uses public art to promote crime prevention and as a catalyst for building police-community relations. As interviews with police officers show in this documentary, the light-based project, designed by artist Erwin Redl, is already bringing together residents and law enforcement officials.

Los Angeles’ first-ever public art biennial included 13 artists presenting challenging ideas around the topic of water. In this video, Danielle Brazell, manager of Los Angeles’ Department of Cultural Affairs, and participating artists explain how the arts and creativity can be deployed to change perceptions and behavior around one of the city’s most pressing issues.

Bloomberg Philanthropies has supported innovative public art projects in cities around the world. On October 13, 2014 Bloomberg Philanthropies announced the launch of the Public Art Challenge, a new program to fund temporary public art projects in cities across the U.S.  The foundation invited mayors in cities with 30,000 residents or more to submit proposals for innovative temporary public art projects that have the potential to catalyze urban growth, promote creativity, drive local economy, and add to the vibrancy of cities.  Submissions for visual and performing arts, including multimedia installations, were considered.

Out of 237 city applications, the cities of Gary, IN; Los Angeles, CA; Spartanburg, SC; and a partnership between Albany, Troy and Schenectady, NY were awarded $1 million from Bloomberg Philanthropies’ Public Art Challenge to execute their projects. The Los Angeles’ project CURRENT: LA Water ran from July 16 – August 14, while the other cities will open in the fall.