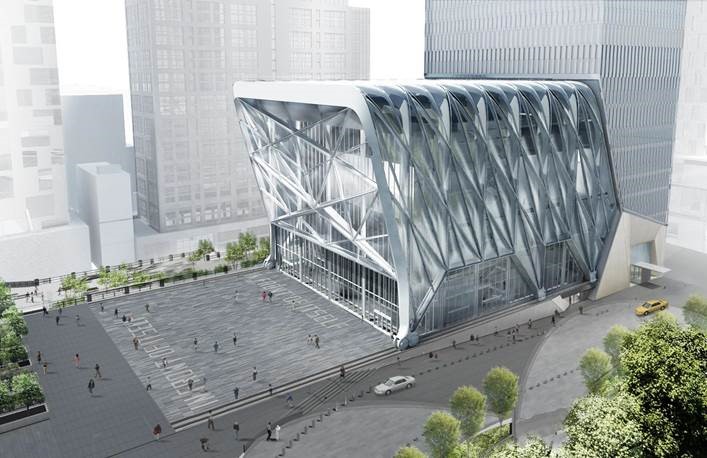 Daniel L. Doctoroff, Chairman of the Board of Directors, and Alex Poots, Founding Artistic Director and CEO of New York’s new center for artistic invention, The Shed, today announced an extraordinary lead gift from Bloomberg Philanthropies of $75 million toward the capital campaign for the new institution. Currently under construction on Manhattan’s west side, where the High Line meets Hudson Yards, The Shed is scheduled to open to the public in spring 2019.

“We are immensely grateful to Mike Bloomberg and Bloomberg Philanthropies for this extraordinary gift,” Poots said. “It is an emphatic vote of confidence in our vision for New York’s iconic new home for artistic invention, experimentation, and collaboration, where we plan to commission, produce, and present works from across the performing arts, visual arts, and popular culture.”

“I’ve always believed the arts have a unique ability to benefit cities by attracting creative individuals of every kind, strengthening communities, and driving economic growth,” said Mike Bloomberg. “The Shed will help New York achieve all three goals, and its unique design will help keep our city at the forefront of the future of arts and culture. Having been a champion of it from its conception, I’m honored to help see it through to completion.”

The Bloomberg gift brings the total funds raised for the project to $421 million of the $500 million capital campaign goal. Daniel L. Doctoroff, Chairman of The Shed’s Board of Directors, said, “In an age when artists are working across disciplines, across geographies, and across the boundaries between culture and science, The Shed aspires to be the most connected and flexible cultural institution in the world. We proudly accept this gift in acknowledgment of Mike Bloomberg’s passion for the arts and profound commitment to New York City.”

Alicia Glen, New York City’s Deputy Mayor for Housing and Economic Development, said, “We’re excited to see the cultural anchor to Hudson Yards taking shape. This is going to be a phenomenal space for art and a beautiful attraction for the neighborhood. We are appreciative of Bloomberg Philanthropies for their generosity in advancing this project.”

“Art and culture are written into New York’s DNA, so we’re thrilled to see culture at the very heart of Hudson Yards as it transforms into New York’s newest neighborhood,” said New York City’s Cultural Affairs Commissioner Tom Finkelpearl. “I applaud Bloomberg Philanthropies for their commitment to bringing this remarkable new cultural facility to life.”

The gift comes in the same month as a major construction milestone for the project—the completion of all structural steel installation for the innovative and flexible $435 million building, designed by Diller Scofidio + Renfro in collaboration with Rockwell Group. The Shed features a telescoping shell on rails, which will enable the structure to expand or contract to accommodate the needs of a vast range of performance, visual art, events, and multidisciplinary work. The building can physically transform to support artists’ visions and enable collaborations across disciplines under one roof.

Among his announcements today about the artistic program, Alex Poots unveiled details of the organization’s first visual art commission: a large-scale, site-specific work by one of the world’s most influential artists, Lawrence Weiner (b. 1942). Fabricated with custom paving stones embedded in the building’s plaza—an area that will serve as a walkable outdoor area when the movable shell is nested over the fixed part of the building, or as the base of its largest program space when the shell is extended to the east—the 20,000-square-foot work is titled IN FRONT OF ITSELF and will feature the phrase in 12-foot-high letters. Weiner said, “The work is not a parallel reality. It is a simultaneous reality that requires no hierarchy.”

The artistic program of The Shed has already begun with a free, citywide residency program in dance activism for young people, FlexNYC, in collaboration with Reggie “Regg Roc” Gray and the D.R.E.A.M. Ring (Dance Rules Everything Around Me) flexn dancers. Through flexn, a form of street dance with roots in Jamaican Bruk Up, students explore issues of social justice while developing their capacity to express themselves and confront challenges. With the first year of the FlexNYC program now complete, Poots announced that it will expand later this year to all five boroughs, serving approximately 300 students at 20 sites. In addition to partnering with public schools and New York City Housing Authority community centers, FlexNYC will also begin to partner with the city’s Beacon youth programs to provide after-school activities.

The Shed’s commitment to early-career local artists also extends to its creative lab, a dedicated space in the building for experimentation and creative support, which will be accessible year-round, free of charge.

Poots also announced that The Shed’s Chief Science and Technology Officer, Kevin Slavin, has begun collaborative projects with faculty and staff at the MIT Media Lab, where he is a Research Affiliate, and through a fellowship program to be developed within the creative lab. These efforts will enable artists to access the latest developments in fields such as virtual reality, synthetic biology, artificial intelligence, and location-based technologies so they can create new ideas and images for our time. According to Slavin, “The mission of The Shed includes taking science and technology out of their isolation as either instrumental to commerce or isolated in academia and into their most meaningful expressions as culture,” a goal that is enabled by the unique and flexible infrastructure of the building.

With its variable program and spatial elasticity, The Shed can physically change at will. The building is spontaneous and responsive to myriad artistic ideas.

With references to Cedric Price’s unbuilt, “anti-building” of the 1960s, the Fun Palace, the architects’ design for The Shed’s 200,000-square-foot home comprises an eight-level base structure and a telescoping outer shell. The base building holds two expansive, column-free galleries totaling 25,000 square feet of museum-quality space; a 500-seat black-box theater that can be subdivided into even more intimate spaces; event and rehearsal space; and a creative lab that will be provided free to early-career local artists. The telescoping outer shell can be deployed over the adjoining 20,000- square-foot plaza to create a 17,000-square-foot light-, sound-, and temperature-controlled hall that can serve an infinite variety of artists’ needs and uses, including as a theater seating 1,250 people or a standing audience of up to 3,000 people. Its ceiling acts as a theatrical deck, allowing for rigging across the entire volume of space above performers and audiences, as well as light and sound control. When the space is not needed, the shell can nest over the base building, freeing the plaza for outdoor use and programming.

“It’s thrilling to be part of this brave new project that’s inventing all the rules,” said Elizabeth Diller. “The opportunity to design a ground-up building for the arts forced the question, What will art look like in the next 10 years? 20 years, and beyond? The answer was that we simply could not know. All that we could be certain of was that there would always be a need for conditioned space of different heights and sizes, a need for structural loading capacity, and a need for electrical power. The solution was, an architecture of infrastructure.”

“We questioned how we could build in flexibility that is liberating and not constraining to the building’s function and would achieve the best possible conditions for the creation of new work,” said David Rockwell. “We found a way to create a center for the arts that is as useful for performing artists as it is for visual artists and popular artists.”

Weighing more than 4,000 tons when fully loaded with building systems and production equipment, the movable shell will travel on a double-wheel track based on gantry crane technology commonly found in shipping ports and railway systems. A rack-and-pinion drive will move the shell forward and back on four single-axle and two double-axle bogie wheels that measure six feet in diameter. The deployment of the shell will take five minutes at a maximum speed of a quarter mile per hour, with systems run by secure wireless remote and back-up hardware controls.

The exposed steel diagrid frame of the movable shell will be clad in translucent pillows of durable and lightweight Teflon-based polymer, called ethylene tetrafluoroethylene (ETFE). With the thermal properties of insulating glass at a fraction of the weight, the translucent ETFE will allow light to pass through and can withstand hurricane-force winds. Measuring almost 70 feet in length in some areas, The Shed’s ETFE panels are some of the largest ever produced.

About The Shed
Opening in spring 2019, The Shed will be New York’s first multi-arts center designed to commission, produce, and present all types of performing arts, visual arts, and popular culture. Driven by experimentation, innovation, and collaboration, The Shed will be a center for artistic invention, bringing together leading artists working in every art form with leading minds in the humanities and sciences. The program will be international, created with co-commissioning partners around the globe, and local, with early-career artists in residence in The Shed’s creative lab.

Located on the west side of Manhattan where the High Line meets Hudson Yards, the unique and flexible building can physically transform to support artists’ visions and the work they create—from hip hop to classical music, visual art to literature, film to theater and dance—with collaborations across these disciplines and beyond, all under one roof. For more information, visit theshed.org.