By Dr. Camila Corvalán, University of Chile’s Institute of Nutrition and Food Technology

Countries around the world are facing a health crisis as rates of obesity and being overweight are increasing – and Chile is no exception. Chile has among the highest rates of obesity in Latin America: 66 percent of Chilean adults and 34 percent of Chilean children are obese or overweight. Since the 1980s, the typical Chilean diet changed from predominantly natural foods to being dominated by ultra-processed foods, which are higher in calories and sugar. In 2014, Chileans had the highest per-person daily calories from sugary beverages in the world.

With the understanding that our food environment influences what we eat, the Chilean government took decisive policy action to make choosing healthier foods easier. In June 2016, Chile began implementation of a first-of-its-kind policy that combined warning labels on unhealthy foods with restrictions on unhealthy food marketing.  My colleagues and I from Universidad de Chile, along with collaborators from Universidad Diego Portales, Universidad Central de Chile, and the University of North Carolina, are engaged in a comprehensive evaluation of this innovative policy with funding support from Bloomberg Philanthropies. This evaluation will provide unprecedented insight into how regulatory actions can influence food environments and children’s dietary behaviors. This knowledge will be vital for the vast majority of countries worldwide experiencing similar obesity and non-communicable disease (NCD) problems.

Let’s take a closer look at the policy, which has four key components:

1. To better inform consumers, the government mandated that any foods or beverages exceeding a certain level of sugar, sodium, saturated fat, or calories must carry a warning label identifying the excess.

A Label reading “High in Calories, High in Saturated Fat, High in Sugars”

2. To counteract the aggressive marketing of unhealthy foods and beverages to children, products that carry the warning label are prohibited from using any licensed or brand character, toy or giveaway, or child-targeted imagery. Characters like Tony the Tiger can no longer be used to sell sugary cereal. 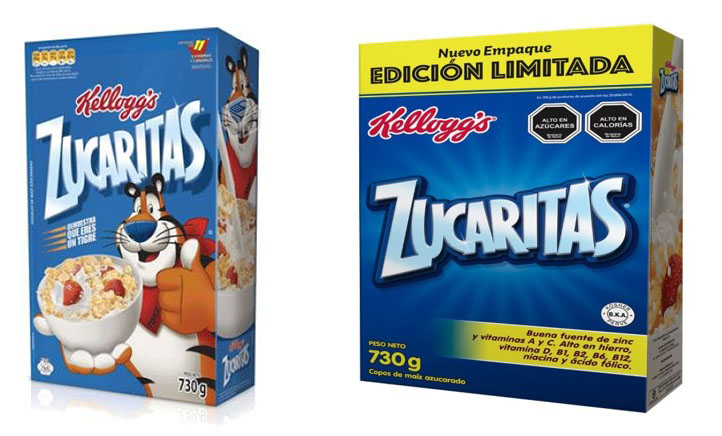 3. Unhealthy products that carry warning labels cannot be advertised on television or on websites aimed at children under 14 years old. But because children are exposed to television beyond children’s programming, the advertising ban will expand later in 2017 to cover all TV between 6am-10pm, plus movie theaters.

4. The law also limits the availability of unhealthy foods at preschool and school settings.

Before and After: How Public Policy Can Improve Our Food Environment & Children’s Health

In order to have a comprehensive understanding of the impact of the policy, we’re examining nutrient content of food, children’s exposure to advertising, and behavior of and health impact on children.

In 2015, before the policy was implemented, we captured nutrition content for 5,000+ packaged foods and beverages. Baseline analyses showed that 63 percent of the packaged foods surveyed would be classified as unhealthy based on the policy’s initial nutrition standards (this number will increase to about 83 percent as standards become more stringent, based on the policy’s incremental rollout). Additionally, analysis revealed that beverage products with a child-friendly character had more sugar and calories than beverages without a character. We are continuing to monitor the food environment, tracking changes in nutrition, and packaging post-policy.

In the case of TV, a baseline analysis of two months of TV programming from eight popular channels indicated that children see a lot of food ads for sweet and savory snacks (22 percent of total ads) and sugary drinks (12 percent of total ads), and about two out of three food ads include strategies attractive to children. We will continue this evaluation with new programming recorded each year now that the policy has been implemented.

Finally, we are following 900+ preschoolers and 700+ adolescents over time to link the environmental changes due to the policy to their food knowledge and perceptions, diet, and weight.

Reducing the burden of obesity is a big challenge, but increasingly policies like Chile’s have become instrumental in creating healthier food environments and can help to move the needle on obesity prevention and reduction.

Dr. Corvalán is an Assistant Professor at the University of Chile’s Institute of Nutrition and Food Technology (INTA) where her research focuses on the impact of diet on health, obesity, and metabolic disorders, particularly in childhood. Dr. Corvalán earned her Doctor of Medicine (MD) and a Master of Public Health (MPH) at University of Chile and her PhD in nutrition at Emory University.