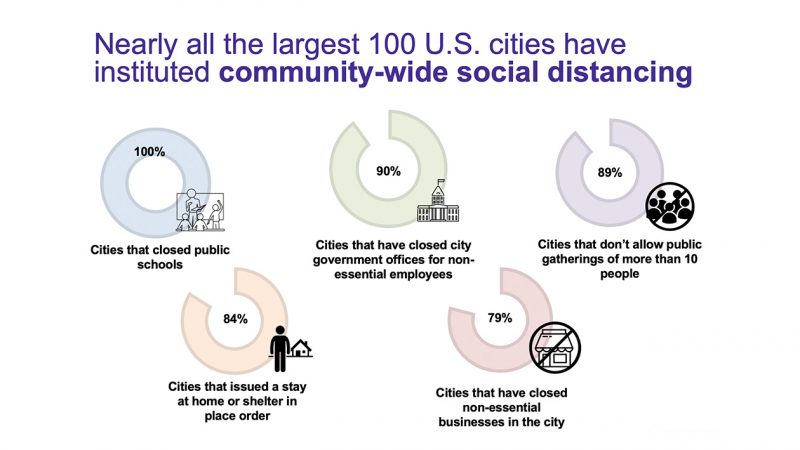 When President Trump hit “send” on a trio of tweets that encouraged Americans to “LIBERATE” themselves from strict social-distancing measures, he did more than spark what could become a firestorm. He also put the country’s mayors—hundreds of whom have taken decisive action to institute those orders in order to protect their residents—in a wholly unfamiliar situation: Caught between the best advice of public-health experts and the biggest bully pulpit in the world.

The ramifications were reflected on the front pages of nearly every newspaper: Protestors hit the streets of Lansing, Mich., Salt Lake City, Utah, and dozens of other cities—including Denver, where doctors and nurses dramatically stood in their way. But what is too often lost in the rush of the headlines is the fact that the majority of Americans (76 percent) support social-distancing measures. And the mayors who, after difficult and careful deliberation, issued many of those orders aren’t backing down now.

Now we’re beginning to see the benefits of these efforts. The Bay Area has emerged as a national model of prevention, with San Francisco Mayor London Breed instituting social distance policies before the city confirmed any cases of COVID-19. And in Seattle, Mayor Jenny Durkan’s early social distancing measures—like having non-essential employees work from home—helped the city cut in half the “effective reproductive number” or transmission rate, from 2.7 in late February to 1.4 in mid-March.

That’s why so many mayors are digging in their heels and reasserting their reasons for following the advice from health experts like former CDC Director Tom Frieden, who’s said that it’s data—not a date—that will determine when cities should re-open.

In some cities, that resolve has manifested itself on social media: In Richmond, Va., Mayor Levar Stoney reiterated his commitment to the city’s shelter-in-place order by tweeting, “The campaign to ‘reopen America’ is a misguided, premature farce…no economic gain is worth risking the lives of our residents, and no resident will be left behind when we rebuild.”

In others, including the Georgia cities of Albany, Augusta, Atlanta, Macon, Milledgeville, and Savannah, mayors are speaking out against moves by their governor to rollback social-distancing measures beginning today. Atlanta mayor Keisha Lance Bottoms said Governor Brian Kemp’s decision wasn’t based on “anything logical,” adding “we see our numbers continuing to tick up in this state [and] we see that our deaths are rising.”

In Chicago, meanwhile, Mayor Lori Lightfoot is leveraging anonymized data from cell phone movement to empirically show the positive impact of social distancing. Chicago residents stayed home nearly 80 percent of the time last week, correlating to a decreased rate of COVID-19 infections. “As encouraging as these numbers are, the light at the end of the tunnel is only a pinprick, and we will need continued diligence and social compliance before we can bend the curve and outrun this crisis,” Lightfoot explained.

The COVID-19 crisis is unchartered territory. No mayor, or governor, or president has been here before. There are, however, time-tested and proven strategies that apply to crises and public-health emergencies of all kinds, including COVID-19. That’s exactly why Bloomberg Philanthropies, as part of our COVID-19 Local Response Initiative, partnered with Harvard and Johns Hopkins universities to create weekly online coaching and learning sessions that connect mayors with the best experts and advice out there. Over the past five weeks, more than 260 mayors, representing every corner and political stripe in the country, have attended a session. More than half of them have attended three or more sessions.

I’ve always been believer in the power of local leaders, but watching these mayors engage in the virtual sessions every week—and then seeing them put what they’ve learned into action in real time—makes me more confident than ever in the people fighting for us on the frontlines. It’s abundantly clear that they’re prepared to make the on-the-spot and informed decisions that this unprecedented pandemic demands. And, as we see more and more every day, they’re ready to stick to their guns if and when political winds get in the way.