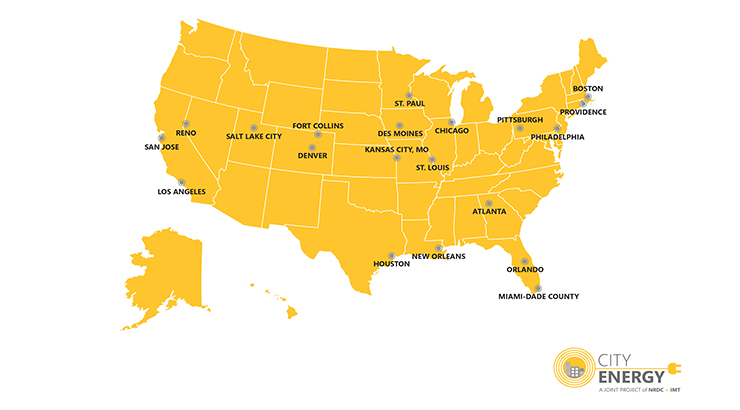 Now more than ever, cities are taking the lead when it comes to acting on climate change. Last May, Melissa Wright took to our blog to tell the story of the City Energy Project, a nationwide initiative co-funded by Bloomberg Philanthropies, the Kresge Foundation, and the Doris Duke Charitable Foundation to address the largest source of pollution and energy use in cities, namely buildings.

The Institute for Market Transformation and Natural Resources Defense Council recently announced that 10 new cities were joining the City Energy Project, committing to a now 20-city effort across the United States to improve the energy efficiency of large buildings. Together, by the year 2030, these cities can save more than $1.5 billion in energy bills per year while reducing carbon pollution akin to taking two million cars off the road for a year.

It may come as a surprise that buildings have such a large footprint, but in fact they are responsible for 40 percent of emissions nationally – largely due to their energy consumption. In almost every major city in the country, buildings consume more energy and account for more carbon pollution than any other end-use sectors such as transportation or industry. If U.S. buildings were considered a nation, they would rank third in global energy consumption, using more primary energy than all major energy consuming nations except the U.S. and China.

Given this, cities are uniquely positioned to find high-impact, local solutions to address the inefficiency of their building stock that can be easily integrated into existing sustainability plans. Done right, this will not only reduce energy costs and cut carbon pollution, but help to boost local economies.

The results are policies and initiatives that can include financing programs for building improvements, challenge programs for the private sector, building “tune-ups” (or retrocommissioning), and improved energy code enforcement. For example, relatively simple improvements in how buildings are operated – lights off and heating and cooling systems turned down when no one is present – can account for roughly half of all energy efficiency advances.

Just as important as the technical support the City Energy Project provides is the platform for peer-to-peer sharing of lessons learned and best practices that are offered to the 20 participating cities. The 10 new cities now join Atlanta, Boston, Chicago, Denver, Houston, Kansas City, Los Angeles, Orlando, Philadelphia, and Salt Lake City in this learning network. With a diverse array of small, medium, and large-sized cities from across the country contributing inputs, we can work to ensure economies of scale and better results. Moving forward, the success of these early adopters will be shared even more broadly, making it easier for other interested cities to learn from their peers and design plans that will maximize impact in their communities.

Bloomberg Philanthropies is proud to support the 10 mayors that joined the City Energy Project this week and share their commitment to bringing together community advocates, local government officials, and the private sector to find energy efficiency solutions that are both bold and, even more importantly, effective.