Brussels – A new study led by Les Chercheurs d’Air, in partnership with Brussels Environment and with the support of Bloomberg Philanthropies and 19 Brussels municipalities, reveals that schools in Brussels are exposed to nitrogen dioxide (NO2) levels that exceed the new World Health Organization (WHO) global air quality guidelines.

Measurements of nitrogen dioxide – a pollutant for which road traffic in the Brussels Region is 60% responsible – were carried out over a period of 12 months (November 2020 – October 2021), at 134 locations, including 67 schools, 2 kindergartens, and through 54 Brussels residents who participated in the study. The findings indicate that NO2 pollution concentrations are higher than the WHO guidelines – set at 10µg/m3 annual average concentrations – at each and every one of the 134 locations throughout the Brussels Region, some by more than threefold.

The same findings apply at the locations measured by the 54 Brussels residents. All of them are also exposed to NO2 levels above the WHO guidelines. For instance, the NO2 levels were exceeded by more than four times at Rue Dansaert, and a measurement point located on Boulevard du Jardin Botanique recorded an average concentration of more than 50 μg/m³. 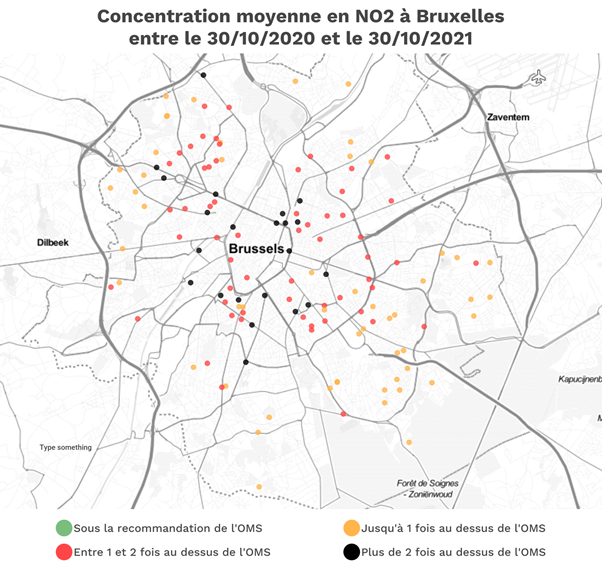 Pierre Dornier, President of Les Chercheurs d’Air, said: “Despite COVID restrictions and a reduction in road traffic levels, the main source of NO2, the air in Brussels remains too polluted. Children, who are still growing, are particularly vulnerable to this pollution. It is neither normal nor acceptable that so many schools are exposed to NO2 concentrations dangerous to public health. It is urgent to accelerate the implementation of ambitious measures, such as the deployment of new school streets and the reinforcement of the low-emissions zone to improve air quality in the Brussels Region.”

Of the 134 locations where testing took place, 132 of them have promised to comply with the European annual limit value of 40 micrograms per m³ – a limit which must be respected under penalty of possible sanctions from Europe. Two sites located on the Brussels ‘petite ceinture’, a highly trafficked roadway in the city’s center, exceeded the agreed upon levels with concentrations of 45 and 52 μg/m³. Discussions are currently underway at European level to align these measurements closer to WHO guidelines to help better protect the health of citizens.

Olivier Brasseur, air quality expert at Bruxelles Environnement, said: “This campaign has enabled us to strengthen our knowledge of air pollution and identify areas at risk. This is key to acting effectively against air pollution. Polluted areas are mostly found on streets with heavy road traffic and canyon-like geometry, i.e. narrow streets bordered by tall buildings. This campaign also demonstrates how passive tubes can complement and fortify our current monitoring network system of 10 stations, including two recently installed on the Brussels ‘petite ceinture’.

Alain Maron, Brussels Minister for Climate Transition, the Environment, Social Action and Health, said: “This innovative measurement campaign has enabled us to work hand in hand with citizens,  to identify in more detail pollution hotspots in our city. The results are alarming and should encourage us, at all levels of power, to strengthen our efforts to improve the quality of the air we breathe every single  day and reach the WHO guideline values. This is critical because air pollution has a significant impact on our health. A secondary measurement network will be made permanent, and ambitious measures will be taken to better protect the health of Brussels residents, in particular the most vulnerable, such as children and the elderly. »

Antha Williams, who leads Climate and Environment programs at Bloomberg Philanthropies said: “Every child in Brussels deserves to breathe clean air, yet that is unfortunately not the current reality. This report shows the critical importance of tracking air pollution in cities and collecting data to identify where action is most urgently needed to combat its harmful impacts. At Bloomberg Philanthropies, we recognize that cities are at the forefront of solutions to safeguard citizens, particularly those most vulnerable, from being exposed to harmful pollution. By working with cities like Brussels, as well as London, Paris, Delhi, and Jakarta, we hope to empower local governments and civil society with the necessary data to take more aggressive action to combat air pollution and protect the health of all citizens.”

This citizen science measurement campaign led by Les Chercheurs d’Air is part of the Brussels Clean Air Partnership. This partnership, launched in 2021 by the Bloomberg Philanthropies, the Government of the Brussels-Capital Region and Brussels Environment, brings together various Brussels air quality initiatives, such as Cureuzenair and Babel’Air. The results of the Curieuzenair campaign, carried out in 3,000 places in Brussels for one month, will in particular complement this campaign. The results are expected mid-March.

1 The measurements are taken using so-called “passive” tubes analyzed by the Passam accredited laboratory. The results are then analyzed by the Brussels Environment laboratory. Among the 134 participants are 54 citizens who were selected because they live near a main road