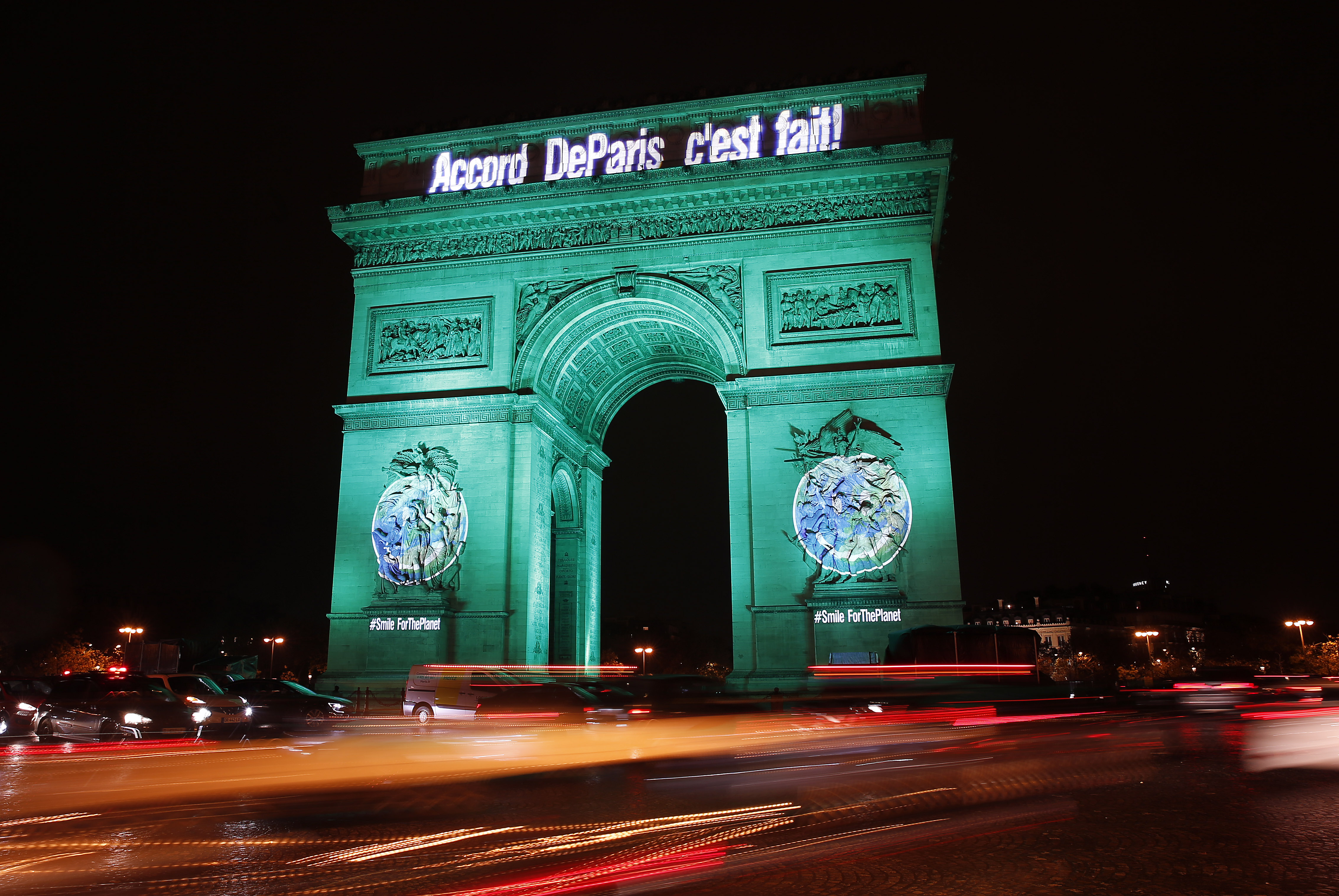 The Arc de Triomphe was illuminated in green with the words "Paris Agreement is Done" on November 4, 2016 in Paris, France. Several Parisian monuments were illuminated in green to celebrate the first day of the application of the Paris COP21 climate accord. (Photo by Chesnot/Getty Images)

By Antha Williams, Global Head of Climate and Environment Programs at Bloomberg Philanthropies

There’s no doubt that 2020 has been a transformative year which has forced us to examine the ways our systems and institutions must change in order to support a sustainable, justice-oriented society.

This has been more pronounced than ever when it comes to the issue of climate change, with the effects often disproportionately impacting low-income communities and communities of color. 2020 saw a record-breaking hurricane season, an elongated wildfire season where devastating, massive fires caused an estimated $10 billion in damage in California alone, and science suggests this year will surpass 2016 as the hottest ever recorded. Meanwhile, the public health costs of burning fossil fuels have never been more apparent. New studies have shown a direct correlation between breathing polluted air and succumbing to COVID-19, adding to the myriad health impacts that pollution is responsible for worldwide.

At Bloomberg Philanthropies, we’ve spent this year working with governments, organizations, and researchers around the world to advance action on climate and promote renewable energy, yielding tremendous progress despite a global pandemic.

As we head into 2021 and continue to face the climate crisis head-on, here are seven milestones in 2020 that point to our ongoing progress on climate:

In the United States, we elected Joe Biden and Kamala Harris, who have a comprehensive plan to address the climate crisis.

The incoming Biden/Harris administration is committed to advancing U.S. leadership on climate. Their focus on decarbonizing the power sector and addressing emissions in buildings and transportation will help the U.S. pursue deep emissions cuts and systemic change in 2021 and beyond. Progress can already be seen in the diverse and progressive leaders appointed for top climate positions in the administration, like Michael Regan, Gina McCarthy, Secretary Kerry, and Rep. Deb Haaland.

We continued the climate action fight with U.S. cities, states, and businesses to move Beyond Coal and Beyond Carbon.

Bloomberg Philanthropies’ America’s Pledge report showed that cities, states, and businesses have kept the U.S. on a path of climate progress. As the Sierra Club’s Beyond Coal campaign continued to announce coal plant retirements (hitting 338 retirements in total), cities like San Jose passed legislation to require new commercial and residential buildings to be all-electric. In Columbus, residents voted overwhelmingly to support a ballot measure to allow themselves to aggregate their buying power to purchase clean electricity at bulk rates.

World leaders continued to guide us away from fossil fuels and towards low- and no-carbon energy sources.

Following the EU’s European Green Deal, a plan to make Europe carbon-neutral by 2050, countries around the world stepped up to accelerate climate progress. China, South Korea, and Japan all committed to net-zero carbon goals this year, and in South Korea and Japan, their ambitious targets will be advanced by the work to phase out coal by two newly-launched Beyond Coal campaigns. Governments gathered this month at the Climate Ambition Summit to double down on commitments in advance of COP26. At the summit, China announced it would reduce carbon emissions by “at least 65 percent” by 2050 — a significant commitment from the world’s largest carbon emitter.

Cities around the world continue to step up and show the potential for bottom-up action to advance climate goals.

In November, as the U.S. formally withdrew from the Paris Agreement, our targets remained within reach thanks to the ongoing collaboration between the public and private sector to minimize emissions. Our latest report with the Rocky Mountain Institute showed that a city-led green infrastructure package can bring about a healthier, safer, and greener America in the aftermath of COVID-19. A new report from C40 cities highlighted Boston, Los Angeles, Portland, Seattle, and Washington, D.C. These American Cities Climate Challenge members are already well on their way to meet science-based targets that align with the Paris Agreement. Mayor Anne Hidalgo also celebrated these cities at the Paris Zero Carbon Forum this month, saying their work “marks an important milestone in our efforts to accelerate climate action and demonstrates the incredible leadership from cities on this issue.”

Climate work is being elevated and strengthened, globally.

This year saw an influx of new support towards climate work, from Prince William’s Earthshot Prize to Jeff Bezos’ $10B Earth Fund. Meanwhile, recognition for climate innovation is growing in the public sphere – like Climate TRACE from the Centre for Research on Energy and Clean Air, listed as one of TIME’s Best Inventions for 2020.

The importance of climate risk disclosure has taken center stage.

Five years after establishing the Task Force on Climate-related Financial Disclosures (TCFD), more than 1,600 organizations, representing a market capitalization of $15 trillion, have expressed support for TCFD recommendations. Countries like the UK and New Zealand have introduced mandatory climate risk disclosure under TCFD guidelines — and Biden and Harris can make a big impact by endorsing the TCFD on their first day in office.

The COVID-19 pandemic and the fight for racial justice revealed that the world’s largest challenges are exacerbated by climate issues.

In addition to contributing to asthma, heart, and lung disease, we now know that climate pollution exacerbates the symptoms of COVID-19. Studies have also shown that climate change disproportionately impacts people of color, making environmental justice a key component of racial justice. This year has laid bare the connections between the climate crisis and the other systemic challenges we face, which means we’re more prepared to address them together.

Whether it’s for our future, public health, or the planet, the time for climate action is now. As devastating as this year has been, it has also allowed us to build new systems from the ground up. If we can work together to build on the strong foundation created from cities, states, and businesses’ leadership, we can make 2020 a catalyst for a more sustainable, just, and inclusive world in 2021 and beyond.