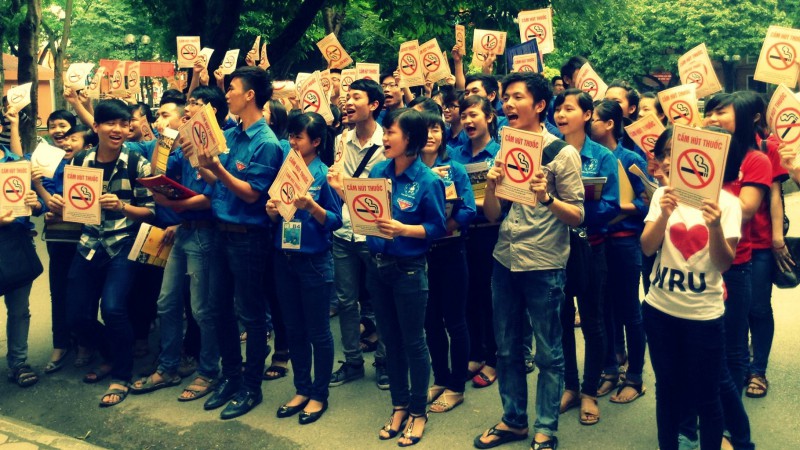 Today is World No Tobacco Day, a day that highlights the importance of reducing tobacco use across the globe. Bloomberg Philanthropies’ representatives spent the run up to this important landmark in Vietnam, which recently brought into force a new tobacco control law.

Mike Bloomberg, a strong anti-tobacco advocate whose efforts to curb tobacco use in New York have contributed to an increase in life expectancy, sent his congratulations to Prime Minister Nguyen Tan Dung on the enactment of the new law. In addition to creating smoke-free public places and workplaces, Vietnam is banning advertising and promotion by tobacco companies, and requiring large graphic health warnings on tobacco packaging.

Earlier this month, our team participated in public and private events that promoted the new law and further tobacco control measures. In Hanoi, our team watched as students waved banners informing the public of the health impact of smoking during a bicycle parade that passed in front of the Hanoi Opera. Bloomberg Philanthropies was invited to make a presentation inside the Opera, itself, at an event organized by the Vietnam Steering Committee on Smoking and Health. The week’s activities were hosted by Vietnam’s Ministry of Health and the World Health Organization, a Bloomberg Philanthropies partner.

The impressive participation during the celebration reflects the broad base of support for Vietnam’s new tobacco control law. The law is being launched with strong backing from local governments throughout the country, the Labor Union, the Youth Union and several civil society partners. Events like the bicycle parade raise awareness of the significant changes in social norms that are taking place in a country where nearly half of men are smokers.

More help for smokers in Vietnam is coming in the shape of a tobacco control fund that will finance cessation services to make quitting easier. The fund will also contribute to the costs of public education and awareness building. More than 40,000 Vietnamese die each year from tobacco related disease. The new law should reduce tobacco use and exposure to second-hand smoke, and lead to longer healthier lives for the people of Vietnam.

Following the parade and event at the Hanoi Opera, Bloomberg Philanthropies met with Vietnamese and international partners and grantees in Hanoi to discuss what support is needed to ensure successful implementation of the tobacco control law and to keep the momentum going. We will continue to work with our partners in Vietnam and around the world to reduce tobacco use through proven strategies.