What It Takes to Serve 500,000 Meals to Front Line Workers in NYC’s Public Hospitals – A Look into the Bloomberg Philanthropies and World Central Kitchen Partnership

In response to the COVID-19 pandemic that has engulfed New York City, on April 15, Bloomberg Philanthropies and World Central Kitchen, the international nonprofit founded by Chef José Andrés, came together to ensure frontline workers at 16 of the NYC Health + Hospital facilities hardest hit by the crisis would have fresh, healthy meals seven days a week. Less than one month since the initiative to provide up to one million meals launched, 500,000 meals have been served, made possible by a $6 million contribution from Mike Bloomberg.

Food service and distribution have been done in partnership with a dozen local restaurants, national chains, caterers, and New York’s beloved food truck operators from all five boroughs. This has provided paid jobs for more than 200 previously unemployed food service workers and provided relief and encouragement – along with gourmet meals of chicken tinga bowls, lasagna, turkey picadillo, BBQ pulled pork, vegetable stir fry, and more — to some of New York’s greatest heroes.

Chef Grace Ramirez of World Central Kitchen (WCK) jokes that their motto should be “it’s the little things.” While WCK’s work with Bloomberg Philanthropies is anything but small, many individual critical decisions are being made daily to ensure the safety of both WCK workers and the frontline staff they’re serving — and to bring smiles and minimize stress during these trying times.

Food distribution at each hospital or care facility is organized slightly differently, although at all locations a representative or two from each department  is sent down to wait in a socially distanced line and collect the meals, making sure health care workers aren’t spending more time in line than necessary. 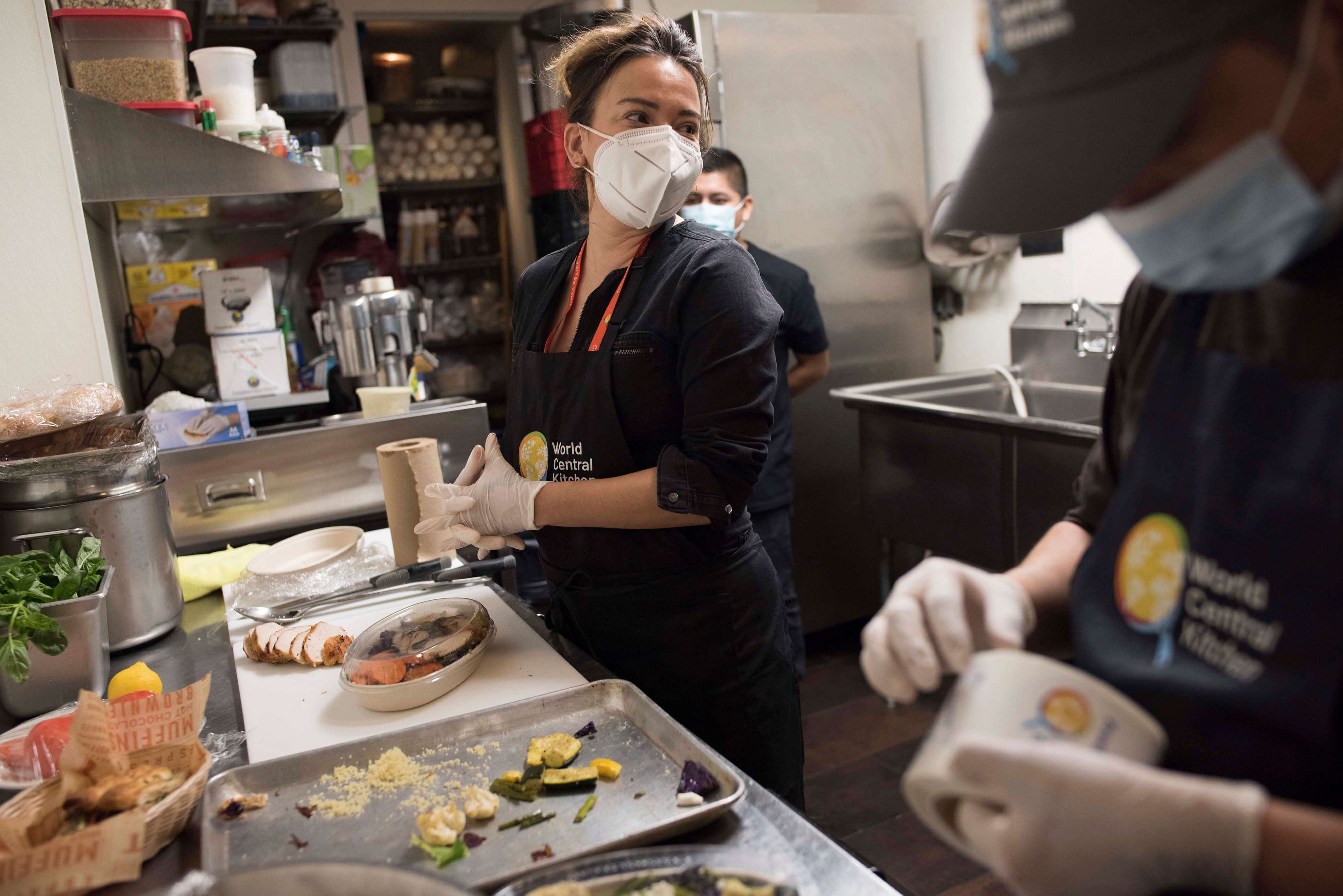 In the NYC Health + Hospital Harlem facility, 3,000 meals a day are prepped in food trucks outside the hospital. The meals are served inside by four young World Central Kitchen staffers – former NYC restaurant employees who were laid off as a result of the pandemic – who live close by. They are thrilled not only to be employed, but to be doing work that feels so meaningful.  In all locations, the systems work.  The line moves smoothly, and no time is wasted. 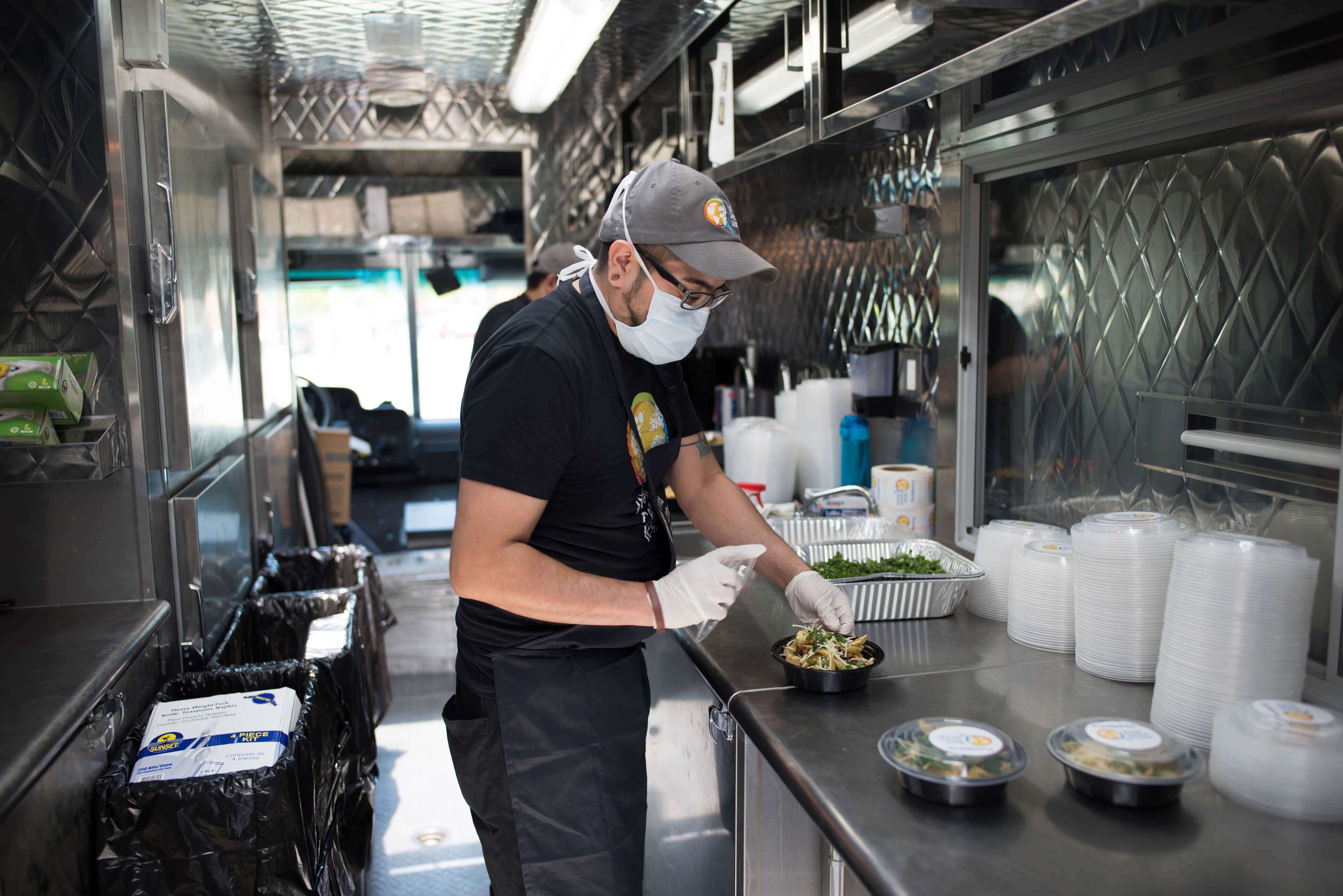 The Kings County hospital program in Brooklyn, which has served 5,500 meals per day since April 20th, is set up outside in a series of food trucks.  Meals are prepped in two trucks and distributed from two others. 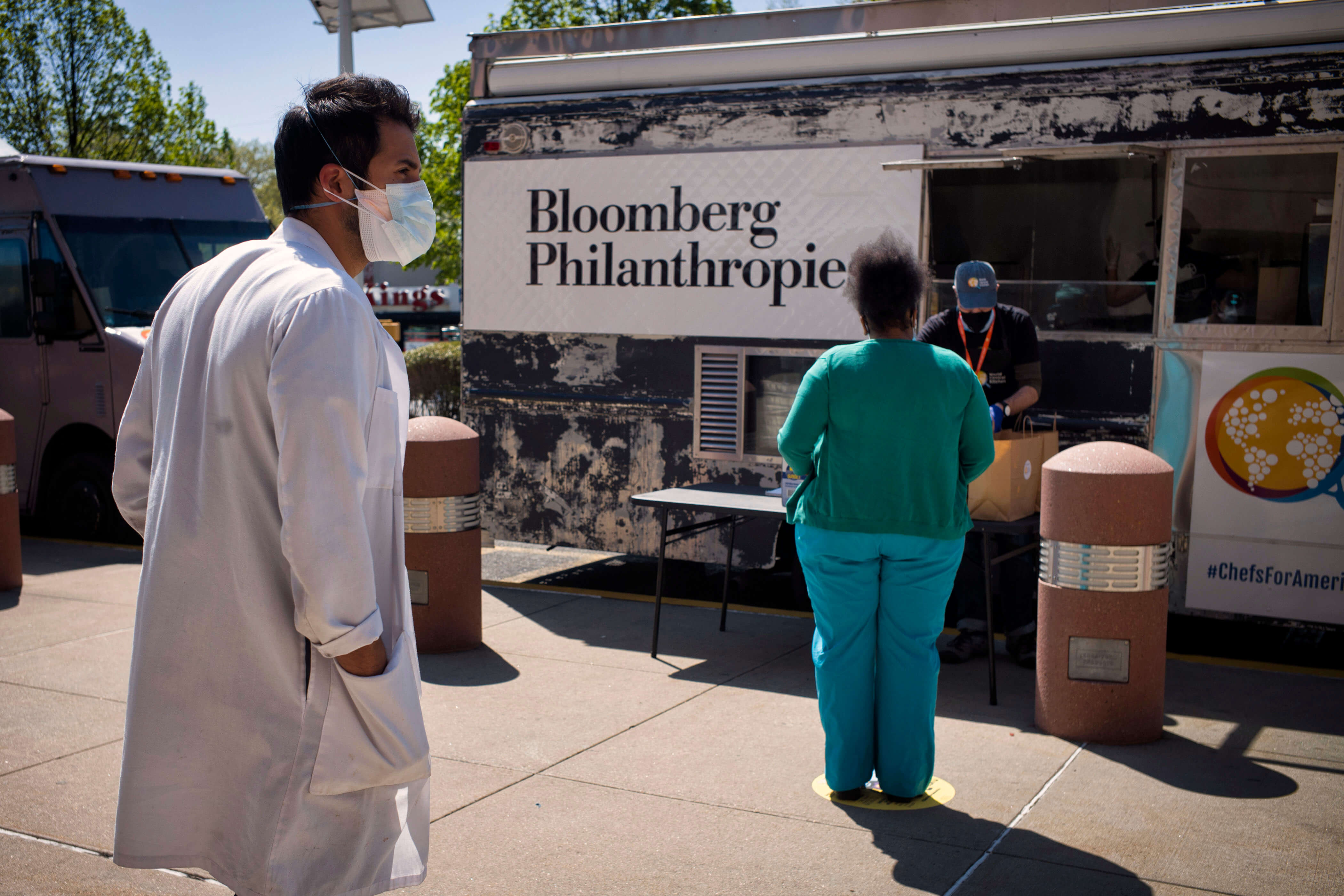 In the Queens NYC Health + Hospital, which has served 2,600 meals a day since April 24th, the meals are prepped in food trucks, but distributed in the hospital foyer. 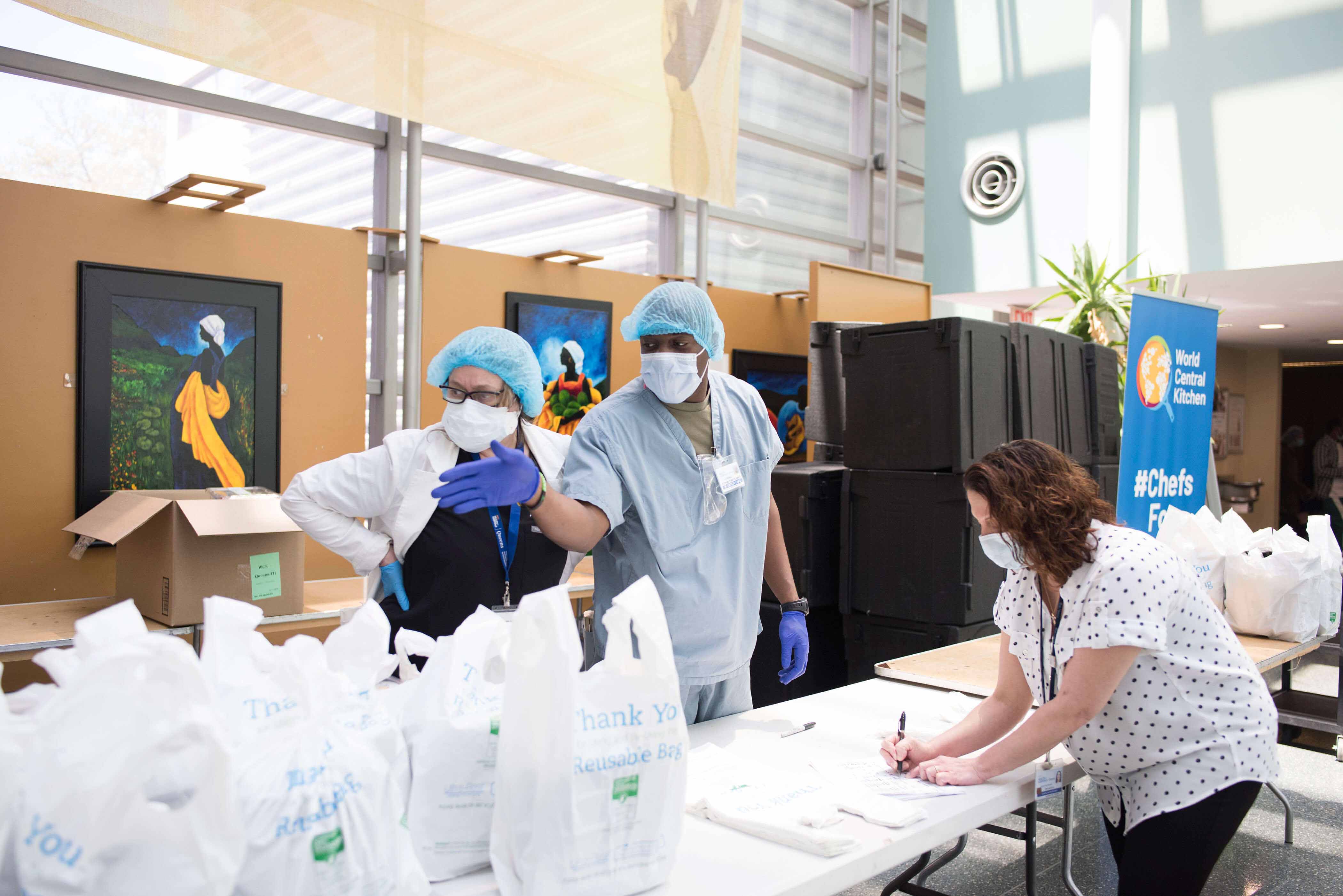 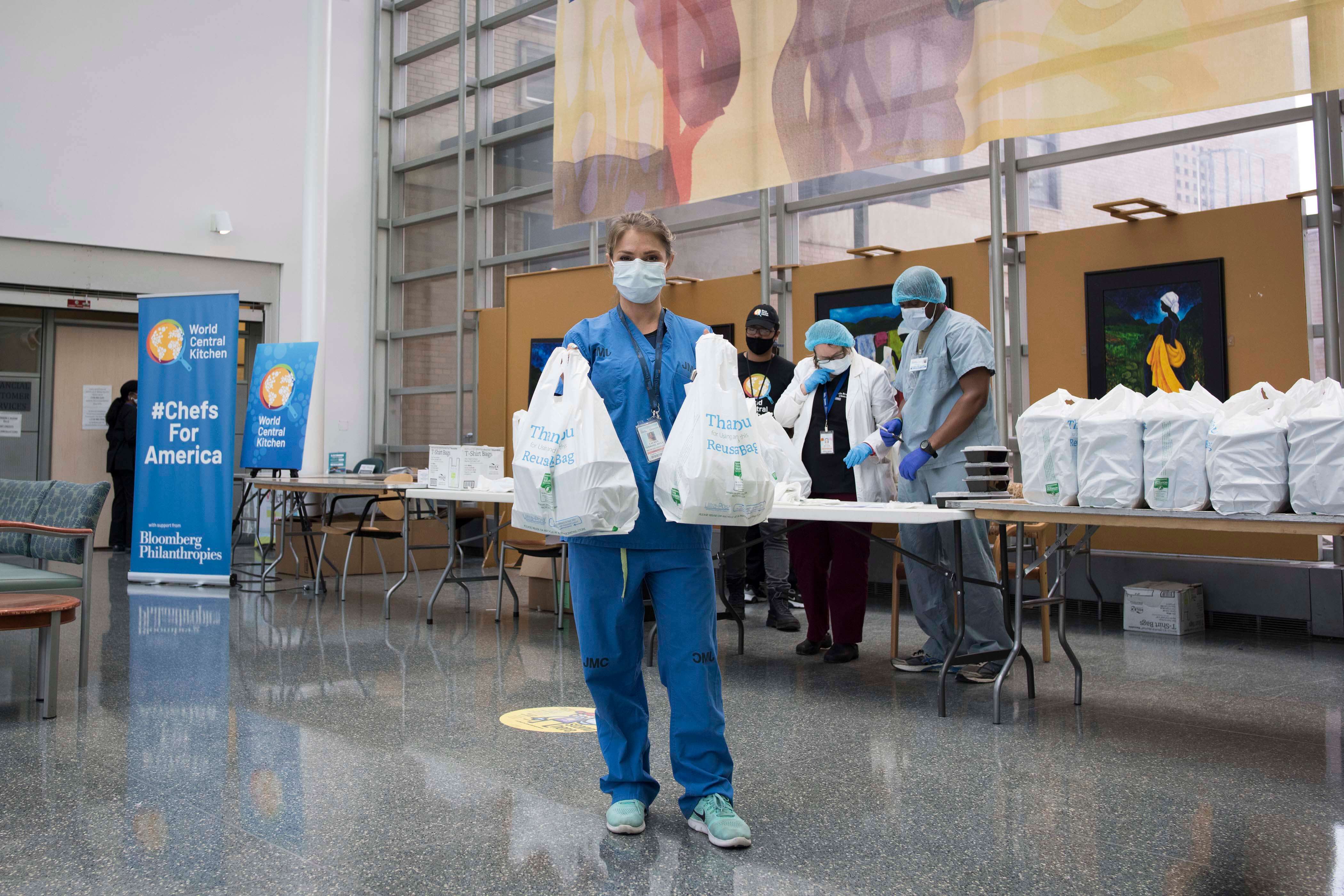 In the end, Chef Grace is right – it is about the little things.  The chefs and line cooks focus on every single detail – knowing that a flavorful, well-plated meal can be the difference between fuel and comfort.

The caring that goes into those decisions shows everywhere – from the sparks of color in the plating to the grin on the face of Andrew, a young man on loan from the US Military who checks for hospital workers’ names on the food distribution list in Queens.  Every ten minutes a nurse is not spending searching for a meal or waiting in line is ten minutes she can spend taking a break from caring for patients FaceTiming with her daughter.  These little things are not so little. 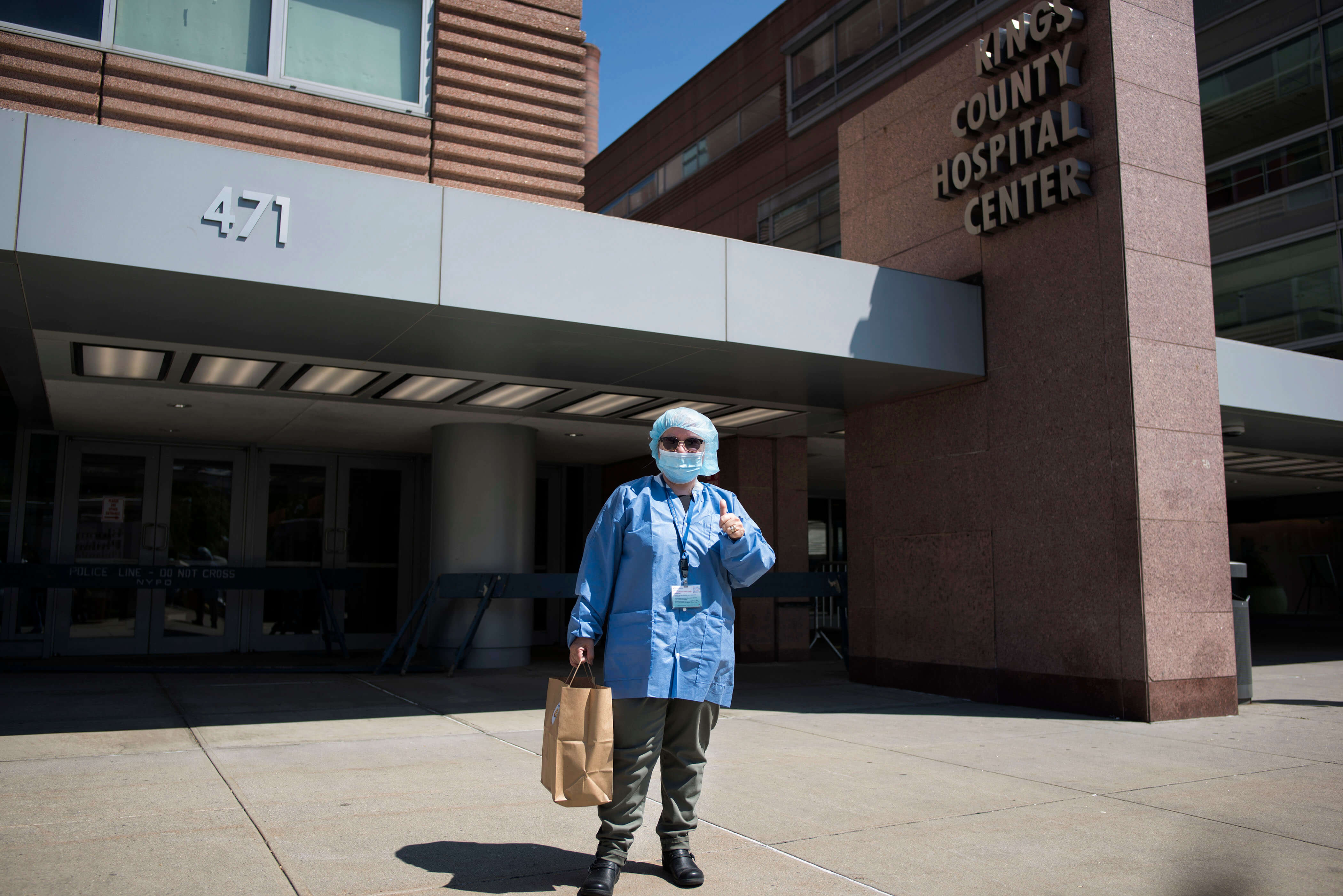 Watch a video with interviews from Bloomberg Philanthropies and World Central kitchen staff: