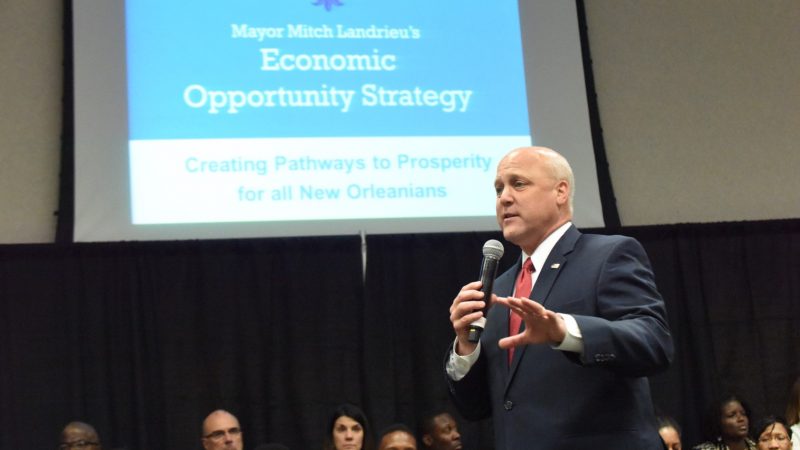 In the seven years since he took office, New Orleans Mayor Mitch Landrieu has proven the power of bold leadership, including an 18 percent drop in the murder rate, 16 percent decrease in unemployment among working-age African-American men, and numerous public-private partnerships that extended prosperity to new corners of the city. His city was also selected as one of five in the first cohort of the Bloomberg Philanthropies’ Innovation Teams program and is currently participating in What Works Cities. “At the end of the day, all [mayors] want the same thing: a bright future for our kids, safe neighborhoods, and economic opportunity. Yet the barrier to getting there can sometimes be difficult to understand or surmount,” Mayor Landrieu said. We spoke with the Mayor about those challenges, his advice for new mayors, and the importance of innovation.

How has your city’s focus on innovation helped New Orleans improve the lives of its residents?

In 2013, a report conducted by the Lindy Boggs National Center for Community Literacy at Loyola University New Orleans in partnership with The Data Center found that 52 percent of working-age African-American men in New Orleans were not employed. This statistic shocked the entire city into action. My directive to my team was simple: find a pathway to prosperity for these men, and help them achieve their greatest potential.

The next year, we launched the Network for Economic Opportunity, which is one of several initiatives fueled by Bloomberg Philanthropies’ Innovation Teams program. The Network’s aim is to connect all New Orleanians to the city’s economic growth through partnerships with local training providers, social service agencies, and community advocates. The Network also partners with the region’s largest employers, what we call anchor institutions, like the Louis Armstrong New Orleans International Airport, LSU Health and Sciences Center, Ochsner Health System, and the Sewerage and Water Board.

So our team got to work and we’re proud to report that by the fall of 2016, the number of working-age black men who were unemployed in New Orleans fell from 52 percent to 44 percent. This is an incredible benchmark of success, which proves that when we’re all pulling in the same direction, with everyone included and having a seat at the table, we win.

What principles have you learned in New Orleans that could be applied uniformly in any city?

Every city is different, but we do all face similar challenges: potholes, job creation, crime. At the end of the day, all of us want the same thing no matter where you live: a bright future for our kids, safe neighborhoods, and economic opportunity. Yet the barriers to getting there can sometimes be difficult to understand or surmount. As a leader, I have to be able to define and understand a problem with objective information before I can start to solve it. And I have to know if the solution I’ve developed is actually working. What Works Cities’ data framework can help cities address and evaluate their programs with discipline. Of course, local context matters. That may guide the measures by which we determine success or from which stakeholders we seek input. But without a solid evaluation framework, there’s no consistent way to know if we’re producing real results for our residents.

You’ve served as a mayor, state representative, and a lieutenant governor. What advice around government innovation do you offer other public servants?

My governing philosophy has always been to facilitate, link, and leverage. There are not many issues that government can solve alone. I often rely on my convening power as mayor to bring together individuals and organizations with different perspectives or representing different interests to tackle a problem. My goal is to facilitate new conversation that leads to action. I’m also hoping to link people together who may not realize that together they have the different pieces and parts needed to reach the solution. By sharing resources, we can all get there faster. And lastly, the importance of partnerships cannot be overstated. My team is always looking for opportunities to leverage the work that various organizations may be doing to reach a larger number of people or to add value to existing work.

And what would you say to a mayor who is new to government?

I’d again go back to the need to share. Progress doesn’t happen unless everyone is at the table – federal, state, and local government must be well aligned and working towards a common goal. The community must be represented in the solution with input and buy-in from non-profit organizations, faith-based leaders, and community groups. And philanthropic partners are critical to leveraging best practices and building scale.

Even now, seven years into my time as mayor, I am constantly asking for help and looking for input from my colleagues in other parts of the country. I’ve learned from [Louisville, Kentucky] Mayor Greg Fischer about the work they’ve done for summer youth employment and as he’s built several initiatives in performance improvement and innovation. And my team is also trying to offer up what we’ve learned wherever possible. I’ve shared with [Gary, Indiana] Mayor Karen Freeman-Wilson some of the successes and challenges we’ve faced in building NOLA For Life and our approach to comprehensive murder reduction.

Do you hope the relationship between Bloomberg Philanthropies and the City of New Orleans will endure after your successor takes office?

Yes, of course. Every mayor leaves office with an intended legacy. I hope that part of my legacy has been to bring new partnerships to the table in New Orleans and to use those partnerships to produce results for our residents. I certainly believe that our work with Bloomberg Philanthropies has done just that. As I head into the homestretch of my time as mayor of New Orleans, my team and I are being very thoughtful about how to ensure that some of the progress we’ve made and the work that we’ve accomplished endures. Our philanthropic partnerships can help to be a sustaining force in that. All I can say is thank you and let’s keep it going because there is more work to do.