The Power of Partnerships: Lessons Learned in Recovery and Rebuilding 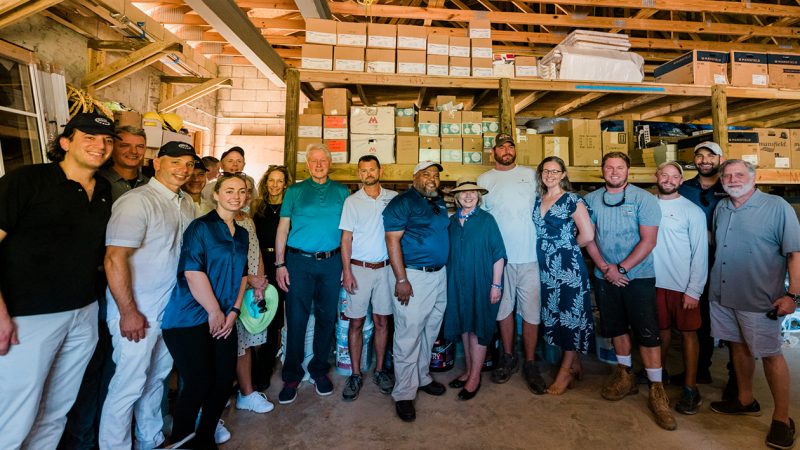 The report illustrates how successful recovery requires more than just money — it is about leveraging expertise, setting a bold vision, focusing on both immediate and longer-term needs, and working with strategic partners to ensure that resources are deployed quickly and wisely. Click here to view the full report.

Prior to the CGI meeting held in St. Thomas, Former President Bill Clinton and Former U.S. Secretary of State Hillary Rodham Clinton joined Bloomberg LP co-founder and leader of Bloomberg’s efforts in the territory, Tom Secunda, on a tour of St. John to learn more about hurricane recovery and rebuilding efforts led by the Bloomberg Response Team and local nonprofit Love City Strong. 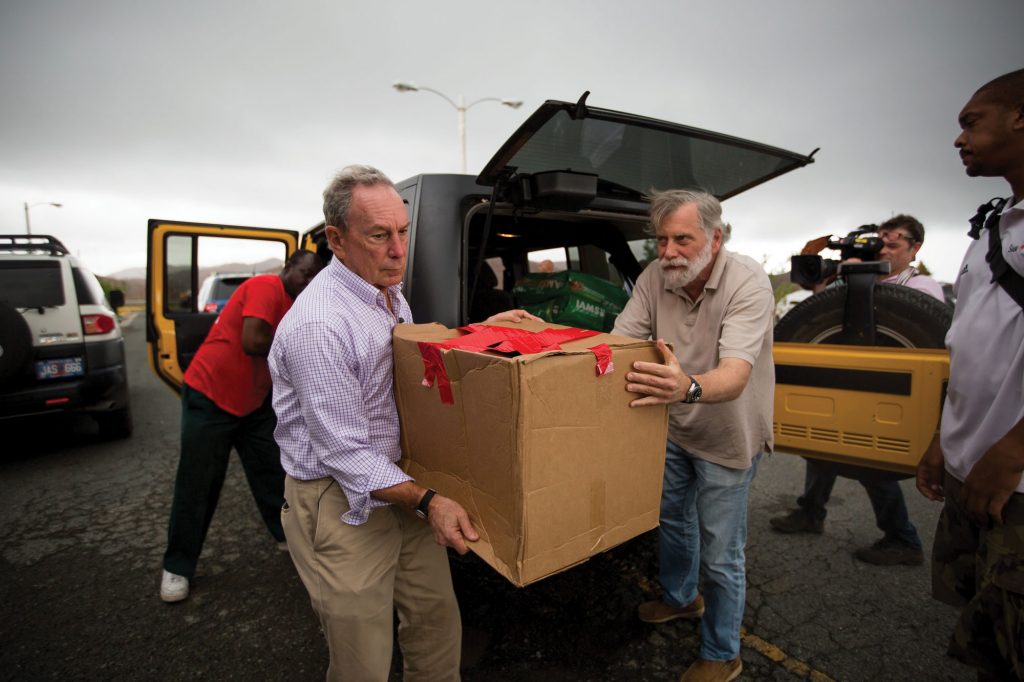 Mike Bloomberg and Tom Secunda arrived on the ground in the U.S. Virgin Islands just days after the first hurricane.

A major theme of CGI’s event was the value of cross-sector collaboration to drive effective policy, planning, and deployment of resources. In opening remarks of the meeting, Congresswoman Stacey Plaskett reiterated this theme by saying “public-private partnerships have the most transformative effect on [disaster] recovery.”—a sentiment echoed by many speakers that followed her.

When Hurricane Irma—the strongest storm on record in the Atlantic region—struck the Virgin Islands, followed by Hurricane Maria, in 2017, long-time St. John visitor and advocate Tom Secunda helped to mobilize philanthropic partners such as Kenny Chesney’s Love for Love City Foundation. Bloomberg Philanthropies worked with the USVI Governor’s Office to coordinate stakeholders in support of recovery efforts and within days of Irma, had staff in place to help manage medical supplies, debris removal, equipment and evacuations, and worked with service providers to reach vulnerable residents.

Many of the speakers at the CGI meeting shared how civil society, philanthropy and faith-based organizations came together in the immediate aftermath of the 2017 hurricanes to support residents on the devastated Caribbean islands.

“The private sector is nimble and often more in tune with constituent desires, while the public sector has the ability to commit long-term support and access to federal capital,” said Imani Daniel, Executive Director of the St. Thomas Long Term Recovery Team. “Without these key collaborations we see wasted resources, siloed projects, and missed opportunities to improve the systems meant to help vulnerable populations.”

Continuing to build trust and strengthen the connections between NGOs is essential to meet the challenges of any future disasters.

Recovery with a long-term lens

One of the challenges in disaster recovery is how to deploy quick and effective resources to the community, while maintaining focus on the longer-term needs and resiliency to better prepare for future disasters.

Following Irma and Maria, the Governor established the U.S. Virgin Islands Hurricane Recovery and Resilience Task Force, comprised of local and federal government representatives, businesses, community members, and national experts. While the recovery work continued at a rapid pace, the formation of the task force – and the community meetings it facilitated – provided a simultaneous forum to process information before locking in a long-term direction.

In September 2018, the Task Force issued a report to help guide rebuilding and resilience efforts and better prepare the Territory for the future.

“All the progress we’ve made is due to people coming together to share their time, expertise, and resources,” said Ian Samuel, Chairman of the St. John Long Term Recovery Team and local resident whose home was destroyed. “That spirit of collaboration continues to grow, and will help prepare our community to face whatever challenges the future may bring.”

Inspiring resilience on the frontlines of climate change

As climate change continues to alter the Virgin Islands, its weather conditions will become more intense, along with severe impacts.

Adam Freed, a principal at Bloomberg Associates, is supporting the Territory’s efforts to rebuild its energy infrastructure and accelerate its transition to renewables, including the creation of two hybrid “microgrids” on St. John.  Freed said, “Rather than rebuilding what existed before the storms, the USVI is focused on leapfrogging to a 21st Century energy system, with more renewables and distributed systems. This will lower costs for the utility, reduce rates for customers, and minimize the risk of a single point of failure bringing down the entire grid.” 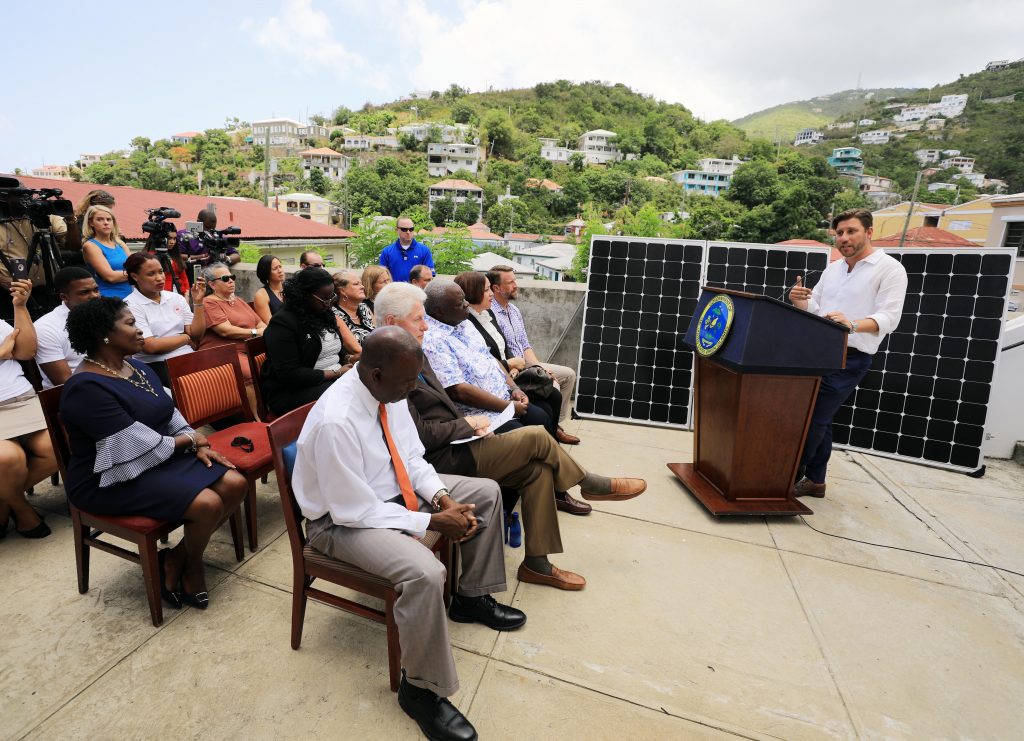 Adam Freed at a press conference in St. Thomas, USVI in August 2018 announcing a donation of solar panels to a children’s home and the launch of a program to create a new rate structure to incentivize more solar power.

Freed noted that the hybrid “microgrids” on St. John, which will include diesel generators, solar panels, and battery storage, will enable St. John to generate and store enough power to operate independently in the event of a future storm. In the aftermath of Irma and Maria, parts of the island were without power for more than 100 days. This project will serve as a global model for energy sustainability and resilience.

During a CGI meeting panel he moderated, Freed highlighted that solutions like these require the active engagement of all sectors. “You need a strategic vision and plan from the public sector, relationships with NGOs and impacted stakeholders, the ability to leverage knowledge and expertise from private companies, and leadership in each sector to make change happen.”

As the Bloomberg report highlights, by bringing together local government, Federal agencies, the private sector, and philanthropy, the USVI’s recovery to date has been faster than many other Caribbean islands. The CGI meeting provided an opportunity for leaders to share lessons and effective strategies on resilience and reinforced the message that through strategic collaboration, we can more effectively respond to and mitigate natural disasters.

“If the storm clouds had a silver lining, it was how Irma and Maria brought existing challenges to light – challenges that, if we work together, we can fix,” said Tom Secunda. “They showed us where we need to be better prepared and supplied; how we can better serve people in an emergency; and how we can improve cooperation across government, business and philanthropy.” 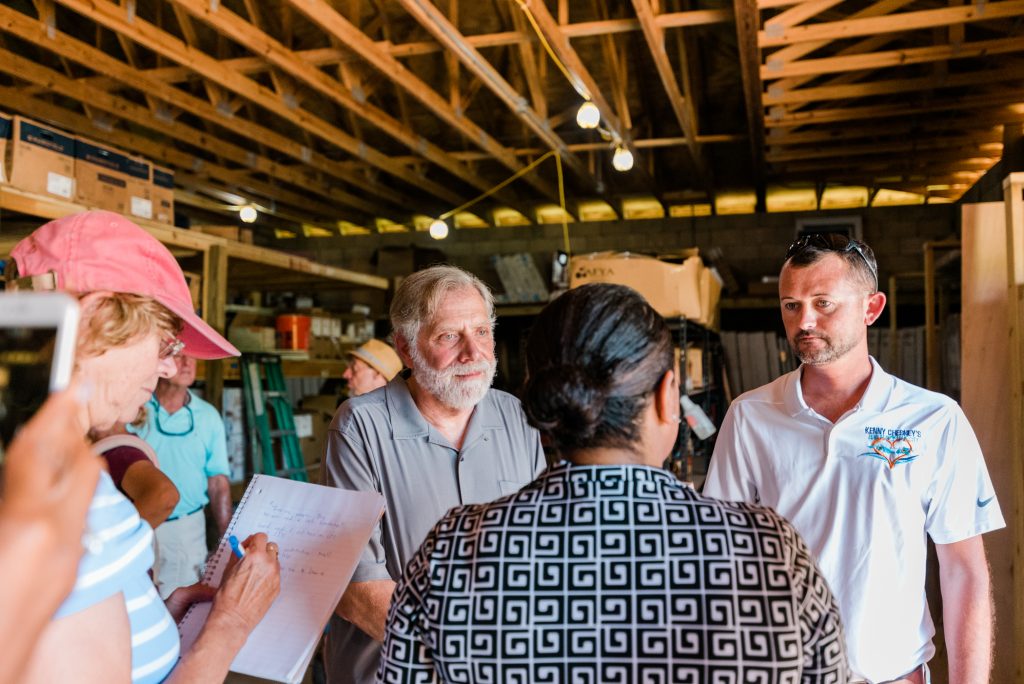 Secunda reaffirmed Bloomberg’s commitment to sharing what it has learned along the way, promoting great ideas and finding new ways to collaborate adding, “Bloomberg’s investments in the USVI led to new and innovative approaches to disaster recovery and we want to share what was learned to help drive preparedness across the region and in other parts of the world.”