Many years ago I visited Ligui, a small town on the east coast of Baja California, Mexico.  We were engaging the local fishing community with our time-tested approach to making change.  It included equal parts community engagement, social marketing, capacity building, and the provision of technical assistance which, in this case, ensured the fishing cooperatives could achieve legal status and begin to manage their fisheries sustainably.

In most of our programs, the local community creates a mascot that represents a significant regional species, behind which the community rallies to inspire new, more sustainable behaviors towards natural resource management.

In this particular community the mascot chosen was the chocolate clam – the almejita – not because it was particularly threatened, but because it was the cultural and culinary representation of the community.  This jovial clam danced with children while the campaign went into full swing: puppet shows, songs, pledges by government officials, and a parade crowded the beach.

However, what caught my eye, just behind the audience of a puppet show dramatizing an infraction in the marine reserve, was a table on the beach set up by a group of women, whose spouses were part of the fishing cooperative.  On this table, the women were selling soup made out of chocolate clams.

Whereas women used to earn just 1 peso per raw clam (about a US nickel at today’s exchange rates) when brought directly from the sea and sold to middlemen, this group of enterprising women was able to earn six times that amount by adding a little value to their catch – in this case packaging the clams in a kind of soup that the locals enjoyed immensely.  (And, despite my reservations in sampling a cream-based soup that had been sitting in the scorching hot sun for four hours, it was delicious.) 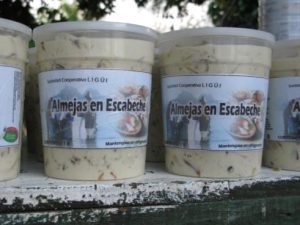 This small, community-based enterprise made local fishers enough money that they could afford to take on the challenges that Rare’s intervention was encouraging them to address, namely putting in place resource management regulations (such as size and catch limits, gear restrictions, etc.) to enable better fishing yields and long-term habitat conservation to ultimately benefit their livelihoods, food security, and resilience to climate change.

Some years later, Rare, Oceana and Encourage Capital joined forces in Bloomberg Philanthropies’ Vibrant Oceans Initiative (VOI), with the latter organization focused on designing blueprints to invest in enterprises addressing fisheries recovery.  Working closely together, Rare and Encourage explored opportunities to support businesses at a much larger scale than that demonstrated in Ligui, Mexico, but having the same objective – financing the transition of fisheries to sustainability.

Within the VOI, Rare’s work centers around coastal (or near-shore) fisheries which, in the case of the Philippines, provide more than 50% of the national fish catch and more than 90% of the jobs in the sector, while also comprising the vast majority of critical oceanic biodiversity (such as coral reefs and mangroves).  Worldwide, over a billion people depend on these coastal fisheries for the majority of their protein.

In our work in the Philippines, we leverage our behavior change expertise to help dozens of coastal communities transition from a largely open-access fishing regime to one of solid management regulations, governance, and enforcement.  However, the question of financial incentives needed to afford the transition still loomed large.

Our response to that challenge, at least in part, led to the creation of the Meloy Fund, which was announced at the Our Ocean conference this week.  The Meloy Fund is the first impact investment vehicle wholly focused on supporting sustainable coastal fisheries in the developing tropics.  The Meloy Fund will invest at least $20 million in fishing-related enterprises in the Philippines and Indonesia, which will lead to value creation opportunities for small scale fishermen, as in our Ligui example. The Fund will allow them to make forward-looking decisions to reduce their fishing effort in the short term while still achieving a reasonable rate of return for investors.

Importantly, the Meloy Fund works hand-in-hand with the VOI and Rare’s on-the-ground work to achieve impact – fisheries are a common-pool resource and cannot be effectively influenced without both governance and economic incentives in place.  If  successful, the Meloy Fund will not only improve incomes for more than 10,000 local fishermen and their families, but also protect over a million hectares of some of the world’s most important marine biodiversity, reduce carbon emissions, and enhance food security for a climate vulnerable population (combined, the two countries are comprised of roughly 25,000 islands).

In a more macro sense, we hope to demonstrate the value of coastal fisheries – which we estimate can generate an additional $4 billion under sustainable management in our two target countries – and crowd in other investors, both public and private, who will recognize the urgent opportunity to support a sector and industry with a wide array of benefits to people and nature.  The Meloy Fund is just the start of the de-risking process, but early signs are promising.  The investment opportunities are there to be unearthed, and investors, such as the Global Environment Facility (GEF) and the Grantham Environmental Trust, are all participating in the creation of the fund.  Getting this right will not be an easy lift, but after a taste of Almejas en Escabeche, we know it will be worth the effort.