Can art make streets safer? As part of our Asphalt Art Initiative, a new study found that city streets became considerably safer for pedestrians after incorporating art into roadway redesigns.

When people think about transportation infrastructure, many think of streets and sidewalks that are drab, forgettable stretches of asphalt and concrete that get you where you need to go, but certainly are not destinations in their own right.

Our Asphalt Art Initiative was designed to shift this perspective, using color and creativity to breathe new life into city streets. “Asphalt art” can take many forms – from intersection murals and crosswalk art to painted plazas, or bridge underpasses – and is often an effective and low-cost strategy to create safer and more welcoming streets and public spaces. These projects can also improve safety by increasing visibility of pedestrian spaces and crosswalks, promoting a more walkable public realm, and encouraging drivers to slow down and be more alert for pedestrians and cyclists, the most vulnerable users of the road. 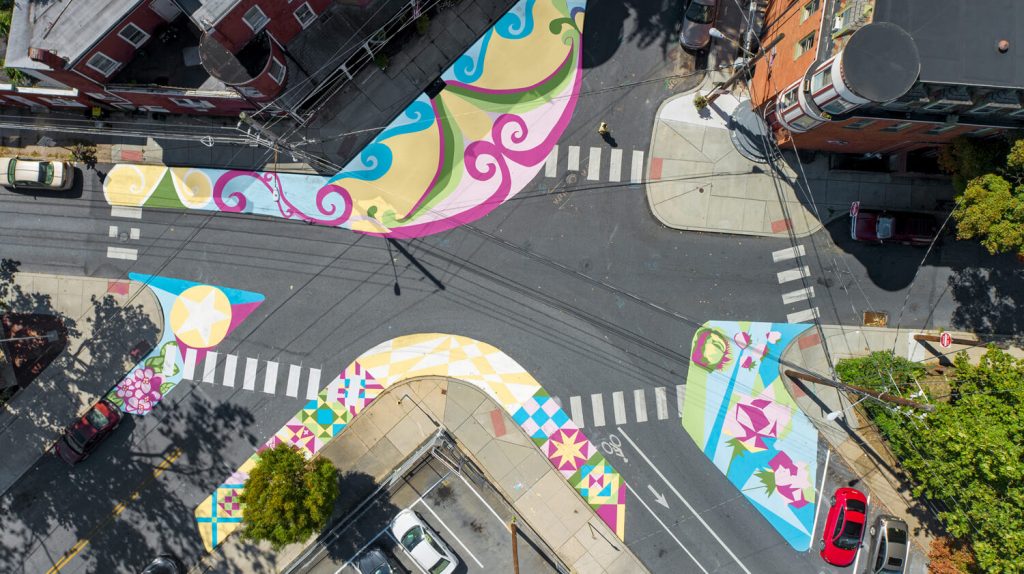 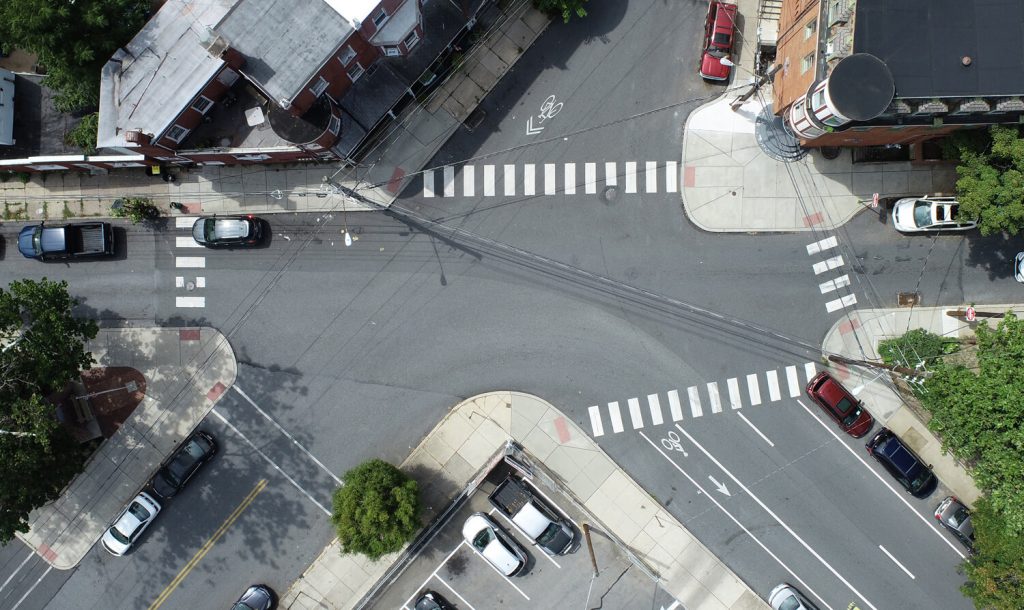 But despite broad support, arts-driven transportation projects have faced speed bumps, including regulatory hurdles in the United States and elsewhere, in part because there has been little published literature on the safety performance of asphalt art sites.

The new Asphalt Art Safety Study, produced by Sam Schwartz Consulting in partnership with Bloomberg Philanthropies, examined the impact of art in the streetscape by comparing historical crash rates and real-time behavior of motorists and pedestrians at an array of asphalt art sites before and after the projects were installed.

The first part of the study analyzed crash history at 17 asphalt art sites across the country that have been in place for at least two years and found a dramatic reduction in motor vehicle crash rates after the projects were installed, including a 50% drop in crashes involving pedestrians or cyclists and a 37% drop in crashes leading to injuries. The second part of the study looked at real-time driver and pedestrian behavior using video footage of 5 recent installations that were part of our Asphalt Art Initiative and found a 27% increase in the rate of drivers yielding to pedestrians with the right-of-way as well as a 25% drop in potentially dangerous conflicts between drivers and pedestrians.

There is arguably no more important goal for the transportation profession than ensuring safe travel for everyone – especially vulnerable road users. The encouraging findings of this study are particularly notable in light of the upward trend in pedestrian fatalities, which increased in the U.S. by an unprecedented 21% during the pandemic. The study also comes at a moment when the U.S. federal traffic safety guidance that shapes every roadway in the country – from interstates to local main streets – is being updated for the first time in a decade, and this evidence shows that arts-driven redesigns can make our streets safer for everyone.

With this analysis of nearly two dozen sites across the country, decision-makers now have the evidence to show that projects like these can reduce crashes and improve safety for everyone on the road. With the data needed to make the case, we hope to give the green light to communities that are looking to use asphalt art projects to create safer, more walkable, and more welcoming streets across the country and around the world.

European Cities: Apply for a Grant

Bloomberg Philanthropies recently announced an expansion of its Asphalt Art Initiative in Europe and opened applications for Asphalt Art Initiative grants which will provide as many as 20 cities with $25,000 for projects that use art and design to improve street safety, revitalize public spaces, and engage community residents. Interested cities can apply here.