Why We Need to Raise Tobacco Taxes

For a long time, the tobacco industry has fiercely opposed levies on tobacco products and launched intense campaigns against efforts to raise tobacco taxes, making the fight to curb tobacco use challenging. The reality is that raising taxes on tobacco products is the most effective way to reduce tobacco use, generate revenue for health programs and most importantly, save lives.  That’s why the World Health Organization (WHO) is putting tobacco taxes back on the agenda for World No Tobacco Day 2014. 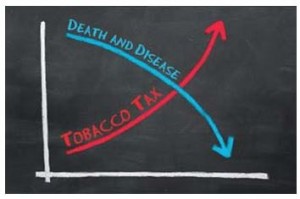 According to WHO estimates, if all countries increased tobacco excise taxes by 50% per pack this would result in 49 million fewer smokers and 11 million lives saved. Plus, governments around the world would earn an extra $101 billion that they could put towards health and social programs.

Raising taxes on tobacco and making tobacco products more expensive is particularly effective in reducing tobacco use in developing countries, where people often do not get adequate treatment if they fall sick from illnesses associated with tobacco use like cancer.

WHO collects and analyzes data of tax prices around the world and tracks best practices. It advises governments on how best to strengthen their tax systems and raise tax rates. We know that some countries are already benefitting from increased tobacco taxes.  Turkey, for example, has steadily increased excise taxes since 2008. Within the following four years, tobacco sales had fallen by 12%. In 2008, 22 countries had tax rates sufficiently high enough to impact consumption. In 2012, that had increased to 32 countries.

World No Tobacco Day 2014 aims to encourage governments to increase tobacco taxes and to simplify the concept of tobacco taxation so more people understand the issue better. WHO also plans to host a virtual meeting on tobacco tax on May 28th, to broaden the discussion through online interaction. More information is available at https://www.who.int/health-topics/tobacco.

We look forward to celebrating World No Tobacco Day with you all on May 31st. Your support for tobacco tax increases where you live can make a real difference, as higher tobacco taxes not only help tobacco users cut down or quit, but also help prevent young people from starting.