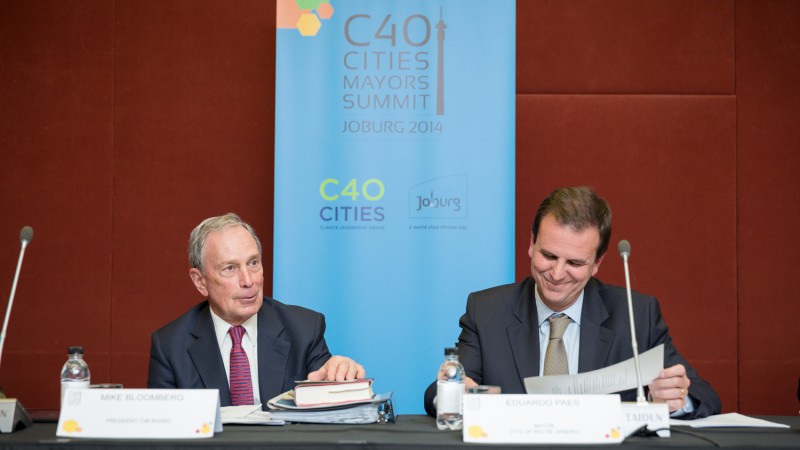 This year begins a new stage for Bloomberg Philanthropies – and for me personally. Over the past twenty years, I have grown increasingly active in philanthropy – and increasingly convinced of its power to save lives and change the world for the better. When I left City Hall on December 31, 2013, after having had the honor of serving New Yorkers for 12 years, I began having more time to spend on national and global issues. The same is true for Patti Harris, who served as my First Deputy Mayor and is also CEO of Bloomberg Philanthropies. Now, both of us are excited by the opportunity to substantially expand the work of Bloomberg Philanthropies and our involvement in it.

Thanks to the hard work of our dedicated staff and our diverse and driven partners, Bloomberg Philanthropies has already established itself as a force for policy innovation and global collaboration. In fact, this month we were named the world’s second most innovative organization, behind only Google, by Fast Company. That honor is a reflection of groundbreaking work that is happening in each of our different program areas.

For instance, last year our Government Innovation program helped the mayors of Providence and Houston plan promising new efforts in recycling and early childhood education – ideas that, if successful, can be adapted and employed in other cities around the world. We helped bring Financial Empowerment Centers – first piloted in New York City – to another five U.S. cities, where they are already helping thousands of Americans reduce their debt and save for the future. In our work to improve education, we funded a new assessment for U.S. high schools to measure their performance against students in 64 other countries, helping school leaders identify how students need to improve in today’s competitive global environment. We also scaled up our support of cutting-edge digital projects at arts and cultural institutions, helping increase access to the arts through technology.

Internationally, we funded comprehensive tobacco control efforts in Russia, Bangladesh and the Philippines that collectively protect nearly 400 million people from the dangers of tobacco. They join a total of 1.5 billion people in 40 countries who are now covered by proven tobacco control measures that we’ve supported. We funded public awareness campaigns to support obesity prevention measures in Mexico, which has the highest obesity rate among the world’s most populous nations. Our efforts helped Mexico’s President introduce a new tax on junk foods and sugar-sweetened beverages that was officially passed into law last fall. In Tanzania, we expanded our maternal health work to provide family planning services to more than two million women – part of a global family planning effort that will reach nearly 120 million women in the world’s poorest countries by the year 2020. In addition, our support of road safety advocates in Brazil, India, Mexico and Turkey helped launch sustainable urban transport projects that will save a projected 1,000 lives each year, while also cutting air pollution.

Our road safety work is just one example of how the connection between public health and the environment – too often treated as separate issues – could not be stronger. Cleaner air improves our prospects in the long-term battle against climate change, but it also means less disease and suffering and longer lives for people living today. Both are matters of life and death. That’s why we are more committed than ever to expanding our environmental work. Our efforts to reduce U.S. coal pollution through a partnership with the Sierra Club are bearing real fruit. Last year, we passed the halfway mark toward our goal of retiring one-third of the country’s coal fleet, our dirtiest energy source. The U.S. now leads the rest of the world in reducing carbon emissions, and the single biggest factor contributing to this reduction has been the decline in coal power.

Another way we are working to reduce carbon emissions is through our support of the C40 Cities Climate Leadership Group – a network of 66 of the world’s largest cities that are confronting climate change head-on, with real, measurable actions that reduce their carbon footprints. With the help of C40, cities around the world have been able to share effective ideas, invest in sustainability, and make a substantial impact on the fight against climate change. In the year ahead, I look forward to building on this work through my new roles as President of the C40 Board of Directors and Special Envoy to the United Nations for Cities and Climate Change.

This year our environmental work will also expand into an entirely new area: marine life, which is facing serious threats from the world’s growing population.

One billion people worldwide depend on fish as their primary source of protein – and the global demand for fish is projected to increase by at least another 20 percent by the year 2030. Steadily increasing demand for fish, paired with a lack of supply management, means that today, far more fish are being caught than can be naturally replaced. This presents a major threat not only to fish species, but also to the billions of people who rely on fish for food and income. If fish become scarce, the impact on humanity – and the growth in hunger and starvation – could be catastrophic.

That’s why Bloomberg Philanthropies is launching a new initiative that will protect the supply of fish in our oceans. We are committing $53 million – making us one of the top five funders of ocean preservation worldwide – to reform fishing practices and keep our oceans thriving. Our approach will, for the first time, reform both local and industrial fishing practices and help leverage private capital to produce a transition to more sustainable fishing. We will begin this work in Brazil, Chile, and the Philippines, which together account for 7 percent of the fish caught worldwide.

Our new oceans program is an example of how Bloomberg Philanthropies targets preventable problems and implements solutions that have the potential to be replicated across the world. We insist on using data to guide our work and ensure that we’re delivering results. We don’t shy away from controversy if we can make a difference. We search for strong partner organizations, both public and private, that help enhance our impact. We look to the power of cities to catalyze and spread change, especially when national governments are slow to act. And we work to multiply the power of philanthropy by helping local communities advocate for themselves and create change that lasts.

As the world’s population continues to grow, so will the scale of our challenges. Bloomberg Philanthropies is fully committed to tackling those challenges head-on. And as I dive more deeply into this work than ever before, I could not be more hopeful about the opportunities for change that exist. Let’s have the courage and foresight to seize them.

View Bloomberg Philanthropies’ full Annual Update to get an in-depth look at our efforts and impact in 2013.