Mayors Meeting the Challenge: A Visit to Philly

One year ago, Bloomberg Philanthropies launched the American Cities Initiative, our umbrella initiative that includes all of our work in U.S. cities. Since then, we’ve made several major investments aimed at helping cities tackle their most pressing issues. We’ve doubled down on helping cities build their capacity to use data and evidence to save money, be more efficient and ultimately improve quality of life for citizens (who doesn’t like their potholes filled more quickly?). We’ve expanded a program that provides training to small and mid-sized cultural organizations in more than a dozen cities to help them think more like small businesses. And, most recently, we launched a $70-million competition to help 20 cities reduce greenhouse gas emissions as part of our larger effort to ensure the U.S. meets its commitments under the Paris Climate Agreement, despite backpedaling in Washington.

Another of these investments, the Mayors Challenge, demonstrates the depth and breadth of the ways we work with cities. More than 320 cities put forward innovative ideas for solving problems in their communities. We chose 35 of them—with creative approaches to everything from fighting the opioid epidemic to ending homelessness—as Champion Cities. Each received $100,000 and coaching from top designers in how to build prototypes of their ideas and then test out those models to improve them. In October, four of them will receive $1 million and one will get $5 million to implement their ideas.

Recently, I had the privilege of seeing one of those cities in action. Philadelphia is working on a long overdue change to the way young people encounter the criminal justice system. Along with Caroline Kennedy, co-chair of the Mayors Challenge selection committee, I watched as Philadelphia leaders tested out their breakthrough idea and improved it on the spot with input from teenagers.

When children are arrested in Philadelphia, even for low-level offenses like shoplifting or skipping school, their entry point into the justice system is pretty similar to what it is for adults. A police officer brings them to the nearest police station, where they are put in a concrete cell along with adults to await booking. The hours tick by with minimal communication about what to expect.

Philadelphia is testing an entirely new approach, which aims to make this intake process less traumatic for the 4,000 youths arrested every year. The idea is to create a place for children to go that isn’t a police precinct. Instead, a social worker will immediately assess their situation, plugging many of them into social services rather than the juvenile justice system. The children will sit on a couch in a bright waiting room. And they’ll be released directly to their parents or guardians—rather than returned to the street, as often happens now.

The prototyping event was unlike anything I’ve ever seen. Organizers turned a room in the Philadelphia Convention Center into a full-size mockup of what the Juvenile Justice Hub could look like, complete with colorful walls adorned with paintings, comfortable furniture, and plants. Actors then role-played their way through key moments that will take place at the Hub: the child’s intake experience, the meeting with a social worker, and the handoff back to a parent. 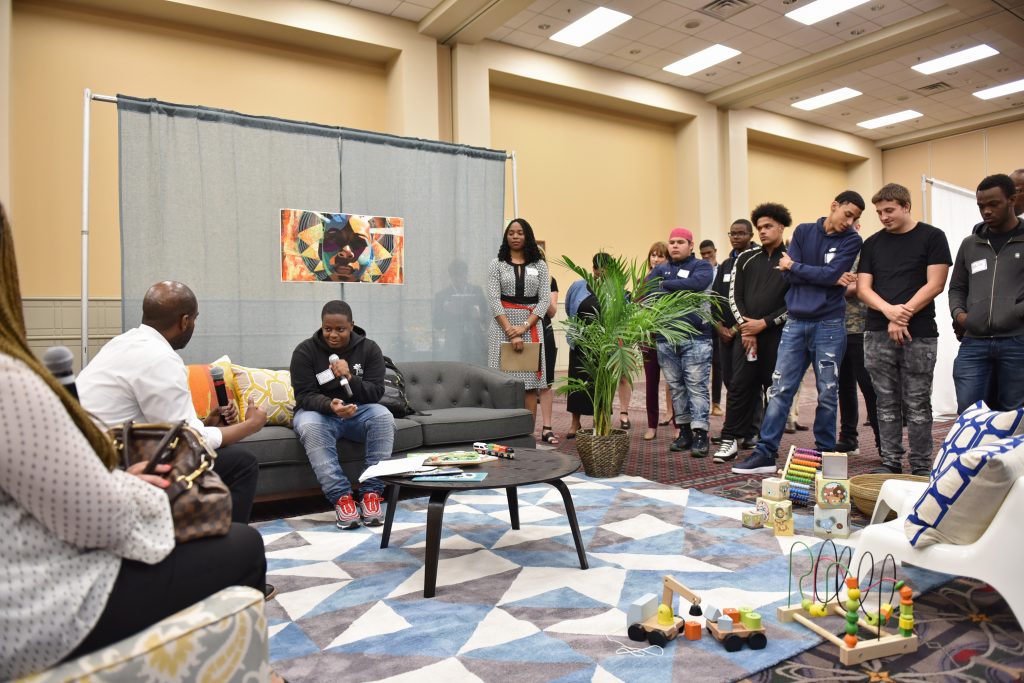 Teenagers, police officers, and social workers role-played interactions that would take place at Philadelphia’s Juvenile Justice Hub. The proposed facility is intended to provide a less traumatic experience for the 4,000 youths arrested in the city each year, who currently encounter a similar system as adults.

The “actors” were people with real-world experience. Actual police officers and social workers role played along with teenagers. About 20 additional teenagers watched and offered their feedback after each scene. Their insights were incorporated into subsequent rounds of play acting, allowing organizers to fine-tune the Hub’s processes and procedures even as they were developing them.

Three things about my visit to Philadelphia really stood out. First, when government works with the people it serves to create a program, it results in more than just good policies. It also produces a sense of empowerment. The participating teenagers’ faces positively lit up when they heard that the Hub’s design would take their feedback into account. As one of them said, “You’re treating us like people.”

Second is that there’s great value in developing a program the way Philadelphia is doing it—through an iterative, adaptive, and fluid process. Too often, government programs are designed without engaging users until it’s too late. By contrast, Philadelphia’s prototyping produced immediate feedback, which allowed for real-time improvements.

Finally, what’s happening in Philadelphia is another example of how important mayoral leadership is to encouraging innovation in local government. Mayor Jim Kenney has made criminal justice reform and reducing discrimination against African-American men top priorities for his administration. When a mayor sets a bold and clear vision like this, it gives everyone—from department heads to front-line staff—the incentive to think creatively and the political cover to take chances. It’s no mistake that the idea for the Juvenile Justice Hub came from two police officers, who saw what was happening to children they arrested. They recognized that there had to be a better way.

And this is what’s happening in just one city. Right now, through the Mayors Challenge, 34 more cities are testing out their ideas, seeing what works, refining their plans, and making better public policy. I can’t wait to see what their revised proposals look like when they submit them later this August.