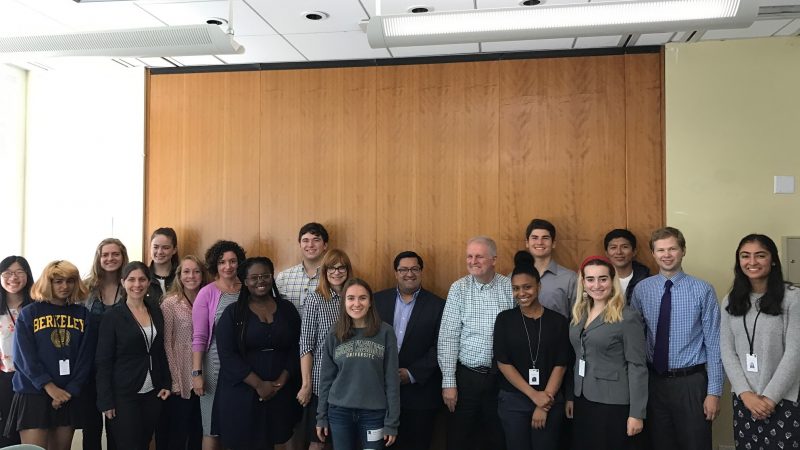 Berkeley, CA. Mayor Jesse Arreguin and members of his team are among the more than 3,000 public servants who will get in-person support as part of the 2017 Mayors Challenge.

2,000 hours of skills-building workshops, delivered to more than 3,000 municipal leaders in 300 cities across 45 states. All in eight short summer weeks.

Welcome to the first phase of the 2017 Mayors Challenge, Bloomberg Philanthropies’ flagship effort to encourage cities to generate bold responses to the urgent challenges they face.

Starting this week, Bloomberg Philanthropies and its network of innovation experts are crisscrossing the country to work with city leaders and their teams. The plan? Provide guidance on developing a bold idea for the Mayors Challenge, while also giving municipal officials cutting-edge tools to identify and tackle daunting challenges – so they can invest in innovation long after the Mayors Challenge ends.

As I’ve said before, cities are a powerful, though largely untapped, distribution network for ideas that work. The Mayors Challenge is designed to harness and strengthen that network because it focuses on helping cities develop ideas that can spread. And these daylong workshops are a powerful way to jumpstart that process. They will deliver the latest thinking on how to gain a deep understanding of whatever problem the city wants to address, harness insights from the people who experience that issue first-hand, and engage stakeholders in the idea creation process from start to finish.

These concepts are powerful, which is why successful businesses increasingly rely on them to generate new solutions and open new markets. The good news is that a growing number of the most creative local governments are using them, too. They’ve been used in Mobile, Alabama to tackle blight; Peoria, Illinois to promote climate resilience; and Anchorage, Alaska to address the homelessness crisis– to highlight just a few.

We’re excited to help them spread further. If we’ve learned anything over the past few months, it’s that local leaders can’t wait to begin making innovation and partnership a priority. The challenges are just too great. The encouraging news is that more and more cities are stepping up to meet them.

Just think about how mayors have led on climate. Earlier this summer when the U.S. federal government announced it was withdrawing from the Paris Climate Agreement, mayors across the country organized and got each other invested. And then, collectively, they pushed other levels of government around the world to reach higher. Mike Bloomberg argues that cities and businesses can ensure America meets its commitment to the Agreement, even if they get no help from the federal government. That’s stunning.

And it’s just the beginning. From the growing opioid crisis to America’s widening inequality gap, it is our city leaders most of all who will need to ask the right questions, gather the best data, and summon the bold vision needed to move their residents – and ultimately all of us – forward.

This year, we’ve designed the Mayors Challenge specifically to help cities develop solutions more quickly. We’ll also be learning from city leaders as they share what they hear from their residents, reveal what inspires new ideas, and tell us what makes them optimistic about finding local solutions.

For the next eight weeks, you can follow the conversation at #MayorsChallenge. I hope you’ll come with us on this journey.