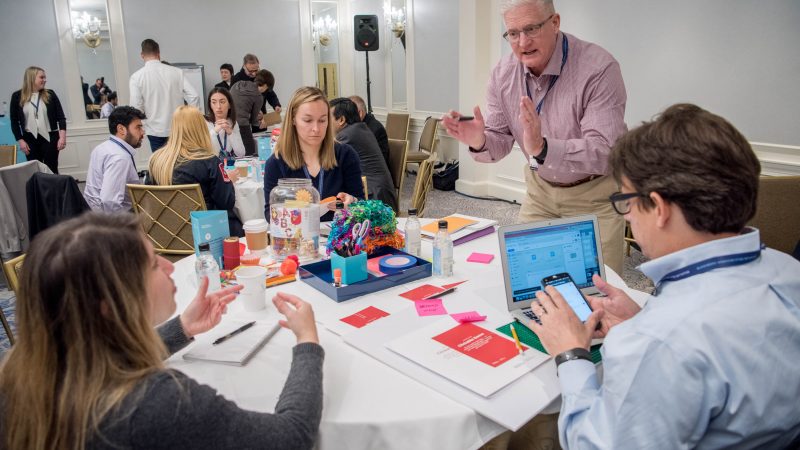 This week, teams from 35 city halls across the United States are getting a crash course in how to take a good idea and test, learn, and adapt to make it better.

They’re the Champion Cities — finalists in the 2018 Mayors Challenge to find bold ideas for solving cities’ toughest problems, including everything from climate change and homelessness, to public health and infrastructure. We awarded each of them up to $100,000 to develop their ideas over a six-month testing phase. One city will win a grand prize of $5 million in October, while four others will win $1 million.

The city teams are in New York City this week for a series of sessions called Ideas Camp. Working in small groups, they’ll get expert coaching on identifying testable assumptions and guidance on how to engage stakeholders to asses an idea’s viability in real-life situations. The coaches come from a range of backgrounds, with expertise in designing innovative services and strategies in both the public and private sectors. They’ll advise as the city teams build and test prototypes of their solutions, plan citizen engagement strategies, and develop metrics for how they’ll measure success.

Ahead of Ideas Camp, the coaches shared some insights about innovation. Here’s what they said.

What do you consider the most exciting public-sector innovation over the past 10 years — and why?

Erik Olesund (@olesund), co-founder, Collective Capital: The re:form project led by the design firm Civilla in partnership with the Michigan Department of Health and Human Services. They are humanizing and simplifying the experience of applying for public benefits, thereby saving time and effort for those who most need it. The redesign of the form didn’t take long, but it was a multi-year process to get it to comply with regulations and then to get it implemented. So much of public interaction is through a form of some kind, and project re:form is a great example of how much you can do by simply changing that form.

Mayo Nissen (@mayonissen), associate designer director, frog design: gov.uk, because it created a model for modern, digital public-sector innovation at scale — both as modern outcome/user experience but also as proof that modern, agile, human-centered processes could work in the midst of a huge public-sector organization. The ripple effects far beyond the U.K. have been huge because they’ve been open and have liberally shared their methods and approaches.

Laura Hyde Page, project lead, Jump Associates: I’m pretty excited about the open-data initiatives I see a lot of cities participating in. While cities often have access to some incredible data, they don’t always have the resources to process it in a meaningful way. When cities share data and insights, they are able to come up with more robust solutions to some of the world’s most complex issues.

Ryann Hoffman, independent design consultant: Every time I hear of an amazing public-sector innovation, I get most excited pondering the behind-the-scenes measures that made it possible. This is the game-changing work largely absent from sexy articles about innovation projects — overhauling procurement processes to allow for more rapid user-engagement, redesigning funding structures so emergent design processes can exist, garnering political support for changing laws to better design policies, and rethinking project management and evaluation metrics to facilitate a “failure as learning” workplace.

Denmark’s Universal Basic Wage prototype has come with structural changes that will provide benefits far beyond one program. Upon realizing that prototyping with some citizens and not others might be considered unequal treatment, the Danish government passed laws to ensure any new innovation methods comply with their constitution. To be able to test new policies before devoting time and resources to enact them, they’ve altered their policy design process. And they’ve continued this work, with the Universal Basic Wage and other concepts, in the face of loud critics who claim the prototype is a failure due to lack of scientific viability with such a small sample.

What lesson from your work with the private sector do you think would be most helpful for public-sector innovators?

Ruben Ocampo (@ruben_ocampo), founder, Conic Group: I work with a lot of product development teams in the private sector. And, because their role is to develop and not to maintain or support, there often is a disconnect between a product hitting the market and the support and lifecycle management it requires. So my advice is to also think about the lifecycle of your solution and ensure there is clarity as to how it will continue to be funded and supported — as well as when it will make sense to retire or replace it.

Brianna Sylver (@BriannaSylver), founder and president, Sylver Consulting: When it comes to innovation, there is a fine line when it comes to inclusivity. There are teams who want to include everyone in the process because they’re so excited about the change they are promoting. However, the reality is that most people are reticent to change. And if you include folks in the innovation process who don’t have a vested interest in the outcome, it’s too easy for them to “drop bombs” to block process rather than lend a constructive voice that works to refine your idea.

Mark Jones, founder, SD Lab: Most of my clients benchmark their services against their direct competitors, which often makes them think they are doing a better job than they really are. Customer (and resident) expectations are set by all of the services they experience, regardless of the industry. A better approach is to look for best-in-class experiences and then use that as a starting point.

What is the one tip that is most important for these 35 Champion Cities as they launch into their Mayors Challenge testing phase?

Amanda Noonan, strategy director, frog design: Inclusive design rules! Take an inclusive, collaborative approach to thinking and working through potential innovations and their impacts for and with your communities. Listening to, observing, and working with residents won’t only help you build services and products that meet critical needs, it helps you do so in a lower-risk way that has the potential to present less-evident but nevertheless critical opportunities.

Ryan Baum (@RMBaum), principal, Jump Associates: Be ruthlessly committed to “why” you are building your idea, but be very flexible with “what” your idea actually is. If you are running tests with the intention of learning — not just with the intention of validating — your idea will likely change many times in the next six months. That can be incredibly disorienting. In order to maintain a North Star through all that turmoil, you need to have a strong understanding of your “why.”