Q&A with Sree Sreenivasan: How the Met Museum is engaging audiences with digital technology 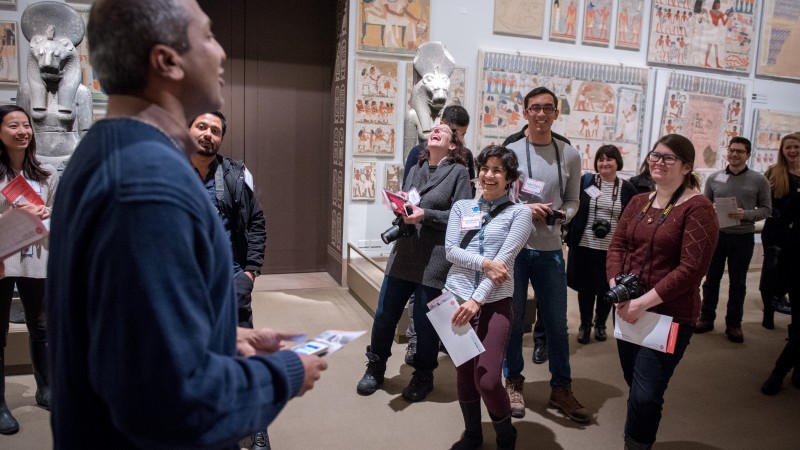 The chief digital officer at the Metropolitan Museum of Art, Sree Sreenivasan, joined Bloomberg Philanthropies’ Kate Levin for a wide-ranging conversation with the foundation’s staff about how digital technology is changing the way audiences engage with culture.

KATE LEVIN: One of the biggest tensions in the world of culture is around this notion that digital technology is going to replace actual, live experiences. Could you talk to us a little bit about the challenges of making sure that the device doesn’t replace the art?

SREE SREENIVASAN: That’s really a fundamental question, and it turns out this was a question 20 years ago when the museum’s website was being created.  They said, “If you put pictures of the Met online, then people won’t come to the Met.”

And one way I think about it is, there’s something at the Grand Canyon called a Sky Bridge. It’s this glass-bottomed bridge that’s shaped like a giant “U” 1,000 feet above the Grand Canyon floor. I think it’s the scariest thing ever.  So of course my kids are obsessed with it.  They have seen every YouTube clip, GoPro video, website picture – and all of it makes them want to go more to this thing, not less.  And I’m going to be dragged there one day.  I’m going to be on the cliff safe looking the other direction.  But they’re going to be walking through it.

I think young people, especially, are obsessed with experiences.  And the more we can show what’s possible, the more people say, “Okay, if the digital version is this good, then imagine the physical experience.”  That’s why you see a lot of experience-type shows in the city.  Remember the Rain Room and Sleep No More?  And what we have to do is make the experience in museum galleries really work.

I think there’s nothing better than you and a piece of art in the gallery with no technology.  But people want to use it, and now visitors complain that when they go to a museum, they’re looking at art through the lens of others’ cell phones.  You’re looking at a painting, and then someone moves a phone right in front of you – or, worse, an iPad, right?  These big iPads are being put in front of your face.

We’ve joked around and said, “Wouldn’t it be interesting to have one hour every week where you say, ‘No phones in this particular gallery?’”  What would happen?  Then it might be crowded in a different way.  So we don’t know.  And we’d love your thoughts and ideas on how we’d make that work.

KATE LEVIN:  The “quiet car” of the museum world.

KATE LEVIN: Another concern for cultural organizations is that if you provide lots of digital access, you get bombarded by an outside world that many people aren’t trained to manage and think about.  How have you led the Met in being able to cope with these new portals for conversation?

SREE SREENIVASAN:  Well, it’s important to remember that people may want to control access.  Even today, I hear sometimes from younger curators – not just at the Met, at other places – “I don’t want to be online.  I want it to be about the work.  I don’t want my photograph, I don’t want my contact information to be on the Internet.”

Well, in every other part of people’s lives, they’re used to being able to find folks, including in the education field, right?  For example, Noam Chomsky’s phone number and e-mail address are on the Internet.  It doesn’t mean he’ll return your phone call, but in theory he’s reachable.  Every Nobel Prize winner you’ve ever heard of is somehow, at least in theory, reachable.

So what we have to do is to acknowledge that opening things up will at first result in more questions.  But people are so grateful to have that open access that if you can give them ways to understand it – training, online tutorials – things will eventually kind of simmer down.  But that fear of being overwhelmed is a logical one, and I think the cultural world needs to be more open just generally.

KATE LEVIN: Have you done any work with the staff at the Met to try and help them understand how to use social media?

SREE SREENIVASAN:  Yeah, absolutely.  In fact, twice a year we do something called Digitalpalooza at the Met.  It’s a two-hour session where the entire staff is invited to come and learn about what digital activities are happening, and more importantly, get tips on Instagram and Twitter through small-group coaching sessions.

And then we also get them to try Oculus and virtual reality and other new tools, because we want and need all of us to work together.  We’ve doubled our social media team to two people, which isn’t enough.  But we have 2,200 employees.  And what if 2,200 people could start to think that the Met’s future success is based on everybody being involved – within reason, and within some guardrails? 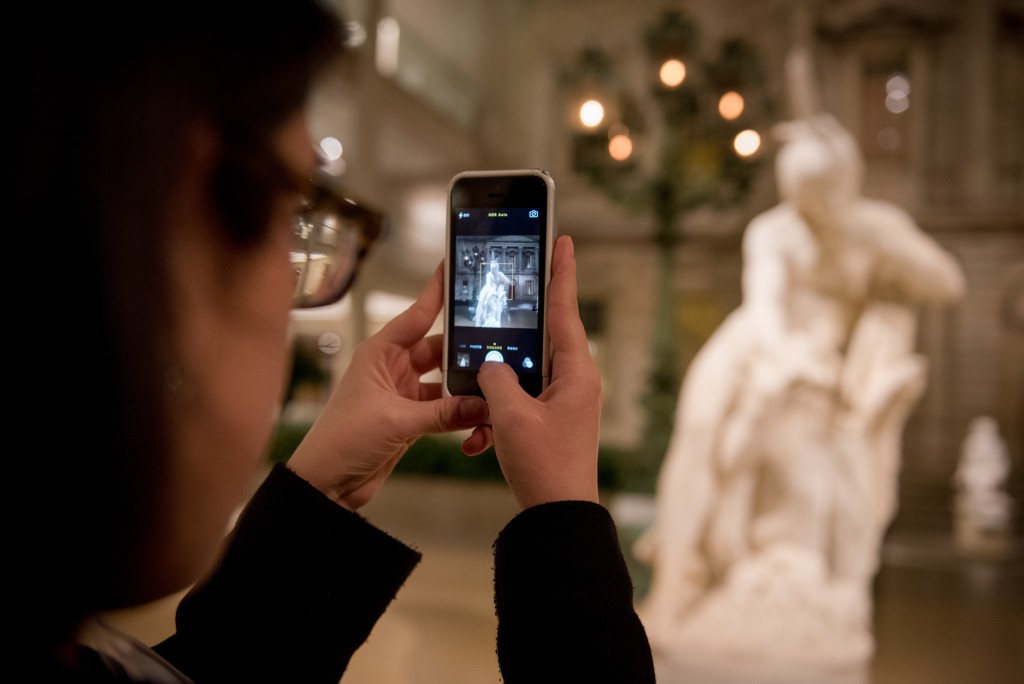 KATE LEVIN: One final question. Being a curator is about retaining and stewarding precious knowledge, and often that comes with an attitude that letting it out is going to dumb it down or allow people to somehow contaminate it.

As you’ve gone through this process of trying to get people comfortable with risk, what are some successful arguments you’ve made for the benefits of opening up?  And are there approaches you’ve taken that haven’t worked?

SREE SREENIVASAN:  It’s a great question, and I think about it all the time as we tell people what we do.  Recently, we had Sal Khan from Khan Academy talk to us.  We’re doing a little pilot project with them.  And he said something really dramatic to me.  He said the vast majority of people who can benefit from Khan Academy have never heard of it and will never hear of it.

And if you can’t give away free education, then how can you engage people?

Part of the answer is that we have to plan for every single thing we do.  An external marketing plan, of course, but also an internal plan – like our Digitalpalooza – for getting stakeholders excited and understanding what we’re doing.

I think a lot of folks who want to be change agents want to hit grand-slam home runs.  Instead, I’m a big proponent of hitting lots of singles, doubles, perhaps some triples, and getting people engaged.

It can be helpful to think about the restoration of the Le Brun painting that we featured in blog posts.  We didn’t have our interns write the posts. They were done by two of our most senior staff – Keith Christiansen, head of European Paintings, and Michael Gallagher, head of Painting Conservation.  And frankly, curators, conservators – we have 100 scientists at the museum – they are not thinking like a lot of us do, in quarters, months, years.  They’re thinking decades and centuries.  And they know that this vase will be here for the next 500 years, 1,000 years.  And whatever new technology you’re talking about, that’s going to come and go.  So how we increase our scholarship and access to it without dumbing it down is absolutely the bottom line.

AUDIENCE QUESTION: Can you talk a bit about the interaction between the dispersal of information through these digital platforms and the event-driven ways that folks really want to connect in person?  It’s not just the costume gala, but big exhibitions seem to be something that people want to show up for. How does the museum think about that?  What’s changing right now about how people engage?

SREE SREENIVASAN:  We’re all thinking about that, and we don’t always have the answer.  For example, we just had this China: Through the Looking Glass show at the Costume Institute. It had more visitors than the McQueen show a few years ago, which had much more buzz – there were lines out the door.  Some of you may have stood in those lines.

And when you look at the data, you have to wonder why there were not that many lines for Through the Looking Glass, but there were more people?  One reason was that the exhibition footprint was much bigger and there were multiple entry points, so those things make a difference.  But we have to think about how we appeal to people – how do we get them to these one-off things?

At the museum, we also think about our permanent collection.  How do we balance what we’re able to do between special exhibitions and the things you can always see in the galleries?  That’s why a lot of the Bloomberg Connects funding has gone into making our permanent collection come alive.  I think we live in a blockbuster world, where everybody’s excited about the tentpole events, as they call them.  But how do we get people to notice what is available every day?

KATE LEVIN:  I imagine part of your challenge is around the tendency to drive towards things we can count.  That’s something we see in this building all the time: we want results, we want impact.  And the easiest form of impact is something you can enumerate.  But one of my favorite phrases is, “Not everything that counts can be counted.” How do you figure out what makes a quality digital engagement as opposed to a digital engagement that enumerates really well?

SREE SREENIVASAN:  One example of that is Tom Campbell’s Instagram.  He will post something and then we’ll see something I never thought would happen, which is Jenny Smith saying “@JohnSmith, let’s go see this.”  And two minutes later, we see @JohnSmith saying “we’ll go this weekend.”  And suddenly the Director of the Met has made a sale.  Of course that’s not really how we think about it, and there’s no way to count every one of those reactions.  But it’s happening.

KATE LEVIN: And then figuring out did the Smiths actually go see what Tom posted, and did they have an enriching experience or was it just checking a box? That’s the deeper move that every cultural organization is trying to provide and understand.

SREE SREENIVASAN: Right, and we need your ideas.

AUDIENCE QUESTION: I really liked the Charles James exhibit last year because it showed the x-ray copies on tablets of how a dress was constructed.  I thought that was a really neat way to use technology to enhance the exhibit.  Can you tell us anything about what’s next at the Met at the intersection of art and digital?

SREE SREENIVASAN: We’re thinking about that and trying to find the right balance.  Tom and I are not necessarily fans of digital in everything.  That’s why being able to put content on people’s phones is so important – many visitors will always have better phones than whatever technology we can provide in the galleries.  The Costume Institute show next year is about fashion and technology, and it’s sponsored by Apple.  So you can imagine just how tech-filled the exhibit design could be.  But we have to start balancing so that not everything is technology, and see how that works.  The main thing is that we don’t have all the answers, and we want to learn, and we want to share what we’re learning.