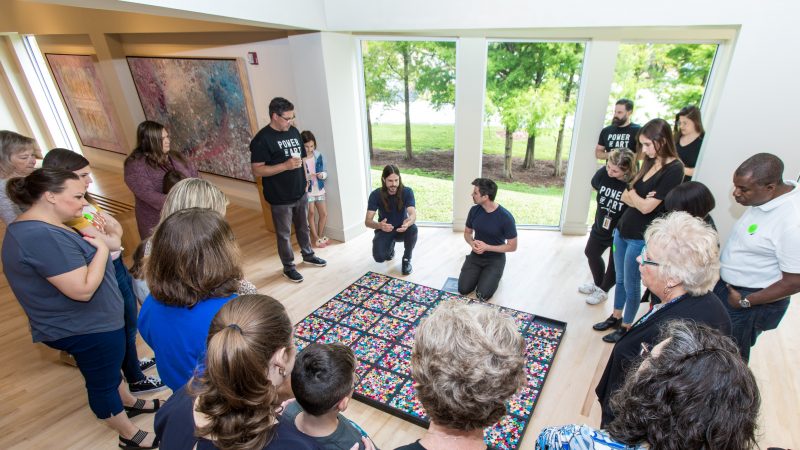 THE LADD BROTHERS AT A POWER OF ART COMMUNITY WORKSHOP HOSTED AT THE CORAL SPRINGS MUSEUM – PHOTO COURTESY OF THE CITY OF CORAL SPRINGS.

In the weeks following the shooting at Marjory Stoneman Douglas High School, the Cities of Coral Springs and Parkland, Florida in partnership with the Coral Springs Museum of Art, applied to Bloomberg Philanthropies’ Public Art Challenge – an initiative that provides U.S. mayors funding for temporary public art projects that address a civic issue affecting their communities. The two cities worked together, with the hope that public art could aid in healing in the wake of this tragedy.

Their selected project, “Inspiring Community Healing After Gun Violence: The Power of Art,” is a curated series of five large-scale temporary public art installations, designed to be created with community members. Each of the five installations provides a variety of opportunities for people of all ages and backgrounds to participate in providing healing and community building.

The projects draw from and builds upon the Coral Springs Museum of Art’s Healing with Art program,  an art therapy program begun by the museum in the immediate aftermath of the shooting. Stephanie Dockery of Bloomberg Philanthropies’ art team spoke with the museum’s lead art therapist, Raquel Farrell-Kirk, about the role of art therapy.

STEPHANIE DOCKERY: How is art therapy unique in helping people process trauma, specifically the effects of gun violence on a community?

RAQUEL FARRELL-KIRK: Art therapy’s emphasis on images makes it especially effective at dealing with trauma. After a traumatic event, your memory of the event may be fragmented and visual or sensory. We allow people to use images to express themselves and in that way the art making helps them make sense of these memory fragments. Also, the positive sensory experience of using art materials can be relaxing and help ground people in the present.

STEPHANIE DOCKERY: The Coral Springs Museum of Art was ready to serve as a center for crisis counseling just one day after the mass shooting at Marjory Stoneman Douglas High School. How did the museum’s team prepare so quickly to serve as a healing resource for the community?

RAQUEL FARRELL-KIRK: The Museum had some experience with this through their “Art for Warriors” art therapy program that served veterans for years. When the tragedy happened, the Museum was able to spring into action and serve the community by creating Healing with Art. The museum was willing to think outside the box and I’d encourage others to do the same.  If you face an event in the community and feel called to respond, don’t be afraid to make an offer of help. Find partners and build something together.

STEPHANIE DOCKERY: How has the museum’s Healing with Art program evolved over the past year, and how has the community responded to it?

RAQUEL FARRELL-KIRK: Our program began as a “drop in open studio,” available to the entire community because gun violence trauma extends beyond those who were present at a shooting.  Having our program open to everyone removed any barriers that might prevent people from getting needed help.

In almost two years, the program has become more structured and has developed specific goals. The original Healing with Art open studio has developed into two separate but related groups. One for high school students and one for school personnel. We are now connected with community agencies and collectively providing a variety of treatment options.

RAQUEL FARRELL-KIRK: The Public Art Challenge made it clear that a goal is to bring together members of the community, and for a city to work together in new ways. The logistics of public events to create artwork in public spaces requires a lot of coordination with public services like the Police Department, the Parks Department, the Mayor’s Office and the public. We’re working across two sets of agencies, mayors and two cities and we’re here to serve.

Coral Springs and Parkland residents have shown brilliant resilience since the shooting. We saw selfless individuals and businesses donate food to Healing with Art events. We received help from art and music therapists, and trauma specialists who volunteered hours and days of their time to provide support and counseling to all in need.  We witnessed students and families gathering and supporting one another at these events. The Public Art Challenge is providing a new avenue for us to come together as a community.

STEPHANIE DOCKERY: Tell us about working with artists like David Best and the Ladd Brothers for the installations created for Power of Art – how have the two projects been different/similar?

RAQUEL FARRELL-KIRK: Both David Best and the Ladd Brothers created projects that were driven by community participation. The Ladds are well-known for their work with non-artist groups like children who are visually impaired and adults who are incarcerated. They are well suited to work on a project requiring community rebuilding and sensitivity.  Their artwork uses a highly collaborative approach – something critical to forge bonds after tragedy.

David Best’s Temple of Time was a 35-foot temporary public art installation constructed in three weeks by David, his “temple crew” of volunteers, along with 1,000 members of the Coral Springs and Parkland communities. Anyone could visit, write on the walls, ceilings, floors or leave mementos behind. David and his team are very approachable – they have extensive community work experience, and they were sensitive to our recent and devastating trauma. Being invited to share insight about trauma and its impact on this community with his team has been a highlight of my time on this project.

The Ladd Brothers at a Power of Art community workshop hosted at the Coral Springs Museum – Photo courtesy of the City of Coral Springs.

The installation served as a space for those who are grieving to gather, reflect, and leave behind difficult feelings. The community once again came together on May 19 for the Temple’s ceremonial burn, designed to release some of the pain left inside. Eight families of victims attended the ceremonial burn. The 34 participants who lit the temple represented the 17 who died and the 17 who were critically injured.

The Ladd Brothers worked with the students of Marjory Stoneman Douglas High School, first responders, families and others in the Parkland and Coral Springs communities on a collaborative installation called the Scrollathon. The final piece, comprised of the 1000 attendees’ fabric, opened to the public on May 24th at the Parkland Recreation Center, and remains on view until next year. As part of their process, there was a focus on people sharing their emotional reactions to creating art, during a “show and tell” style dialogue. Because of this collaborative dialogue, I worked with the artists to create a trauma-informed version of the Scrollathon workshops.

STEPHANIE DOCKERY: Next, you’ll be working with the other artists on this project including Pulitzer Prize-winning photojournalist Carl Juste, performance artist Kate Gilmore and the multidisciplinary artists of R&R Studios. Now that you’ve completed two projects, how do you see that influencing new projects going forward?

RAQUEL FARRELL-KIRK: I have learned that as each of these projects comes to life, I need to work to understand the artists’ intent and reinterpret them as an art therapy process. This way I can consider the community’s participatory experience and ensure that it aligns with Power of Art’s goals to foster healing, highlight resilience, and rebuild community.

The third of five public art installations from the Power of Art program, The Yellow Walk, created by Guggenheim Fellow Kate Gilmore, with performers from the Coral Springs and Parkland communities, opens on November 8, 2019 at 2pm and will be active for 26 hours throughout the weekend. The large-scale interactive public art installation and performance piece will take place at the Art Walk in Coral Springs.