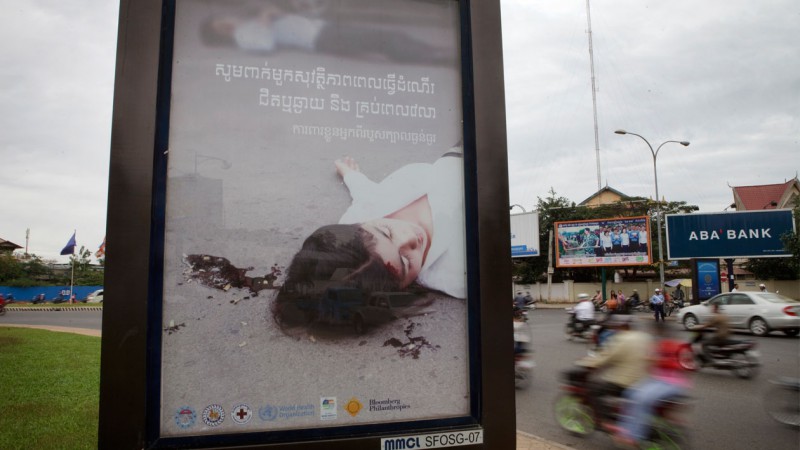 In the Indian state of Andhra Pradesh, motorists cited protection from rain, dust, and even being seen transporting a woman other than one’s wife as benefits of wearing a helmet when driving their motorcycle. A few mentioned escaping fines. Sadly, no one mentioned safety. The fact is: wearing a helmet can decrease the risk of injury by 70% and death by 40%.

One pillar of the Bloomberg Philanthropies Global Road Safety Program is the development of evidence-based mass media campaigns designed to change attitudes and behavior towards road safety. Developed after extensive research and testing with target audiences, the Bloomberg Philanthropies Global Road Safety Program has produced and implemented 19 campaigns, totaling 33 television commercials and 17 radio spots, across 10 countries. In Brazil, Cambodia and Mexico, these hard-hitting campaigns were the first ever public campaigns to show realistic and graphic consequences, including injury and death.

Several factors contribute to behavior change. What works in one country may not work well in another.

In Andhra Pradesh, India, after the Bloomberg Philanthropies Global Road Safety Program aired a realistic campaign showing the consequences of drinking and driving, 75% of the province’s target population spontaneously mentioned drinking and driving as one of the main causes of road traffic crashes.

While mass media campaigns played a crucial part in raising public awareness and knowledge of road safety, these campaigns are one component of a broader road safety effort that has led to successful changes in knowledge and behavior of road users worldwide.

Strong and comprehensive road safety legislation, stringent enforcement of traffic laws, advocacy efforts, and data collection are also essential to reducing road traffic fatalities and injuries. Through the Bloomberg Philanthropies Global Road Safety Program, we are working with partners across the globe to apply these interventions and help save lives.