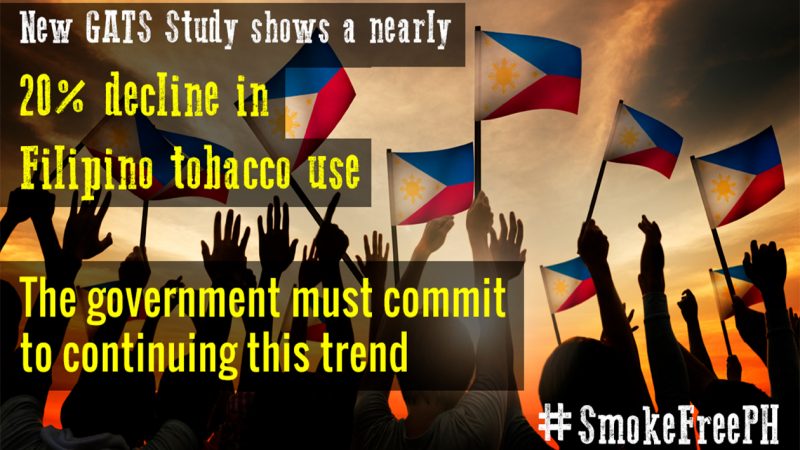 Low- and middle-income countries like the Philippines have increasingly become a target for tobacco companies, where regulations against tobacco use are lax and in some cases public awareness about the health impacts of tobacco use have been blunted by seductive marketing campaigns – and strong lobbying on the behalf of tobacco companies. Tobacco use is a leading cause of preventable death and primary risk factor for illness like cancer, respiratory illnesses and a host of other diseases that low- and middle-income countries can least afford to contend with.

The Department of Health recently announced good news coming out of the Philippines – there are at least 1 million fewer smokers. Data from the Global Adult Tobacco Survey (GATS) revealed that between 2009 and 2015 smoking declined from 29.7 percent to 23.8 percent.

The primary driver behind the change can be attributed to important policies that Bloomberg Philanthropies champions, like tobacco taxes.

Philippines has made significant progress in adopting several of the World Health Organization’s MPOWER policies, a technical assistance policy package supported by the Bloomberg Initiative to Reduce Tobacco Use.

There is no doubt that tobacco use has dropped significantly due to the tobacco control policy gains achieved in the six years between 2009 and 2015, providing a case study for other countries

The Sin Tax Reform Act, signed into law December 2012 by then-President Aquino, simplified the tax structure on tobacco and alcohol products and significantly raised taxes, effectively doubling the cost of a pack of cigarettes.

It is widely applauded as a case study for other countries keen on raising revenues for programs that benefit citizens while also protecting public health. For example, it provided critically needed revenue for health programs such as universal health care for the poorest Filipinos.

While the recent study is good news and a sign of progress, there still remains a significant amount of work to be done.

Nearly a quarter of Filipinos continued to use this deadly product in 2015.

Through the Bloomberg Initiative to Reduce Tobacco Use, we encourage and support adoption of 100 percent smoke-free public places, implementation of graphic health warnings on tobacco packages, and the continuation of hard-hitting public education campaigns. GATS shows almost all surveyed Filipinos (97.2 percent) support a complete prohibition of smoking in indoor workplaces and public places.

There is more to do, and we congratulate and urge the Philippines to continue this course to end the tobacco epidemic.