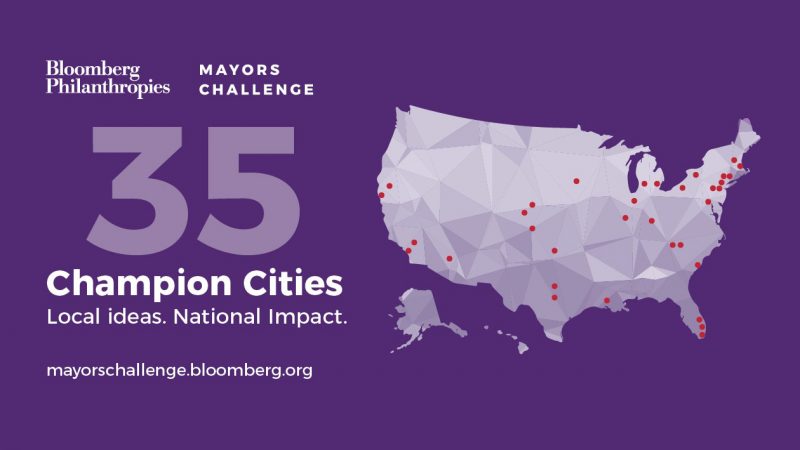 Thirty-five U.S. cities, from as large as Los Angeles, Calif., and as small as Ithaca, N.Y., are about to launch into an unprecedented experiment to solve some of our country’s biggest challenges. Each of these finalists—or “Champion Cities”—in the 2018 Mayors Challenge will spend the next six months testing and refining their big ideas for tackling everything from opioid addiction to climate change. And while only five cities will win prizes later this year—including one $5 million prize and four $1 million prizes—all will walk away winners, and that much closer to solving some of our cities’ toughest concerns. Here are just five of the ways these 35 Champion Cities are taking charge:

Among the 35 Champion Cities, no single problem comes up more than climate change. And mayors are tackling it from a number of angles. Several seek to address the impacts of severe storms, extreme heat and rising seas. Three cities that have no choice but to look for new ways to co-exist with water—Charleston, S.C., Miami, Fla., and Miami Beach, Fla.,—want to create alert systems that will help inform residents’ long-term decisions, like property investment, and short-term decisions, like how to change your commute to work during a flood.

The second most prominent issue among the 35 cities is public health. Responding to drug abuse, and the opioid crisis in particular, is a major theme. Cary, N.C. hopes to get real-time data on which neighborhoods are most impacted by opioids by analyzing traces of the drugs in the city’s sewers. Ithaca wants to create a one-stop support hub for drug treatment, including an on-site “consumption space” where addicts can use drugs under supervision. And Huntington, W.V., is addressing “compassion fatigue” among first responders who have become flooded with calls related to heroin overdosing. The city wants to embed mental health professionals with EMTs, both to help prevent burnout and also to help connect the drug abuser to long-term treatment services.

At a time when homelessness in the U.S. is rising for the first time since 2010, two cities are proposing innovative ways of addressing the problem. Austin, Tex., thinks Blockchain—the technology behind cryptocurrencies such as Bitcoin—can streamline the paperwork behind homeless services, particularly when it comes to verifying persons who may not have identification. Meanwhile, Los Angeles wants to encourage homeowners to build backyard housing units; in exchange for financial incentives, they would commit to housing a homeless resident for three years. Elk Grove, Calif., has an idea that may prevent people from becoming homeless in the first place: Work with landlords to create a common rental housing application. For renters, it could save hundreds of dollars on application fees. For landlords, it could reduce time running credit checks and verifying references.

The ridesharing revolution has some mayors thinking about how to leverage the model to benefit low-income residents better. For example, South Bend, Ind., wants to collaborate with rideshare services and employers to help people without cars get to work. It’s expected to particularly benefit part-time and shift workers who have difficulty reaching factories and offices via transit at off-peak hours. In Boulder, Colo., the city plans to run three experiments aimed at boosting access to shared electric vehicles. Durham, N.C., is also planning a series of experiments—in their case, to test four low-cost methods that apply behavioral insights to nudge people away from single-occupancy commutes.

The need to address inequity is a powerful thread running through many plans of the 35 Champion Cities. In two cases, cities are acknowledging that the problem is structural—and requires new structures to fix it. In Grand Rapids, Mich., where city leaders fear many of their African-American and Hispanic residents aren’t benefiting from the city’s recent economic success, they are looking to create a grassroots-led community census in order to gather data that will be used to more equitably align city budgets and services. And in Boston, Mass., where residents in some of Boston’s neighborhoods use 311 twice as often as others, city leaders hope to infuse equity into their approach to allocate resources for sidewalk repair and street maintenance by augmenting 311 dispatch requests with data on community need, pavement condition, and usage.