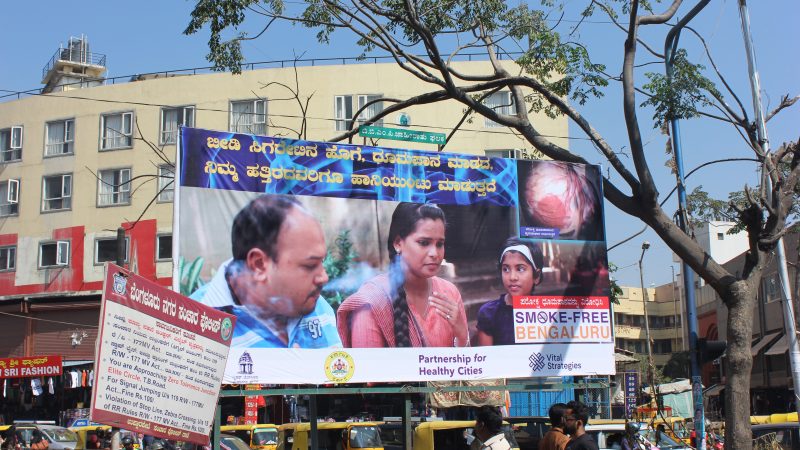 Nationwide campaign in India finds the for every $9.20 spent on tobacco control ads, one death is averted

Bengaluru is a city on the rise.

In India’s southern Karnataka state, the city has become the tech hub of the global south, with a burgeoning start-up community and an Asian base for the world’s largest technology companies.

But a smoke-filled cloud hangs over Bengaluru’s success. A national law prohibiting smoking in public places has not led to smoke free spaces, and many individuals are unaware of the harms of exposure to secondhand smoke in workplaces and homes.

Bengaluru is fighting to change the status quo. As part of the Partnership for Healthy Cities – supported by Bloomberg Philanthropies, Vital Strategies and the World Health Organization –Bengaluru has committed to becoming a smoke-free city.

To improve enforcement, city officials completed a baseline survey to assess compliance with no smoking laws in over 1,000 public settings. The survey found that people were only complying with the law in 10 percent of public spaces.

Armed with this information, the city launched a training program for police officers, helping officers understand how smoke-free laws are violated and how they can penalize establishments that do not enforce smoke-free laws. It is also an opportunity to educate officers on the dangers of secondhand smoke. To assist law enforcement, the city has set up an online portal for citizens to report violations.

It’s not hard to understand why a city would focus on enforcement – a law is only effective if it’s being enforced. But a mass media campaign? Studies have shown that successful mass media campaigns can change individual behavior, shift broader social norms and build popular support for tobacco control policies. And they’re quite cost-effective. A nationwide campaign in India found that for every 6 cents spent, one person attempted to quit; for every $2.60 spent, one person quit permanently; and for every $9.20 spent, one death was averted.

Think about that for a minute—for just under $10, these ads can save a life.

We know that campaigns are most successful when they have strong messaging and targeted delivery. In Bengaluru, the government found that while the public understood the dangers of smoking, they did not realize that secondhand smoke was dangerous too. Exposure to secondhand smoke increases the risks of contracting lung cancer by 30 percent and coronary heart disease by 25 percent. Worldwide, more than 890,000 deaths per year are caused by secondhand smoke and the campaign’s messaging focused on groups most vulnerable to it: children, women, and those in workplaces that still allow smoking.

To deliver the message to a broad audience, the city aired radio ads, erected billboards in high-traffic areas and ran a social media campaign.

The city plans to increase enforcement of the smoke-free laws and expects to see an increased number of penalties over 18 months to coincide with increased social media reach. It will conduct a midterm assessment in July and end-line assessment in October to measure results.

Already a leader in tech, Bengaluru is now leading the charge for smoke-free cities—one that many others across the globe will hopefully soon follow.

Dr. Rao is the Chief of Head Neck Surgical Oncology at Healthcare Global Enterprise Cancer Hospital in Bengaluru, India, and the inventor of a $1 speaking device for throat cancer patients. He has been recognized worldwide for his efforts to bring together nonprofit and private efforts to reduce smoking in India, particularly in his home state of Karnataka and the city of Bengaluru. Dr. Rao completed his training at the Tata Memorial Hospital in Mumbai has been a visiting scholar at Johns Hopkins University and the Pittsburgh School of Medicine.