Explainer: What is prototyping? 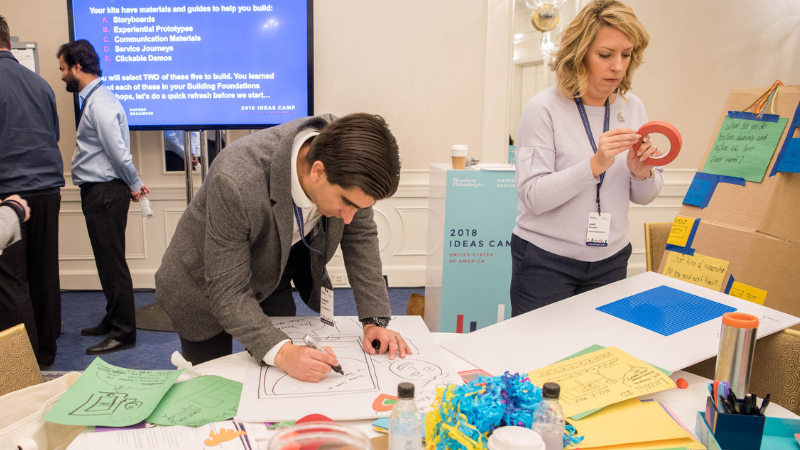 A team from Miami Beach, Fla., prototyped and tested an idea for a new app as part of last year’s Bloomberg Philanthropies Mayors Challenge.

Whether it’s the car you drive or the smartphone in your pocket, most of the products and services you use today went through many rounds of prototyping, testing, and iterative development before they made it to market.

And while that’s not always been true for the things local governments produce, that’s beginning to change.

As the tenets of human-centered design percolate into city halls, a growing number of city leaders are beginning to prototype and test pieces of new programs and services before launching them. They’re coming to realize what the private sector has known for years: that prototyping is a critical innovation tool, one that reduces risk, saves money, and yields programs and services that respond to what users actually need.

Keep reading to learn more about what prototyping is, how and when to use it, and why prototyping is not the same thing as piloting.

What is a prototype?

A prototype is an early sketch, model, or mock-up of an idea that people can interact with and offer feedback on. For local officials considering a new service, program, or policy, prototyping is a way to ask questions, test assumptions, and learn what users want. It’s a low-stakes way to kick the tires on an idea, or even just a piece of an idea, before investing time and money into building a fully functional solution.

Prototypes can take many forms, from a sketch to a 3-D model to simply play-acting how a new service might work. They can be made out of virtually anything: paper, LEGOS, pipe cleaners, cardboard — whatever works to make the program under development feel like something people can interact with and respond to.

For example, the innovation team in Durham, N.C., recently prototyped a potential new composting service by asking eight households to put food waste into a special bucket for two weeks and then take photos to document what they liked — and didn’t like — about the process. Tel Aviv prototyped a new school lunch service by testing three methods of quickly serving food to crowds of high schoolers. Philadelphia prototyped a new and more humane intake process for children who get arrested by role playing it with youth, police officers, social workers, and parents.

An easy way to prototype an idea is to draw it on paper along with a couple of descriptive bullet points. “Put that down in front of someone and get them to respond whether it does or doesn’t make sense to them,” said Kelly Costello, CEO of Panorama Innovation, a design firm that has consulted with a number of U.S. cities. “Prototyping can be down-and-dirty and very simple early on.”

Another kind of hand-drawn prototype is a storyboard. That’s almost like a cartoon, with one scene after another, showing each step of a journey through a service or process. Costello recently worked with Grand Rapids, Mich., on storyboarding the steps involved in approving new development in the city with an eye toward understanding where residents have a say in the matter. “A storyboard is great,” she said, “because it forces you to say Step One is this, and this next thing is Step Two. It makes you think about the end-to-end experience.”

Why would I use a prototype?

Prototyping serves a number of purposes along the way of turning an idea into reality.

To start with, building a prototype is a great way to make an abstract idea concrete, something that people can see and interact with or respond to. That’s especially important early in the process. “Just getting people on the same page about what this idea even is can be hard,” said Stephanie Wade of Bloomberg Philanthropies, who works with dozens of city hall innovation teams using prototyping. “We can build so much more understanding about the idea when we can see it visually than when we’re just talking about it in words.”

Prototyping also helps you test the assumptions baked into an idea. According to Brianna Sylver, a design consultant who works with a number of cities, a typical idea for practically anything in government has at least 30 assumptions embedded in it. Any assumption that is critical to the success of the idea — but where there’s low confidence that it’s true — is ripe for a prototype, she said.

Often, testing uncovers fatal flaws. Sylver recently worked with a team from Pittsburgh on an idea for developing a Groupon-like marketplace between suppliers of energy-efficient building materials and residents. One big assumption was that these groups wanted a marketplace like this at all. The team prototyped the idea by drawing it on a poster and presenting it to potential suppliers and customers. Within minutes, it was clear that neither side was interested. The team dropped the marketplace concept and moved on to more fruitful ideas for encouraging homeowners to make energy efficiency upgrades.

That’s how prototyping reduces risk and saves money. “It helps you get to the right answer faster and cheaper,” Wade said, “so that by the time you’re investing a large amount of capital into a new program or policy with far-reaching implications, you know you’ll have the impact you hope to have.”

Finally, for cities that are working to engage residents on a deeper level than they have in the past, prototyping is a tool that enables genuine co-creation. As Durham’s innovation team prototypes composting with residents, they’re incorporating feedback directly into the program design. That helps build buy-in around the idea, said the i-team’s Shannon Delaney. “The more community ownership there is in the program, the better the chances it will succeed,” she said. “When you can say, ‘I helped develop this’, you feel valued and appreciated.”

What can be prototyped?

Pretty much any program, service, system, policy, or procedure under development in government can be prototyped. Long Beach, Calif., prototyped the furniture layout in a refurbished city park. Charleston, S.C., prototyped a mobile app for communicating information about flooding. South Bend, Ind., prototyped transportation options for helping part-time and shift employees get to work.

In addition to prototyping new ideas, Costello said, cities should get in the habit of prototyping changes to existing programs. “You might have been doing a process a certain way for a number of years, but you’re getting ready to change it in some way,” she said. “That’s a great time to prototype and learn.”

When is the right time to prototype?

For cities trying to solve a certain problem, there’s a lot of work that needs to take place before you get to prototyping. First, you need to research the problem and frame it in a way that invites ideas for solutions. Once you’ve got some promising ideas to develop, that’s when you’re ready to prototype.

It goes in stages. Prototypes tend to be quick and dirty — or “low fidelity,” as designers say — in the beginning. They might be drawings meant to elicit initial feedback, or to gut check that an idea makes sense at all. Prototypes at this early stage aren’t very functional, but there’s still a lot of flexibility to change the idea based on user feedback. As an idea advances and becomes more fully fleshed out, the prototypes get more sophisticated and begin to more closely resemble a functional solution. “As you move through prototyping,” Sylver said, “the fidelity and functionality goes up and the flexibility goes down.”

It can be an almost continuous process. One prototype generates feedback, which leads to improvements that can be prototyped to generate more feedback, and so on. These cycles of iterative refinement can repeat dozens of times, Sylver said.

“One of the key philosophies is you’re using prototyping to support visualization of your idea and shaping the experience around it,” Sylver said. “So you’re prototyping and testing for as many times and cycles as is needed to ensure that you have buy-in around the full idea and it’s delivering against the impact you desired of it.”

What’s the difference between prototyping and piloting?

While prototyping is relatively new in the public sector, most government leaders are quite familiar with piloting new programs. They’re not the same thing.

Generally speaking, a pilot program — even one that’s seen as experimental — is going to test a mostly baked idea over weeks or months. By contrast, a prototype tests pieces of an idea, often very quickly, in an iterative process.

“When you’re at the point of piloting something, you’re creating the experience you envisioned in its totality,” Sylver explained. “So there are a lot of resources, both time and money, that have to go into that process. Whereas with a prototype, you may be taking on smaller chunks of the full service and testing an assumption embedded into it.”

Wade puts it another way. “If you’re doing a pilot, you don’t want it to feel like an experiment. You still have room to learn, but your certainty level should be pretty darn high by the time you’re piloting,” she said. “When you’re prototyping, the idea should be changing constantly.”

Why isn’t prototyping used more in the public sector?

There’s several reasons why prototyping is still just catching on in the public sector.

Part of it is that the tools and techniques from the design world are only starting to arrive in government — often via newly launched innovation offices that are increasingly hiring professional designers on staff. Then there’s the habit in government to rely on experts to craft programs for people rather than with them. And some of it comes from discomfort with down-and-dirty experimentation. Prototyping exposes flaws and celebrates the idea of failing fast and often. Some in the public sector simply can’t stomach that.

As Sylver sees it, prototyping will thrive as an innovation tool in cities that can flip upside down the way they usually work. They’ll need to start with a more open-ended search for solutions to problems, rather than with a particular idea in mind. “When we make a commitment to solving the problem, versus a commitment to taking action on a solution, then there’s opportunity to pivot,” Sylver said. “That means the value of prototyping can be realized.”