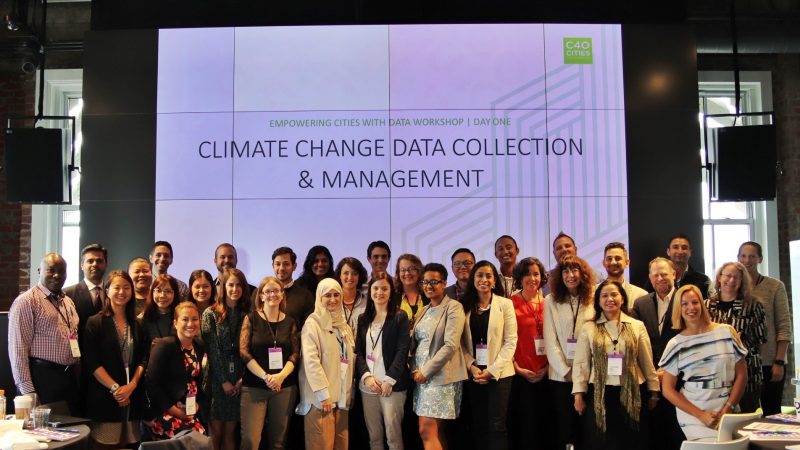 The “Empowering Cities with Data” workshop convened C40 member cities and California local governments to talk about and share ideas on how they are managing, using, and communicating their climate data to address the global challenge of climate change.

As Michael Bloomberg says: “If you can’t measure it, you can’t manage it and you can’t fix it.” Cites are leaders in the transition to sustainable economies but first they need to know where they stand. The first step for cities to get on the sustainability ladder is to measure and report.

To help with this challenge, on August 8th-9th Bloomberg Philanthropies hosted the “Empowering cities with data” workshop in collaboration with C40 Cities Climate Leadership Group, CDP, and the Global Covenant of Mayors for Climate & Energy. The two-day meeting was held in the City of San Francisco, in a region known as the global epicenter of tech innovation. Under San Francisco’s Mayor Edwin M. Lee, the city has reduced its greenhouse gas emissions by 28% from 1990 levels, while its GDP has grown by 78% and its population by almost 20%.

“As the innovation capital of the world, San Francisco is successfully using data to address our biggest challenges, such as climate change and enhancing the quality of life for our residents,” said San Francisco Mayor Ed Lee. “By taking a smart and unique approach to interpreting and analyzing data, we can be effective working with our many business and community partners to reduce our greenhouse gas emissions.”

The “Empowering cities with data” workshop convened C40 member cities and California local governments to talk about and share ideas on how they are managing, using, and communicating their climate data to address the global challenge of climate change. City leaders from around the world, including Sydney, Paris, Mexico City and the host location of San Francisco all shared their challenges and experiences. The workshop also brought together practitioners from global businesses and NGOs including Google, World Resources Institute, Natural Resources Defense Council (NRDC) and AECOM, to talk about innovations in data driven decision making for sustainability.

The workshop emphasized the growing influence of local governments in addressing global problems, particularly in social and environmental sustainability and climate change mitigation and adaptation. It highlighted the increasing shift that cities are making in using new data methods to provide robust, empirical evidence for urban policy-making in addition to enhancing public service delivery and processes for citizen engagement and civic participation.

The purpose of the event was to open a space for city leaders to share best practices, learn from each other, and meet others from the private sector, NGOs and peer cities to collaborate with, while learning about techniques for unlocking the power of data. In this forum, cities were able to discuss the technical tools they have been developing as well as talk openly about obstacles and challenges such as data availability and management.

The role of cities in the transition to the low-carbon economy is becoming ever more central. They are vital in the global fight against climate change, and acting now brings significant benefits locally as well. As described by the city leaders’ inspiring presentations, cities are increasingly implementing local policies that recognize sustainability investments as essential to developing new markets, creating jobs and making their cities more attractive for citizens.

Facilitating this transition is data. Only with the right information can city leaders and investors make the best decisions and drive effective action. The CDP cities program, supported by Bloomberg Philanthropies funding, provides the data which underpins successful climate action. CDP is an essential pillar within the work of the Global Covenant of Mayors for Climate and Energy and the C40 Cities Climate Leadership Group, providing the established reporting framework and evidence base with which cities and key partners can track emissions reductions, adaptation progress, and share best practice.

Every year CDP sends out a targeted request for environmental information and now have 533 cities reporting through the system – representing 600 million people. We’ve seen a 10-fold rise in the last six years and a 70% increase since the Paris Agreement was adopted – pointing to the rapidly accelerating level of engagement among city leaders. San Francisco has been reporting its climate data to CDP since 2011 and the City’s Department of Environment continues to use CDP’s data and visualizations to develop local climate action policies and communicate the City’s emission reductions progress.