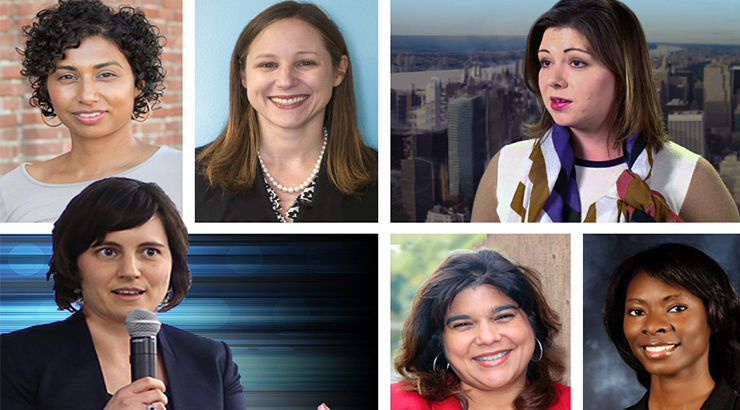 One of the biggest misconceptions about the field of data science is that it’s all about the numbers. But, as anybody in our business will attest, statistics and spreadsheets don’t mean a whole lot if you don’t also understand the people, the problems, and the promise they represent.

Our work has never been “all about the numbers.” It is, however, increasingly about the number — and the diversity — of life experiences our teams bring to the table that deliver big and important impact in cities. Currently, women represent only 25 percent of the data scientists in the public and private sectors. But as two women who lead What Works Cities — Michael Bloomberg’s investment to help 100 U.S. cities expand upon the data and evidence work he pioneered in New York City Hall — we can tell you that there is a growing number of women at the table.

These women are leading by example and encouraging more women and girls to enter STEM and computer science programs. And they’re women who are helping position our whole field — men and women alike — to think more critically about the biggest challenges facing our cities while, at the same time, ushering some of the biggest advances in public-services delivery in more than a century. This means better outcomes for all people, more responsive governments, and a pipeline of inspired, talented and emboldened females in the public-sector innovation workforce.

Here’s a quick look at some of the incredible work of just six of the many women who are leading the public-sector data revolution.

Nuria Rivera-Vandermyde has led data-driven projects in governments from Puerto Rico to Minnesota. Now, she heads a portfolio of projects across Minneapolis city government, including the performance program Results Minneapolis, the city’s innovation team, and Minneapolis’ effort to ensure equity across the city — including everything from city contracting to neighborhood redevelopment. She summed up what seems to be her overall guiding principle in 2016, when describing her work to help small businesses navigate city-regulatory processes: “Ultimately,” she said, “we’re trying to help people prosper.”

When late Mayor Ed Lee first appointed Joy Bonaguro as the city’s first Chief Data Officer in 2014, she went on a listening tour and immediately found out city employees needed more training on the use of data. So her DataSF team partnered with the Office of the Controller to launch DataAcademy, a program that trains city employees in everything from the basics of Excel spreadsheets to courses on project management, reading statistics, and data visualization. “What I see my role being is…minimizing barriers to increased use of data in decision making,” Joy told the GovEx “Data Points” podcast. “Our work in DataSF is really about empowering use of data, in part, by addressing each of those core challenges.”

Monica Croskey Chaparro was the driving force behind implementing Raleigh’s new performance-management framework, the cornerstone of which is a silo-busting tool she devised called CORStat. Twice a year, top city managers convene all the department heads relevant to achieving each of the six core goals identified in the city’s strategic plan. They sift through the relevant data, ask questions about areas that need improvement, and leave the meeting with action items to keep the city on track to reach its goals. Chaparro also is making data skills development for staff a priority. She’s developed an academy for city staff to learn skills such as picking performance measures, using data to make decisions and data visualization. Professors from local universities teach some of the classes, while others are taught by city workers who already have the skills.

San Jose has, in short order, emerged as a data leader with one of the most solid smart-city approaches in the land. While her humility will not let her utter the word, Shireen Santosham can claim credit for much of this momentum. She has leveraged her partnership with What Works Cites to rethink data governance and to integrate low-cost evaluation into a wide range of service areas. Notably, she also has taken advantage of San Jose’s position as the largest city in the Silicon Valley to both increase digital access for all residents and to capitalize on the latest technological advances. “We have a front-row seat to cutting-edge innovations that will change the way we live and work for years to come,” she’s written. “The benefits should not be underestimated.”

Kate Bender and Julie Steenson are the brains behind KCStat, Kansas City’s strategy for engaging city leaders and citizens in the many ways data measurement can help their city. One element of that approach includes a quarterly citizen-satisfaction survey, the results of which feed directly into city planning. A 2016 survey, for example, turned up widespread frustration with blighted buildings, prompting the city to propose — and voters approve — a $10-million bond measure to pay for the work to help demolish them. “Any city can collect data,” City Manager Troy Schulte said about Kate’s and Julie’s work. “It takes a smart and connected city to use that data to improve the lives of residents.”