Introduction: Ca Dao Duong is a high school senior from Oklahoma and a participant in Bloomberg Philanthropies’ College Access and Success initiative, CollegePoint. Through the initiative, Ca Dao was paired with a one-on-one virtual Advising Fellow, Betty Duran-Becerra from partner organization Matriculate, who helped her identify the best fit schools and financial aid opportunities. Ca Dao now plans to attend the University of Southern California in the fall and expects to study Business Administration with an emphasis on International Relations. 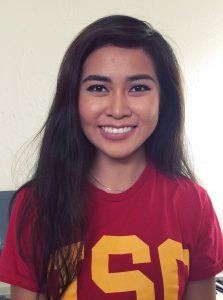 I came to America in 2009 when I was 11-years-old. For me and my parents, college was always an eventuality — there was no other acceptable path. Unfortunately, three months after we arrived in California, my family had to move to Oklahoma to find jobs. I remember thinking to myself, “I didn’t come to America only to stop here.” I wanted to succeed — to make it big. I wanted to become successful in the business/political battlefield and one day come back to help my politically oppressed country (Vietnam). So from sixth grade to tenth grade, I believed the only way I could do this was to get accepted into a top-ranking college with an established reputation and the education quality necessary for my dream career. However, as senior year slowly but steadily approached and reality began to take its toll, it became clear that to study at an out of state college was a financial impossibility that I refused to let my parents shoulder. Swallowing back my disappointment, I agreed with my parents and planned to attend a local college, where two-thirds of my classmates would also go.

I had my first contact with CollegePoint back in summer 2015 through an innocuous email promising me a free college advisor. At first, I did not pay much attention when I filled out the basic registration information, thinking it was just another mass-produced advertisement targeted toward prospective college students. How wrong I was. In August, Betty, a sophomore at Columbia University from CollegePoint partner organization Matriculate, sent me a text introducing herself as a CollegePoint advisor. She asked me if I still wanted to be in the program. I said “YES!” and it was possibly the best decision that I have ever made. Before CollegePoint, I had a dream but no practical plan. I did not know what steps to take and how to choose a college that was right for me.

From August to May, Betty and I connected for an hour and a half every week to talk college. We put together a college timeline — a list of what needed to be done by certain deadlines. Some of the things on the timeline are things I never even knew were needed for the application until Betty made them known to me. We made commitments on when to get my recommendation letters in after she taught me how to obtain one, how high I should aim on my next ACT scores,  when to finish my QuestBridge scholarship essays, and more. Unlike many of my classmates who lacked information about how to approach their college application process, I felt ready and well-prepared because I had a personal advisor/friend who was more than capable in helping me through this period. More importantly, when I told Betty I was planning to attend a local school, she prompted me to look at other colleges, and she helped me diversify my college list based on their reach levels and geographic locations. At first, I was only going to apply to one or two Ivy League colleges merely to test myself, to see if I could get in. I was not so sure about actually going to any school outside of Oklahoma. Yet, when I listened to Betty’s story about coming to America when she was not much older than I was and being able to rise above everyone else to get accepted to multiple Ivy League schools, I was truly inspired. I looked to her as my role model, following her footsteps in many aspects, from formatting my resume to make it look more professional, to applying to QuestBridge, to telling stories in my college essays instead of writing lackluster paragraphs.

I applied to 11 different schools with an “I can do it too” mentality, and with Betty as my biggest cheerleader. Even though our sessions were through a webcam, they helped in more ways than my school counselor ever could. For example, I had trouble expressing myself in college essays because of my language barrier. How did Betty help me? She sat with me on Skype after midnight when deadlines were near to help revise everything. Furthermore, when making the college list, Betty urged me to look at schools on the west coast for geographic diversity. Previously, I was only looking at east coast schools. Ultimately, I was accepted to and chose the University of Southern California from the list she recommended because it seemed to have what I wanted, both socially and academically.

It is now June 2016, and I could not be prouder or happier to prepare for my freshman year at USC. The friendship I built with Betty through our online conversations was a huge boost to my morale, because it showcased the genuine care and support I received. Without Betty or CollegePoint, I never would have looked anywhere beside east coast schools, or my local college – a school that was too small for my dreams. CollegePoint truly cared about my success, and their support prompted students like me to try our best.  CollegePoint changed my life and put me on track for the future I truly want, and I am ever grateful.