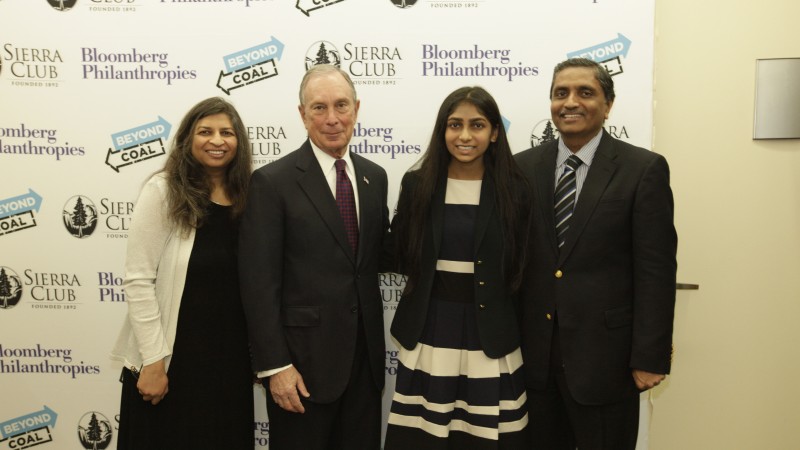 Earlier this month, we announced we will invest an additional $30 million in the Sierra Club’s Beyond Coal campaign, with the goal to secure the replacement of half of the U.S. coal fleet with clean energy solutions by 2017. Reducing our reliance on dirty coal will not just help save the environment – it will save lives. One of those lives is Amee Kapadia, a high school sophomore from Alexandria, VA who personally experienced the health detriments air pollution brings, as well as the positive results of shutting down a coal-fired power plant in her community. This is her story.

When I was younger, I developed atopic dermatitis and started getting severe reactions to dust and smog. Now, however, it is starting to cause respiratory problems with symptoms similar to asthma. A couple years ago, I was driving through New Jersey to visit my grandparents. It started out like any other car trip, long and boring. But when we passed by a coal plant, my breath became constricted and a bout of wheezing ensued. This event opened my eyes to the realities of the air pollution coal plants cause. I could no longer travel without a facemask, and I was at the threshold where further exposure would lead to asthma.

I also live near Alexandria, Virginia, home to a coal plant that has been retired, thanks to the efforts of many people here today, including Mayor Bloomberg and the Sierra Club’s Beyond Coal Campaign. Since then, the air quality in my community has significantly improved. Fortunately, I am now able to stay outdoors for a prolonged period of time without triggering skin rashes or wheezing.

Our generation deserves to grow up in a world where worries about air pollution do not plague us, where we can go outside and enjoy nature in its unharmed state. Walt Disney once said, “If you can dream it, you can do it.” We definitely have been dreaming of a clean and renewable future for a long time, and with the Beyond Coal campaign we are finally turning those dreams into a reality.