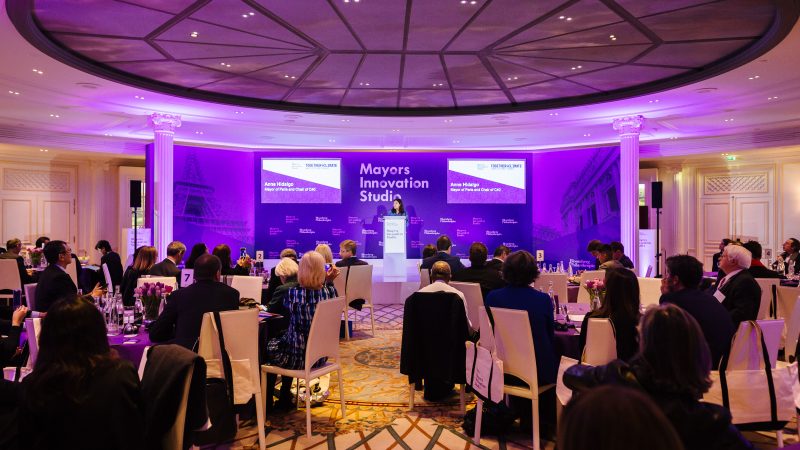 At Bloomberg Philanthropies, we work with thousands of city leaders in hundreds of cities around the world—and yet there is one topic that comes up time and time again: Disruptive technology. That’s because mayors understand that new technologies are shaping our future. They also know that if they want a stake in the game, they first have to get in the game.

Partnerships enable progress and broaden impact, but too few cities invest in the capacity to form these partnerships—to develop, maintain, and sustain strong collaborations over time. This is particularly true when it comes to cities’ relationships with disruptive-technology companies, the Ubers, Airbnbs, and Amazons of the worlds. That’s why we devoted this year’s Mayors Innovation Studio, held October 22 in Paris, to these partnerships. And it’s why we brought together some of the best minds—from both the public and private sectors—to discuss what works, what doesn’t, and how we can all get better in the near future.

Here are three of my biggest takeaways from the day:

While the problems each community faces feel unique, the reality is that we’re all tackling similar challenges. That’s why collaboration between cities is so important. It provides mayors the opportunity to learn from the only people who really know what they’re going through—other mayors. Even before the first Mayors Innovation Studio session got underway, two mayors from different continents found themselves engrossed in conversation about a problem they have in common: water shortage. They talked about how they’re both involved with disruptive-tech companies to find new ways to increase supply and decrease demand, and their discussion, it seemed, gave them both a broader understanding of possible solutions. As the day proceeded, another mayor talked about the ways his own work with disruptive-tech companies—specifically Uber and Lyft—might have been smoother if cities worked more in step with each other. “Other cities were talking to these companies at the same time I was,” he explained, “but I had no idea what they were discussing because I wasn’t part of those conversations.” Finally, Thomas Bach, president of the International Olympic Committee, explained how the host cities of the next three summer games—Tokyo, Paris, and Los Angeles—are building off the success of the London to reduce the Games’ carbon footprint. He explained that the IOC views sport as part of the climate solution, the Olympics as an incubator, and cities as the drivers of innovation.

Partnerships should be iterative.

Successful relationships between cities and disruptive-tech companies are flexible and evolve in real time. One mayor recounted how, when she partnered with a tech company to take a more data-driven approach to municipal governing, both parties had a different understanding of the data that would be required. As she noted, “We had to learn how to speak the same language before we could really make it work.” After that first not-so-successful attempt, both sides now know each other better and are better positioned to try again. Several mayors also noted that the pace of change is so fast that, when they first started working with disruptive-tech partners, they couldn’t have understood the partnerships’ full potential—or it’s possible benefits or ramifications for residents. And that’s why, they explained, it’s so important that any partnership provide the change as a city’s understanding grows.

As new technologies disrupt existing markets, city leaders and private-sector partners sometimes find their traditional roles upended as well. When one city, for example, partnered with a modular-home provider to solve for a shortage in affordable housing, both city leaders and their private partners found themselves in unfamiliar terrain. The city provided a loan to finance the venture, becoming a venture capitalist of sorts. And the tech company, meanwhile, had to create a way to ensure the homes were always owned by lower-income families, and became part regulator. At the outset, neither imagined the partnership would require them to step so far out of their comfort zone. But their willingness to reimagine their roles has proven successful—both in their partnership and in solving real-world challenges.

Find out more of what we heard from city leaders at Mayors Innovation Studio here.