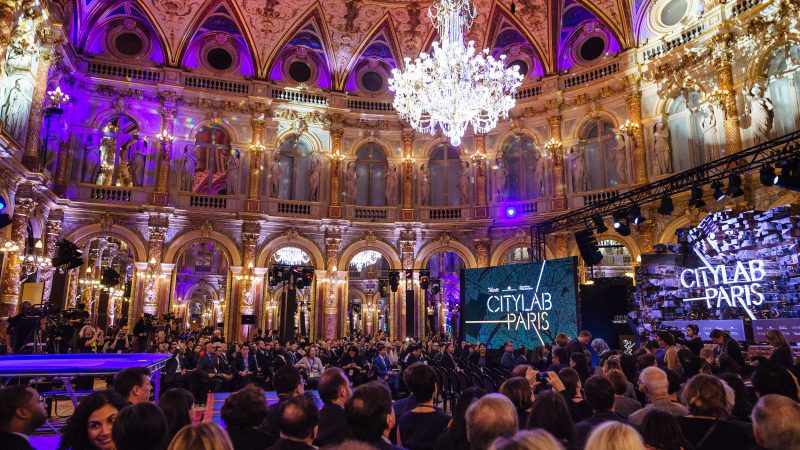 By Andrea Coleman and Megan Sheekey

This week city leaders and urban innovators from around the world convened in Paris for CityLab 2017, hosted by the Aspen Institute, The Atlantic, and Bloomberg Philanthropies. On Sunday, October 22, nearly 40 mayors gathered to address an issue that is top of mind for city leaders: new, disruptive technologies—from driverless cars to drones—and how cities can harness this tech to improve life in cities.

Government is no stranger to private sector collaboration, and many municipalities have a history of working with businesses to get the best for their residents. Effective partnerships between government and business traditionally draw on mutual interests—valuing a strong economy, skilled workforce, and healthy environment. However, these two sectors can struggle to find the structure, language or resources needed to achieve shared goals.

Today, that struggle is amplified both by the pace of change—traditional industries are forgotten and new ones are created overnight—and by the complexity of the problems cities face, including everything from rising obesity and devastating natural disasters, to changing demographics and widening inequality. As companies like Uber and Airbnb redefine the business world, many cities are playing catch up and fighting to adapt to technological change, while also protecting public interests.

In our work with cities, some key values have emerged that can help mayors to harness the power of disruption, rather than being upended by it, and take on the big challenges that face their cities:

On Sunday, Molly Turner of the Haas School of Business at University of California, Berkeley, walked mayors through these values. As a former Airbnb executive, she saw first-hand the unintended impacts of Airbnb ripple through cities around the world. She also saw how the company and, in turn, hundreds of cities, responded to those impacts – in some cases with success, and in others with frustration. According to Turner, cities that embraced these values were best equipped to make the most of their industry partnerships.

The mayors engaged in the discussions at CityLab expressed overwhelming willingness to harness disruptive technologies in industries like mobility and housing to improve life for their residents. But they also recognize the challenges faced by city government. As one mayor noted, “City government is historically designed to manage problems, not to solve them.”

So how can government keep pace with new technologies, and move away from primarily transactional discussions with the private sector? And how can mayors create a culture of risk taking and communication with sectors outside government? As Jim Anderson, head of Government Innovation at Bloomberg Philanthropies, highlighted, “Far too few cities are investing in the capacity to manage partnerships.”

For mayors who truly want to embrace public-private collaboration, a first step is to dedicate staffing to these efforts. In doing so, they can ensure alignment with city priorities, coordinate across agencies, leverage data and existing resources, and ensure compliance with government regulations. They will also be creating an essential entryway for partners.

Turner noted that city governments who offered a point person to interface with Airbnb (not someone who was just squeezing in a meeting around their real job) were far more likely to succeed.

And a message to business and philanthropy: one of the smartest investments you can make is to support that municipal capacity. With ever-constrained budgets, city leaders are often wary of allocating public funds for dedicated staff to manage relationships outside of government. By helping to increase capacity, you may be surprised by the talent and resources that can be unleashed, and your ability to accomplish collective goals and address public needs.

Andrea Coleman is a senior program officer for the Government Innovation programs at Bloomberg Philanthropies. The programs support 270 cities around the world to better solve problems and share the most promising ideas to improve life for residents.

Megan Sheekey works with mayors and city leaders around the world to help foster and structure strategic public-private collaboration supporting civic priorities. She advises Bloomberg Associates clients and Bloomberg Philanthropies grantees on ways to leverage resources and the design of vehicles that strengthen investments.