By the Numbers: New Study Shows Success of Anti-Tobacco Policies 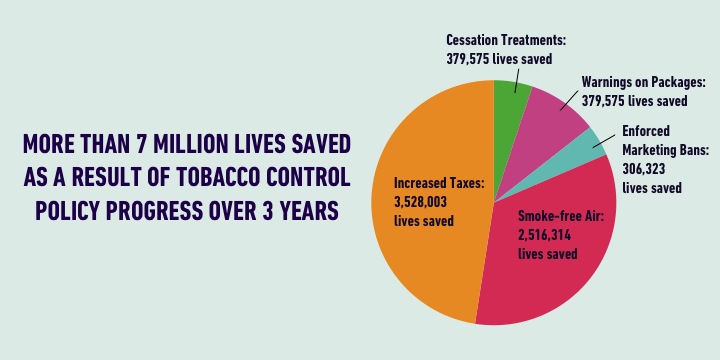 As Mike Bloomberg often says, “if you can’t measure it, you can’t manage it.” That’s why I am excited to make public the results of a new study that shows more than 7 million lives have been saved around the world as a result of tobacco control policy progress—and many more lives stand to be saved if we continue to pursue proven tobacco control policies.

The study was conducted by experts at Georgetown University, along with Bloomberg Philanthropies, and is the first to estimate the lives saved as a result of tobacco control policy progress.

The adoption and implementation of evidence-based policies to reduce tobacco use in low- and middle-income countries is the primary goal of the Bloomberg Initiative to Reduce Tobacco Use. With this study, we now have concrete evidence of the success of the MPOWER tobacco control measures as well as the headway the global tobacco control movement made in just three years (2007-2010).

The new study follows up on the Bloomberg-funded World Health Organization Reports on the Global Tobacco Epidemic, the first of which was released in 2008. That report provided a landscape view of global tobacco policy—which countries had critical tobacco control policies in place, and which did not.

It found that less than 10% of the world’s population was covered by one or more of the critical MPOWER tobacco control measures. The WHO report has been repeated twice since its initial release, and the progress has been promising, with 41 countries putting in place at least one MPOWER measure since the first report.

An update of the study is planned for next month, following the release of the next World Health Organization Report on the Global Tobacco Epidemic, which will show five years of progress in the global tobacco control movement.