As U.S. Officially Exits the Paris Agreement, States, Cities, and Businesses Forge Ahead 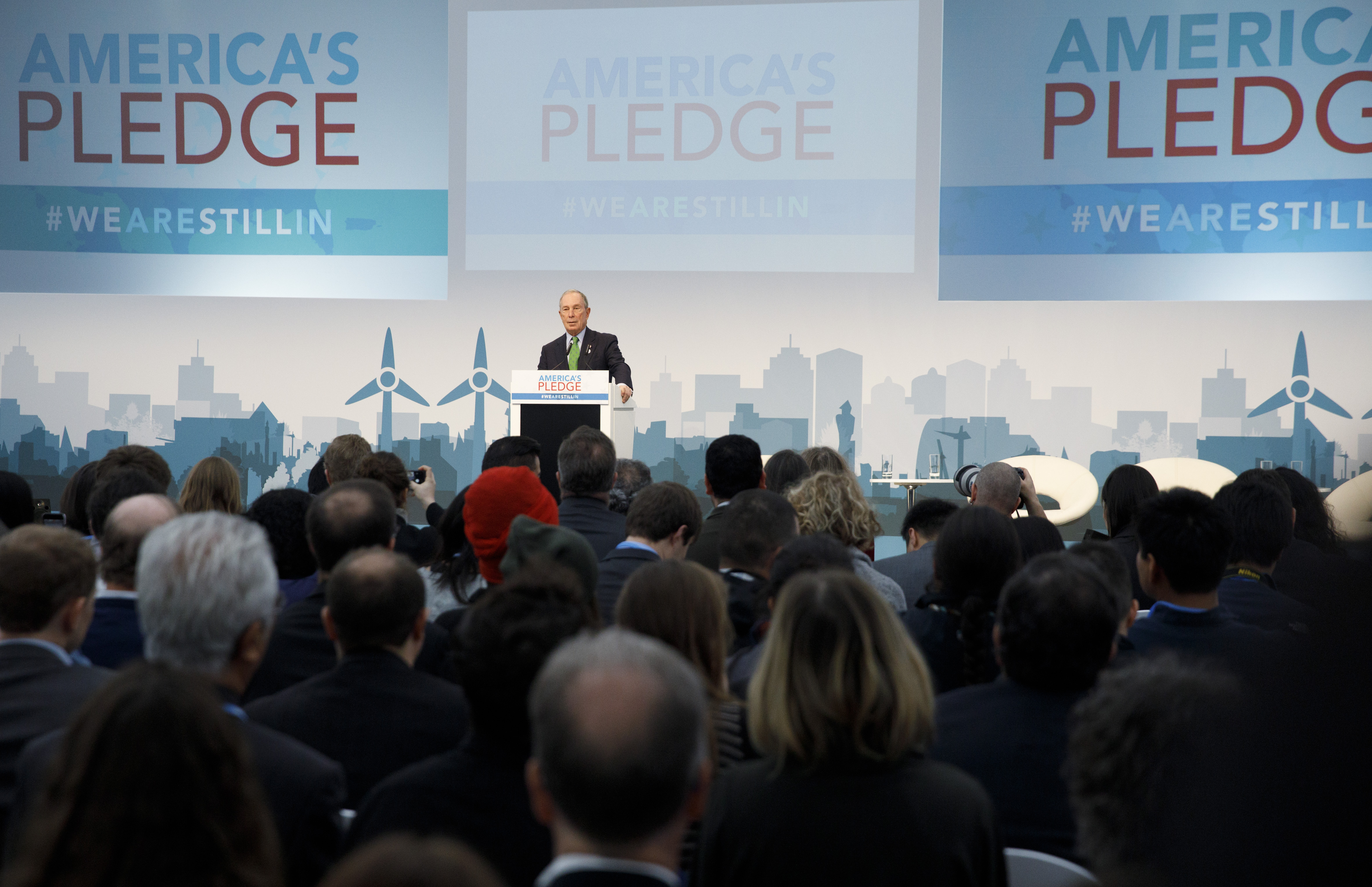 In June 2017, President Trump’s first year in office after campaigning on a pro-fossil fuel agenda, he took one of the first major steps in enacting that agenda when he announced he would withdraw the U.S. from the Paris Agreement. Today, just hours after polls closed, that decision officially goes into effect.

As we’re seeing the effects of the climate crisis from coast to coast and around the world – from extreme heat and drought to intensifying storms and wildfires, rising costs for health care and disaster relief, and catastrophic weather events like the typhoon in the Philippines – it couldn’t be a more dangerous time to turn our backs on climate leadership. President Trump is well-known for his refusal to listen to the consensus view of the world’s scientists who say we should treat climate change as a serious threat. But by withdrawing, he’s also showing how he ignores the advice of economists, like those at the International Finance Corporation who found that commitments under Paris from the top 21 developing countries will create a $23 trillion investment opportunity by 2030. Furthermore, the decision cuts against the global trend of national governments strengthening – not weakening – their climate commitments, from the European Green Deal and recent climate pledges from China, Japan, and South Korea, to the rapidly growing number of commitments from national and global businesses to slash carbon emissions.

But despite opposition from the White House these past four years, we’ve made some tremendous progress: a growing number of Americans believe we need to take stronger action to curb emissions, and that belief is being represented by more than 4,000 leaders in states, cities, and businesses who have filled the United States leadership gap on climate. Now, these climate champions will be more critical than ever to our continued progress.

Leading from the Bottom-Up

In response to a lack of federal leadership, U.S. states, cities, businesses, and other non-federal actors have taken it upon themselves to keep moving us towards our Paris Agreement goals. These coalitions committed to climate action represent nearly 70% of US GDP, nearly two-thirds of the U.S. population, and over half of U.S. greenhouse gas emissions.

Our long-term, clean energy future depends on mobilized, passionate leaders who understand the gravity of the climate crisis and are harnessing the power of technology and innovation to create healthier, more sustainable communities. This bottom-up approach exemplifies that.

Bloomberg Philanthropies recognizes the power and impact that subnational climate leaders can have. Since 2017, we have been strongly committed to supporting local communities, giving them the tools to fight climate change and provide a healthier environment for their residents. Some of our initiatives include:

Each year, our America’s Pledge report – led by brilliant researchers at the University of Maryland, the Rocky Mountain Institute and the World Resources Institute – aggregates and quantifies bottom-up U.S. climate leadership to give us a picture of the progress we’ve made and outline scenarios for the future. This year’s report found that renewable energy has proved more resilient than fossil fuels despite the pandemic and economic downturn, and that there is more climate action from states, cities, and businesses action than even one year again. These bottom-up leaders alone could deliver up to 37% reduction in greenhouse gas emissions below 2005 levels by 2030.

That number may seem ambitious, but it’s within our reach because of the growing chorus of non-federal actors who are fighting climate change in their communities, today:

This is just a small handful of examples that show the progress being made on the local, state, and corporate levels to combat climate change and demonstrate our national commitment to climate action under the Paris Agreement, even as our federal government rescinds its leadership role.

Obviously, the work must continue. This year’s unprecedented wildfires, hurricanes, and temperatures are part of a worldwide pattern showing the increasingly devastating impacts of inaction. Meanwhile, COVID-19 has demonstrated just how interconnected we are on this planet, underscoring the urgent public health need for clean air, clean water, and a healthy planet.

At Bloomberg Philanthropies, we believe in a shared responsibility to ensure a sustainable climate and breathable air for future generations. This requires a global, unified approach from local and national actors alike, including – and especially – the United States. Subnational actors cannot be forced to do it alone. Creating lasting environmental impact requires a unified approach of local action, advocacy, and policy change.

To limit global warming to 1.5°C and avoid the worst impacts of climate change, the federal government must re-join the Paris Agreement, reengage as a global leader with the major economies of the world , and work with non-federal leaders to drive coordinated and ambitious climate action.

If the federal government re-engages, according to our latest America’s Pledge analysis, we can cut emissions by 49% from 2005 levels by 2030 and put America back in alignment with the Paris Agreement, reaching net zero emissions by 2050.

Until then, US states, cities, businesses, and others will continue to carry the torch on climate action.