Accelerating Clean Air Action, One Data Point at a Time 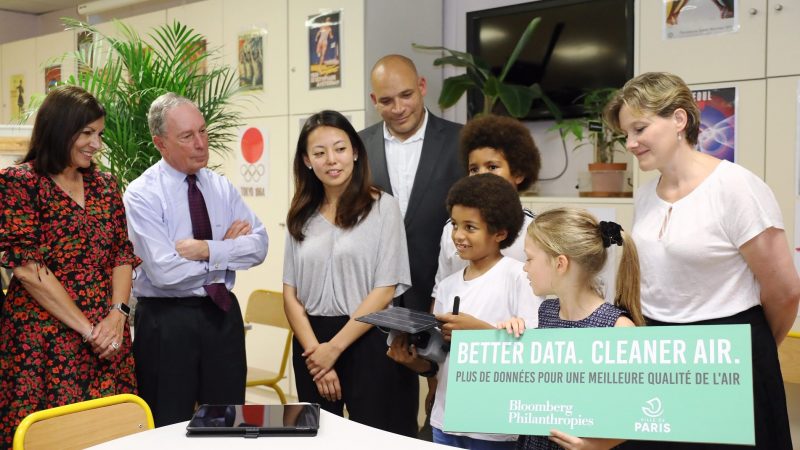 The launch of a partnership between Bloomberg Philanthropies and the City of Paris to improve air quality and better understand pollution patterns throughout the city, June 2019

Chances are, if you’ve lived in an urban environment, you’ve experienced air pollution. Maybe you’ve seen the smoggy skyline of your city, or the thick grey smoke released from the exhaust of a car. The truth is, 90% of the world’s population breathes dirty air — so whether you’ve witnessed it or not, air pollution has impacted your life. And the COVID-19 pandemic has only underscored the harms of pollution, with recent studies suggesting that poor air quality may be associated with coronavirus death rates.

So, what measures can we take to limit – and someday eliminate – air pollution? To answer that question, we need more and better data. Through Bloomberg Philanthropies’ partnerships across the globe, we’re helping cities to measure exactly how much pollution there is, pinpoint its sources and understand the real-life impacts. This data can lead to smart policies and safer and healthier cities, and further our mission of ensuring better, longer lives for the greatest number of people.

Air pollution is one of the biggest threats to public health today. In Europe, more than 400,000 premature deaths are driven by poor air quality every year, according to the European Environment Agency. Often, these outcomes fall the hardest on the most vulnerable communities who may be exposed to higher levels of pollution and poor-quality environments.

To take urgent action, Bloomberg Philanthropies recently announced a new partnership with the Brussels-Capital Region Government and Brussels Environment that aims to enhance air pollution monitoring to help cut pollution levels in the city. This initiative – a first for Brussels – combines the power of partnerships, citizen action, technology and data and supports the EU’s environmental ambition put forward in the European Green Deal. Together, we’ll help monitor pollution levels throughout the city and use the data to map pollution levels, identify hotspots, and inform local policies. This initiative also supports research on the health impacts of pollution and engages teachers to bring air quality topics into the classroom. Belgium alone sees 9,000 premature deaths linked to air pollution every year – a statistic we’re hoping this program will help lower significantly.

Our Brussels partnership expands on a strategy that runs through many of our programs: leading and developing solutions from the bottom-up. We engage local partners and local authorities to design and lead impactful projects that can accelerate climate and environmental action.

As Mike Bloomberg often says, “If you can’t measure it, you can’t manage it,” and this is especially true for air pollution, as the lack of data is often a barrier to taking stronger action. In order to effectively mitigate particulate matter, we have to know how much there is in any given region and how it’s affecting people, which requires widespread deployment of the most advanced technology and innovation.

Our partnership with Planet Labs, a company that operates the largest single constellation of Earth-imaging satellites in orbit, is the embodiment of that cutting-edge approach. In September 2019, Bloomberg Philanthropies launched the Satellites for Climate Action initiative in collaboration with the State of California and Planet Labs to map and quantify problems that were previously unknown or inaccurately measured. This partnership leverages Planet’s near-daily coverage of earth together with our expertise on environmental projects to provide greater accuracy, efficiency, and geographical precision when actively supporting and enacting more targeted climate mitigation strategies.

Equally critical is the measurement of how air pollution is impacting the health of our global population. Released yesterday, this year’s State of Global Air report from the Health Effects Institute finds that air pollution was linked to 6.7 million deaths last year – including 500,000 infant deaths – making air pollution now the fourth-highest health risk globally. These findings are essential pieces of the puzzle to ensure continued, aggressive global efforts to reduce air pollution’s growing threats to our health and that of future generations.

2020 has revealed more than ever how a public health emergency can immediately change our global economy and society. And as governments around the world work to strengthen their economies, and if we act wisely, the response to this crisis can also be a turning point in the battle against the climate crisis. At Bloomberg Philanthropies, we aim to use the untapped potential of data to make the invisible visible and empower cities, residents, and governments to tackle the urgent challenge of air pollution. Especially on the launch of the Brussels Clean Air Partnership, we are grateful to work with our many valued partners to ensure clean air now and for future generations.