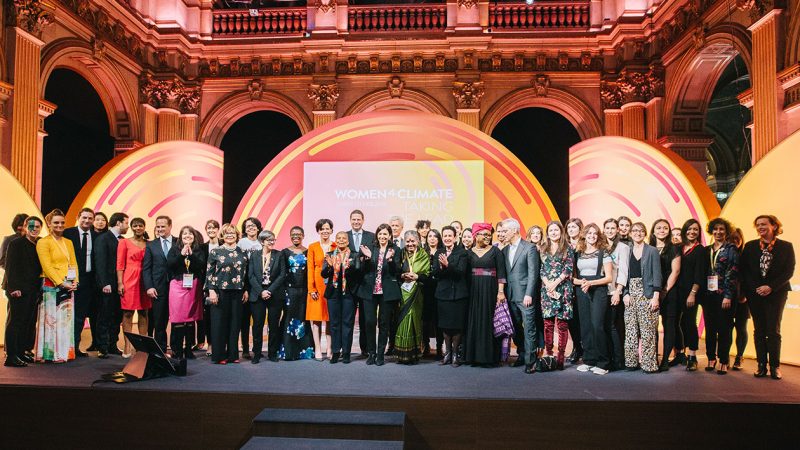 Today in Paris, Mayor Anne Hidalgo is convening mayors, business leaders, and others to bring attention to a troubling problem: While women globally are more impacted by climate change than men, they’re underrepresented at decision-making levels in government.

The good news is, that’s changing. The Women4Climate gathering in Paris is part of a C40 Cities effort to empower and inspire a new generation of women leaders taking on this issue around the world. A report released this month outlines strategies for boosting women’s leadership in climate action and identifies data gaps that need to be filled to better understand the gender dimensions of climate change in cities.

Meanwhile, in the U.S., some of the boldest leadership on climate is coming from women mayors. Here are five who recently won the Bloomberg American Cities Climate Challenge because of their efforts to reduce climate pollution from the transportation and buildings sectors.

As an Atlanta councilwoman in 2017, Keisha Lance Bottoms led the charge for a groundbreaking ordinance requiring all new residential homes and public parking facilities to be ready to accommodate electric vehicles. Now as mayor, Bottoms is accelerating her leadership on the climate issue. She’s fleshed out the city’s plan for running entirely on renewable energy by 2035, for example, and pushed a transportation plan that prioritizes walking and bicycling by adding sidewalks, bike lanes, and improving safety at dangerous intersections — especially in underserved neighborhoods. Bottoms sees these investments as contributing to her goals of creating a more equitable and affordable city. “Creating One Atlanta means building the modernized transportation infrastructure needed to expand residents’ access to jobs and opportunity,” she said, “regardless of their background or zip code.”

With climate change predicted to cause more floods in a city that already sees plenty, Mayor Vi Lyles is addressing the problem head on. In December, she and the city council committed to ambitious targets, such as nearly completely eliminating carbon emissions from public buildings and city-owned vehicles by 2030 and slashing emissions citywide by more than 80 percent by 2050. That will mean dramatically expanding the city’s use of electric vehicles, improving transit access, and taking creative steps such as installing solar panels atop firehouses. “Charlotte has always been a city of reinvention and ambition,” Lyles said. “Working toward a sustainable and resilient community will help create economic opportunity for everyone.”

In a city that is seeing more heavy-rainfall events and choked last summer on smoke from wildfires, Mayor Jenny Durkan is clear that climate change is no distant worry. “Tackling climate action isn’t just about investing in the future,” she said. “It’s about protecting our communities right now.” Durkan is exploring innovative new ways to discourage people from driving vehicles downtown, looking at strategies that have proven successful in London, Singapore, and Stockholm. Meanwhile, she’s offered all public high school students in the city free, year-round access to public transit and is downsizing and electrifying the city’s vehicle fleet.

Over the next two years, Mayor Lyda Krewson plans to put a big focus on reducing climate pollution from large municipal and commercial buildings, whose owners are required to share key energy-related data with the city by May 1. St. Louis also will leverage its PACE financing program to encourage building owners to conduct energy-efficiency upgrades. In addition, the city is putting together a solar action strategy, a big first step toward Krewson’s recent pledge to put St. Louis on a path to getting all of its power from renewable sources. As she said recently, “Cities like St. Louis are stepping up and delivering on a mission to create a cleaner, more climate-friendly nation.”

Mayor Muriel Bowser has put the nation’s capital on a more ambitious track toward renewable energy than leading states such as California. The goal: 100 percent renewables by 2032. She signed it into law last month. This Clean Energy DC plan also aims to slash energy use from buildings, electrify the city’s fleets of vehicles and buses, and ramp up financing for energy-efficiency projects through the DC Green Bank. Washington, D.C. has solidified its “place as the national leader in the fight against climate change,” Bowser said. “If we are going to make progress on addressing climate change and global warming in our country, it’s going to be cities and states leading the way.”