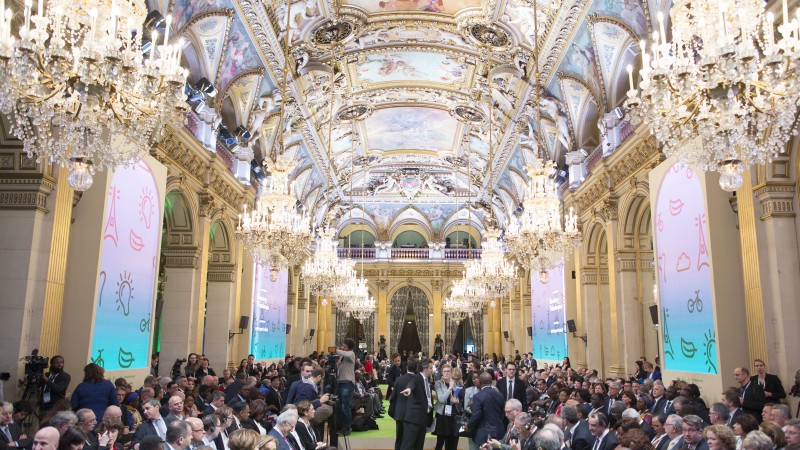 Hundreds of mayors joined Mayor @AnneHidalgo and @MikeBloomberg in #Paris for the #Cities4Climate Summit to highlight the important steps local leaders are taking to fight #ClimateChange around the world. #COP21

In 2015, our work spanned the globe and the spectrum of opportunities, from safeguarding public health on the roads and encouraging local climate action to boosting the arts and empowering women entrepreneurs in Sub-Saharan Africa.

Take an Instagram tour through some of the moments and milestones that made up our year.

@MikeBloomberg: Congratulations to the winners of the @BloombergDotOrg Awards for Global Tobacco Control. Their leadership has led to major reductions in global tobacco use and improved the lives of millions in their countries.

@MikeBloomberg: Prime Minister @NarendraModi wisely recognizes the vital role cities can play in building a strong future for India, especially if local innovation is encouraged and rewarded. The #SmartCities Challenge will help bring new ideas to improve the quality of life in some of the biggest and fastest-growing cities in India and the world.

@BloombergDotOrg: With improved laws, stronger enforcement, and safer vehicles & roads, more than half a billion people are better protected from road crashes – and we have an opportunity to do much more. @WorldHealthOrganization #PublicHealth #RoadSafety

@MikeBloomberg: The more we collaborate, the more we can spur innovation that improves people’s lives. Thank you to #London Mayor Boris Johnson and Walter Isaacson from the @aspeninstitute for a great discussion #citylab2015

@BloombergDotOrg: Here’s some good news most Americans may not realize: our work with the @SierraClub on the #BeyondCoal campaign will allow the U.S. to deliver on its commitments to reduce #carbon emissions.

@BloombergDotOrg: “This program that has come to Rwanda has taken women out of the kitchen and made us visible in business.” – inspiring words from a woman coffee farmer in Rwanda who participated in the Sustainable Harvest training program supported by Bloomberg Philanthropies. #PowerofWomen #LTCoffee

@BloombergDotOrg: “Gleaners” from local communities along the Tañon Strait collect shellfish and other marine life to supplement their diets and incomes. The health of those near the shore directly impacts the abilities of families to feed themselves and make a living. Photo by Yasmin Arquiza.

@BloombergDotOrg: We enjoyed getting a behind-the-scenes tour of the @MetOpera with all of the Instagrammers who joined our #BloombergConnects Instameet last night! A huge thanks to our co-hosts @takinyerphoto and @mc_gutty.

@BloombergDotOrg: Witness the impact of #climatechange as we document 80 tons of ice melting away in the middle of Paris. #PublicArt installation by @studioolafureliasson. #IceWatchParis

@MikeBloomberg: Inspiring day spent with mayors from around the world at #Cities4Climate. It’s more clear than ever that cities are getting the job done when it comes to climate action. #COP21

@MikeBloomberg: Thank you President @BarackObama for a valuable conversation today on @Everytown and progress on #ClimateChange. Photo by @PeteSouza.

Repost @whitehouse: Today, President Obama met with former New York City Mayor @MikeBloomberg to discuss what more can be done at the state and local level to reduce gun violence. The President also thanked the Mayor for his leadership in helping to achieve the historic #ParisAgreement to combat climate change and ensure cleaner air and water for future generations.