New initiative launches on heels of 33 states investigating more than 450 cases of lung illnesses associated with vaping, many of which involve teens and young adults

In response to alarming levels of e-cigarette use among youth in the United States—including a 78 percent increase among high school students in just one year—Bloomberg Philanthropies today announced the creation of a new $160 million initiative to end the youth e-cigarette epidemic.

Goals of the initiative, “Protect Kids: Fight Flavored E-Cigarettes,” include banning all flavored e-cigarettes—and stopping Juul and other e-cigarette companies from marketing their products to children. The three-year program will be led by the Campaign for Tobacco-Free Kids, which will partner with other leading organizations including parent and community groups concerned about the nation’s kids and health. 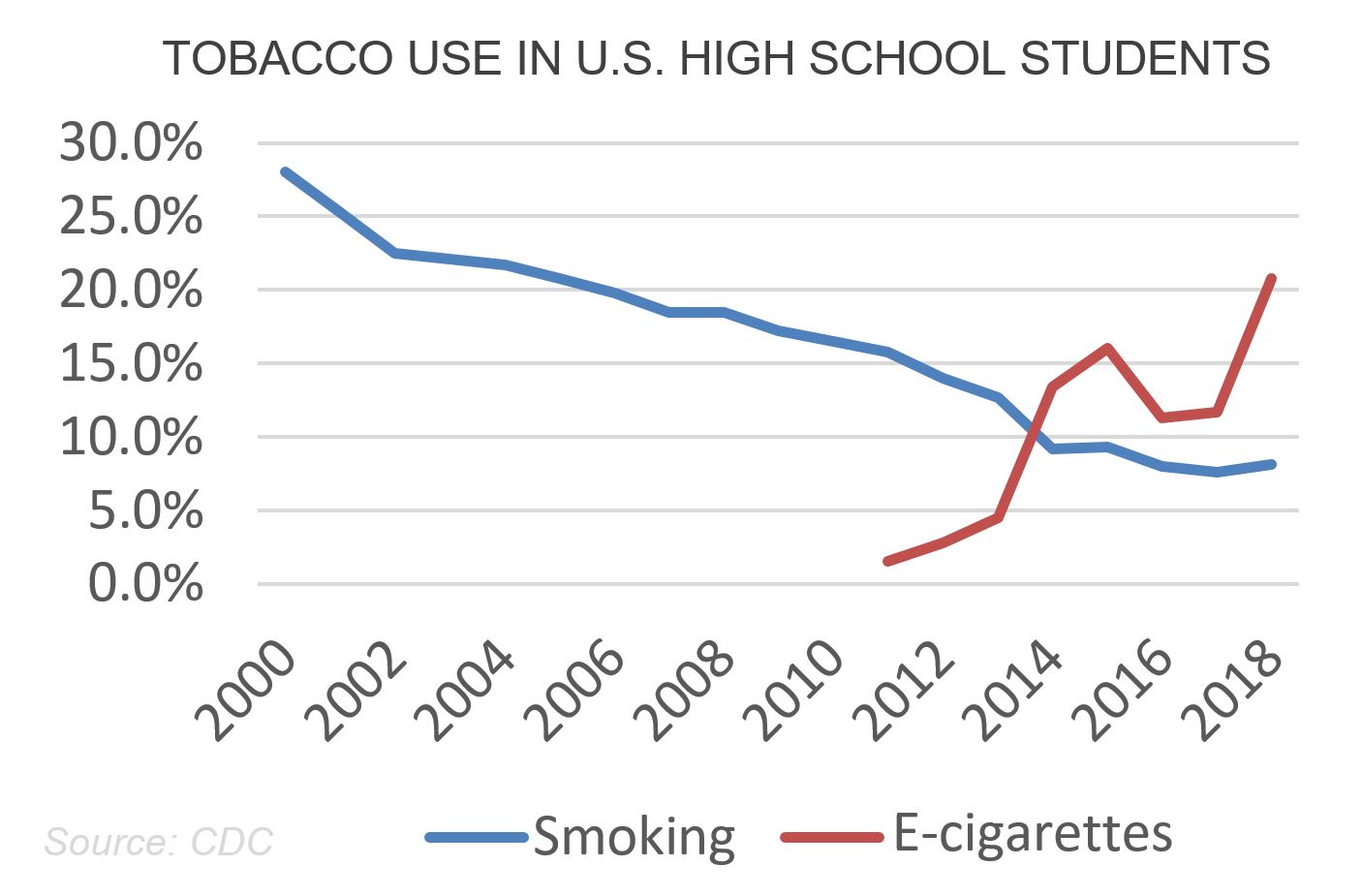 The creation of the initiative comes as health authorities in 33 states are investigating more than 450 cases of severe respiratory illnesses associated with vaping, with many cases involving teens and young adults. A CDC health advisory released in response to these alarming incidents encourages e-cigarette users to stop using these products while investigations into the cause of these illnesses are ongoing. On Monday, the Food and Drug Administration said that Juul, the leading e-cigarette company, has violated federal regulations by promoting its tobacco products as healthier than traditional cigarettes.

E-cigarettes are uniquely dangerous for kids due to nicotine’s highly addictive properties and its impact on their developing brains: adolescent exposure to nicotine can reduce attention, learning and memory. Juul—which now represents over 70 percent of the e-cigarette market in the United States—delivers high levels of nicotine, with each Juul pod delivering as much nicotine as a pack of 20 cigarettes. There is also substantial evidence that e-cigarette use increases the risk of using combustible tobacco cigarettes among youth and young adults.

“E-cigarette companies and the tobacco companies that back them are preying on America’s youth. They are using the same marketing tactics that once lured kids to cigarettes, and the result is an epidemic that is spiraling out of control and putting kids in danger of addiction and serious health problems,” said Michael R. Bloomberg, Bloomberg Philanthropies Founder and WHO Global Ambassador for Noncommunicable Diseases. “The federal government has the responsibility to protect children from harm, but it has failed – so the rest of us are taking action. I look forward to partnering with advocates in cities and states across the country on legislative actions that protect our kids’ health. The decline in youth smoking is one of the great health victories of this century, and we can’t allow tobacco companies to reverse that progress.”

The initiative will support local advocacy efforts in cities and states including legislative and regulatory measures to:

To track youth e-cigarette usage and inform this work, the CDC Foundation will collect and analyze information about e-cigarette retail sales, prevalence of teen e-cigarette use and attitudes of teens about the epidemic. Data collected will help evaluate the impact of state and community level flavored tobacco policies on youth access, initiation and use of these products.

“It is important to gain a deeper understanding of the long-term health effects of e-cigarettes on youth, and the CDC Foundation’s focus is on gathering and evaluating data to better inform effective policies,” said Judith Monroe, MD, chief executive officer of the CDC Foundation. “We appreciate the support of Bloomberg Philanthropies and partners in helping tackle this epidemic to protect our youth.”

“When it comes to individuals who have committed their lives to protecting kids from the dangers of tobacco products, Michael Bloomberg is second to none. We are deeply honored to partner with Bloomberg Philanthropies on this initiative,” said Matthew L. Myers, President of the Campaign for Tobacco-Free Kids. “Tobacco remains the number one cause of preventable death in the United States. This game-changing investment will provide critical resources to help the public health community stand up against Juul and other e-cigarette companies that peddle e-cigarettes to our kids and ensure that we don’t lose another generation of kids to nicotine addiction.”

The announcement of “Protect Kids: Fight Flavored E-Cigarettes” comes just after the 17-year anniversary of Mike Bloomberg, as mayor of New York City, introducing the New York City Smoke-Free Air Act, a landmark law under which New York City became one of the first municipalities in the United States to ensure smoke-free restaurants and bars. The law contributed to a three-year increase in average life expectancy in New York City a decade after its passage, outpacing national trends, and sparked a national movement; today, more than 22,000 municipalities representing more than 80 percent of the U.S. population are covered by state or local smoke-free air laws.

“Michael Bloomberg rightly recognizes that reversing the epidemic of e-cigarette use among youth requires a sustained, robust effort to prevent the tobacco industry from preying on our nation’s children,” said Nancy Brown, CEO of the American Heart Association. “This critical Bloomberg Philanthropies investment will dramatically elevate efforts to support policies that prioritize public health over the tobacco industry’s profits. We thank Mayor Bloomberg for his unprecedented leadership and unwavering commitment to public health and tobacco control in the United States and around the world.”

“We should all be alarmed that after years of decline in the youth smoking rate, more and more young people are vaping, and many of them will become cigarette smokers. Vaping poses a public health challenge that we all need to work together to tackle, so we applaud Bloomberg Philanthropies support of our long-time partner, the Campaign for Tobacco-Free Kids, in this fight,” said Larry Merlo, President and CEO of CVS Health. “The work to advocate aggressively to address youth vaping – especially by encouraging strong FDA action and prohibiting flavored e-cigarettes, a policy we strongly support – requires a strong chorus of voices that we can present working together.”

“Absent FDA regulation of e-cigarettes, tobacco companies are addicting a new generation to nicotine at a staggering pace and luring youth to use their products with appealing flavors,” said Gary Reedy, CEO of the American Cancer Society. “The American Cancer Society and American Cancer Society Cancer Action Network are proud to join Bloomberg Philanthropies and our public health partners in this new campaign to work to reverse the youth e-cigarette epidemic across the country by prohibiting flavored tobacco products including e-cigarettes and compelling the FDA to swiftly exercise its authority granted by Congress to aggressively regulate all tobacco products.”

“The health of America’s youth is not for sale and we applaud Bloomberg Philanthropies for its commitment to helping end the youth e-cigarette epidemic. This support is urgently needed as millions of young people are at risk of becoming addicted to nicotine every day through vaping, making them four times more likely to go on to smoke deadly cigarettes,” said Robin Koval, President and CEO of Truth Initiative. “Daily news reports about the negative health effects of untested and unregulated e-cigarettes underscore the urgency of the crisis and the reality that the tobacco industry, including Juul, is treating America’s youth like human lab rats for profit. Truth Initiative looks forward to partnering in support of this new project and its goals, including eliminating all flavored tobacco products, as we work to make tobacco use a thing of the past.”

“E-cigarettes pose a severe threat to children and adolescents, enticing them with appealing flavors and, in the absence of meaningful federal regulation, causing serious and fatal injury. We therefore applaud Bloomberg Philanthropies for leading a new effort to curb this public health epidemic. The more voices come together to join this fight, the more powerful our advocacy to protect children. We look forward to working with Bloomberg Philanthropies and our public health partners to ensure that children can grow up healthy and safe from the harms of tobacco and nicotine.” American Academy of Pediatrics President Kyle Yasuda, MD, FAAP.

About the Campaign for Tobacco-Free Kids
The Campaign for Tobacco-Free Kids is a leading force in the fight to reduce tobacco use and its deadly consequences in the United States and around the world. The organization’s vision: A future free of the death and disease caused by tobacco. Through strategic communications and advocacy campaigns, Tobacco-Free Kids advocates for public policies that are most effective at reducing tobacco use and save the most lives. For more information, please visit tobaccofreekids.org or follow us on Facebook and Twitter.